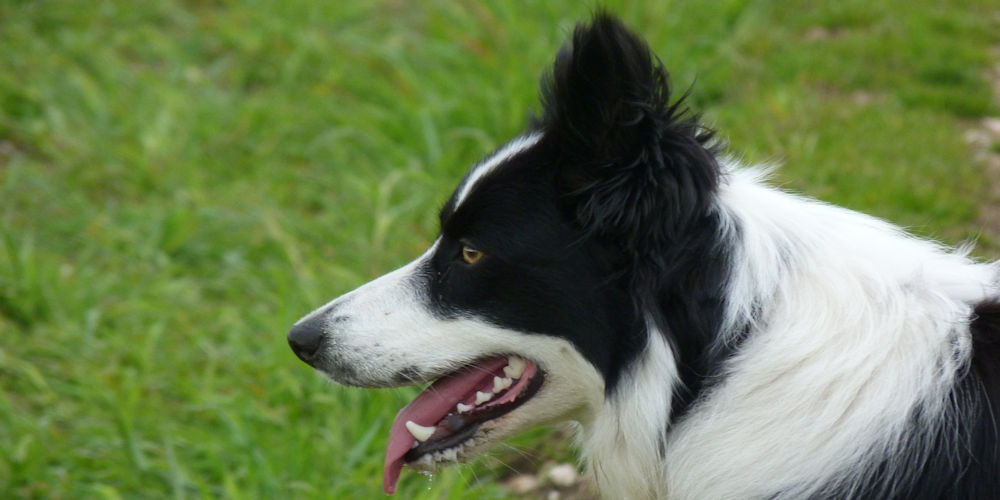 I was in Ambleside with Mist a few weeks ago and the family had decided, in their wisdom, to do some shopping in Ambleside. After 1/2 an hour I was becoming increasingly intolerant and grumpy so we mutually agreed to part.

It was also becoming surprisingly warm and I had left Mist in the car; furthermore there was an area of fells just near Ambleside that I had never visited.

Mist very rarely goes on the lead but I kept her on one as we passed through the park at Ambleside but as soon as we crossed the river in to the woods I let her roam. For the first few minutes she simply raced around in an excited frenzy, too excited to stay in any one place for more than a few seconds – always on the hunt for the next thing. If anyone shows any interest in her she crawls up to them, practically on her belly and wagging not just her tail but her entire back end to greet them. She’s a great favourite with the kids at school and brilliant for any nervous person/child – she just seems to realise their nervousness and if necessary skirts away from them.
Through the woods the open fellside emerges and to be honest it was Lakeland at its perfect best. Green paths wended their ways through the
bracken and the rocky outcrops (the walk is described here in more detail) and Mist was up them all. Something may have attracted her attention in the bracken and she would disappear – all you could here was some rustling and then she would appear ahead of you looking rather pleased with herself for whatever sinister
reason, There were sheep on the slopes and I can always tell when they are nearby as she sinks in to what has been described as a ‘sheepdoggery’ posture, crouched, alert, ears flattened but sticks to me like glue. Fortunately no lead is necessary and it is only when sheep and cars are around that she sticks this close.

On the summit area of the fell (which appears to be nameless) are some delectable very small tarns, a temptation that she is now unable to resist. She has recently discovered swimming and forgotten the stresses of when I taught her to swim and chucked her in. Now I just think it is the cool water she really likes and actually she has a tendency to float round rather than embarking on any vigorous doggy paddle. Mind you it was turning in to a hot day and I was tempted myself, However I satisfied myself by taking a pew on one of the rocky outcrops and soaking in the glorious views, Windermere being particularly impressive. Mist sat beside me and gave the impression of enjoying the views as well but I suspect she was more interested in the Mars Bar or other snack I may have tucked away. When she realised I did not have any she shuffled up and crawled up to a nearby family who were enjoying their picnic lunch. They seemed happy to see her but whether their ham sandwiches survived her attentions I did not wait around to find out.

Being me I decided to take a different route of descent, following a sheep track that soon turned in to pure waist deep bracken. I persevered and then hit a fence that totally barred the route – all I could hear of Mist was some periodic rustling from nearby – I always feel it is up to her to follow me and her problem if she fails to. I skirted the fence for a while (there is a path marked on the map) and came to a stile and knew that I was in for some fun. For all her athleticism Mist is hopeless on large stiles. I crossed the stile and waited on the other side. After a couple of pathetic yelps and some scrabbling her front paws hooked on to the top of the style followed by a desperate head, ears pinned right back. But she failed and with another yelp disappeared back down the other side. She was getting desperate and with the fence being new and offering no opportunities she went at the stile again. This time she got some purchase with her back legs and heaved herself over.

Back in the woods the ceaseless search for something interesting continued and her enthusiasm on returning to the car was less to see the rest of the family but more whether they had bought her something they could ‘share’ with her. They had!