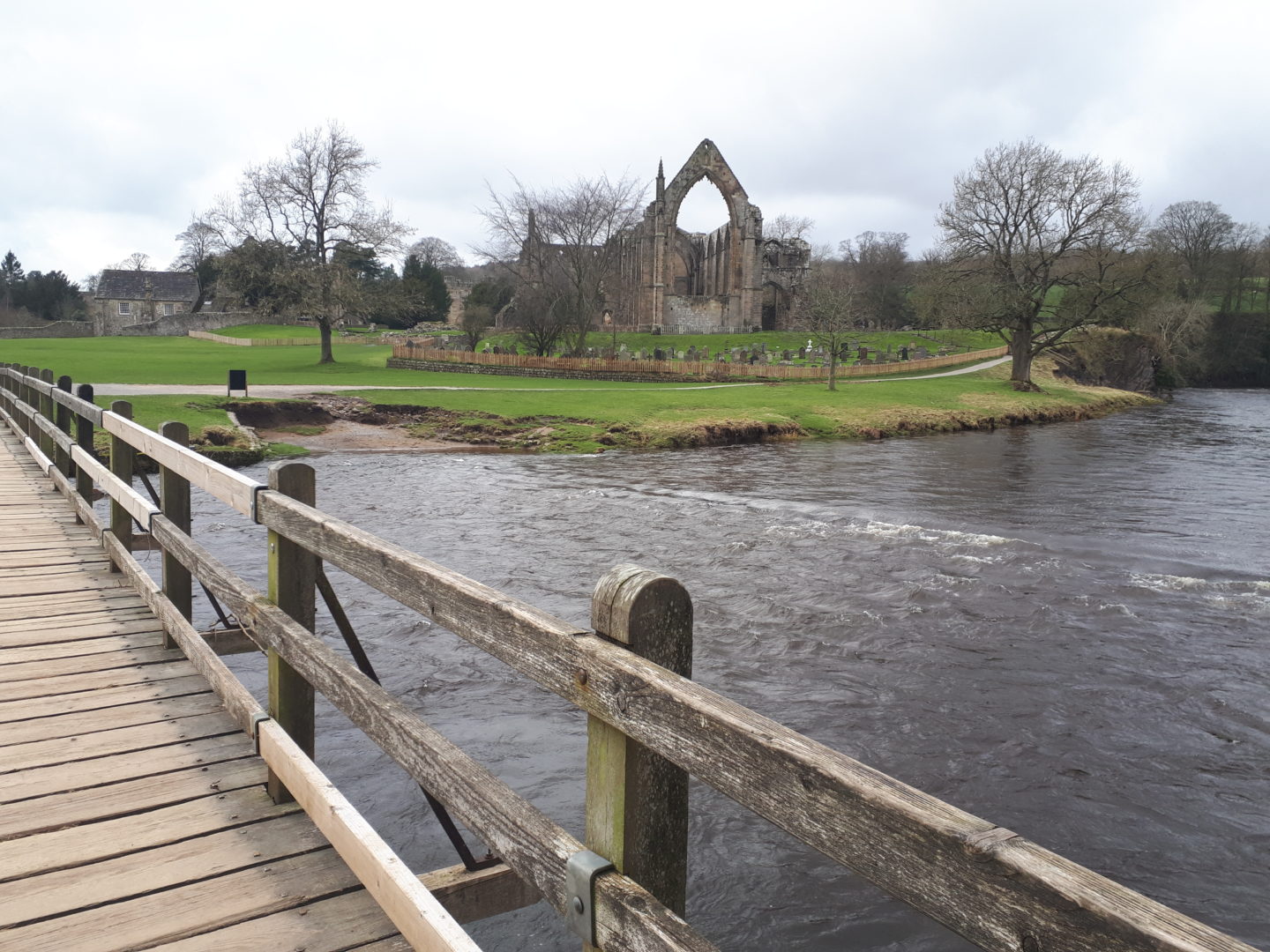 Home > About the Yorkshire Dales > Lower Wharfedale and Skipton

“A landscape created and managed over the millennia by the journey of the River Wharfe.”

The River Wharfe flows serenely through some of the prettiest, but also the busiest villages, in the Yorkshire Dales. The peat laden river provides the focus for the landscape of Lower Wharfedale and Skipton. However the villages are full of interest and the moors which tower over the moors offer some excellent walking. There is history as well, the ruins of Bolton Abbey the most high profile, but there are other famous old houses and castles to explore. Skipton itself does not stand on the Wharfe but the market town is the ‘Gateway to the Dales’ and Wharfedale is close by.

Away from Skipton there are a number of notable villages in Lower Wharfedale. Grassington is almost a town itself and marks the boundary with the more remote upper end of the dale. Further south pretty Burnsall and the fantastically named Appletreewick lie on the river whilst the villages of Cracoe and Linton are nearby. There are pretty hamlets too but a village without a pub is no village at all (to me!). Ilkley is further downstream but is always classed a s part of the Dales.

Historical walks in the Dales

The Rivers of the Yorkshire Dales

Skipton is widely known as the ‘Gateway to the Dales’ for very good reasons. Most visitors driving from the south will pass either through or round Skipton before entering the Dales proper. It is a busy market town and during the summer months (and in particular on market days) it can become painful. However once the day trippers have gone, or you visit out of season Skipton, is a lovely place. It is a great location for a Dales ‘virgin’, offering a base with plenty of facilities whilst you can travel in to the more remote areas and pick and choose your favourite location for future visits. The town is often voted the most desirable place to live in England.

It is rare for a large town to have such great walks from the doorstep, particularly useful if you have no car. A short trip on the canal costs £4 and is worth it, as is a trip on the Steam Train from Embsay to Bolton Abbey if you have a young family.  The fish and chip shop at Bizzie Lizzie’s is a bit of a local institution and the Woolly Sheep is my choice for a pint in town. Finally I would make time to visit the Copper Dragon brewery and the ‘free’ craven museum which is voluntarily funded but genuinely interesting.

Grassington is deservedly popular. Its main street is full of family run shops selling food, crafts and gifts whilst its attractive location above the River Wharfe gives it a distinction which drives its popularity. In reality it is a small town rather than a large village. Across the river is Threshfield, more functional but making the area a major town.  Walking north, south and east is lovely, so good in fact that the area was chosen to film some notable blockbusters such as the Calendar Girls and the final film in the Harry Potter franchise. The town really comes to life though through the festivals and events that take place throughout the year. They are so good and worthwhile I have named a few:

Maps, Courses and Books in the area

Burnsall is supremely situated in the bend of the River Wharfe a few miles downstream of Grassington and is a renowned beauty spot. In the summer thousands come and pitch for the day by the river, many also enjoy the comforts of the tea shops and Red Lion pub. It is a great venue, as is Appletreewick a few miles further downstream. A’wick is much smaller and less popular than Burnsall but still very attractive and therefore much sought after due in part at least to the lovely stretch of riverside.

Other villages of note in Lower Wharfedale are Linton and its village green, Cracoe with its access to Embsay Moor and Hetton with the most famous inn in the Yorkshire Dales, The Angel. All are typically Dales and full of character.

Bolton Abbey and downstream to Ilkley

It would be wrong not to mention Bolton Abbey, the greatest historical and present day influence in the southern Dales. The Augustine monks established the priory in 1120 and went on to dominate the lives and economy of a vast area stretching across many miles north, east and west. It was not until the Dissolution of the Monasteries in 1539 that the monks influence died away (for obvious reasons). However the Priory’s popularity has grown in recent years and is one now one of the area’s most popular attractions. The whole area is owned by the Duke of Devonshire and the estate is very professionally run.

However the Wharfe does not finish at Bolton Abbey and soon passes through the attractive village of Addingham and the Victorian spa town of Ilkley. The town of Ilkley was made famous by the beautiful upland moorland that lies to its south and the folk song with the legend it spurned ‘on Ilkley Moor Bhat’at’. The town itself is well sought after as a permanent place to live but it also makes an excellent base to explore the southern Dales whilst still enjoying a good choice of excellent restaurants. It is also the start of the increasingly popular Dales Way which meanders for 84 miles through the heart of the Dales before ending up at Bowness on the shores of Windermere.

Skipton has enjoyed a long and interesting history, dominated by the impressive Skipton Castle. Skipton is mentioned in the Domesday Book of 1085 but really came to prominence when the Norman Baron Robert de Romille built a castle on the steeper land to the north of the present centre. The original wood building was soon replaced by a stone keep constructed specifically to keep the marauding Scots at bay. In 1310 Skipton Castle was granted to the Clifford family with royal approval and the family owned it for the next 350 years. Lady Anne Clifford being the last benefactor. Its following claim to fame happened in 1645 when it became the last stronghold of the Royalist army, holding out in siege for 3 years against Cromwell’s Roundheads.

Today the castle offers an interesting 2 hours, there is no interior as such, just a walk on stone as the castle was, no pretensions but a true castle experience. However for an entrance fee of just £8.10 (2019 prices) is in my opinion good value but if you do not fancy paying at least enjoy the free walk through the woods behind the castle.

Away from the castle!

Away from the castle the development of Skipton has alternated between sheep farming, cotton mills and more latterly tourism. Main Street which is now a general traders market used to be a traditional sheep market with sheep being brought in from miles around. Sheep Day has been celebrated for years but this was extended in 2010 to a Flock to Sheep Festival with a set of present and historical Dales celebrations. The construction of the Leeds to Liverpool canal, completed in 1816 , transformed the landscape of Skipton during the 19th century. Ten large cotton mills dominated the life of the folk living near Skipton and it was not until later in the 20th century when tourism came to prominence that Skipton became (relatively) prosperous again.

Grassington and the moors nearby are of notable archaeologically importance. Two celtic villages and other bronze age settlements are nearby and signify a lengthy past. Lead mining on the moors above Grassington was developed in the 15th Century  but it was not until 300 years later that a smelting mill was built and the industry professionalised. The opening of a side wharfe from the Leeds Liverpool canal helped connect Grassington with the wider market. By the 1870s lead mining was dying in the valley and leisure took over, the railway came and encouraged an era of commuting (to Bradford usually/sometimes as far as Leeds) and finally it became a centre of tourism.

The Best Walks in Lower Wharfedale and Skipton

Click on the walk name for further details of each walk.

In Sight of Simon’s Seat. Appletreewick is often passed by on the way to Grassington but moors above offer a lovely and varied walk.

Circuit of Grimwith Reservoir. A quiet, peaceful and short walk on excellent tracks with good views.

Cataracts at the Strid. The River Wharfe flows powerfully through the countryside above Bolton Abbey.

Lead Mines on Grassington Moor. Explore the industrial history of the Dales in stunning surroundings.

The Villages of Wharfedale. A riverside walk along the Dales way taking in 5 villages, all of character and some distinction.

Bordley under Malham Moor. A quiet walk through some nice limestone scenery and isolated farmsteads.

Cracoe & Rylstone Cross. Explore the lovely escarpment which was made famous by the film, the Calendar Girls.

Ilkley Moor Baht’at. Myths and legends cloak this moorland scene in a popular walk via the Cow & Calf.

Gargrave and Skipton . Discover the lands between Skipton and Gargrave including along the Leeds Liverpool canal.

Sharp Haw from near Skipton. A Marilyn to the north of Skipton provides a pleasant walk and return through the forest.

Discover Skipton Moor. An easy walk from the east side of Skipton on to the hills with great views back  over the town.

Simon’s Seat via the Valley of Desolation. The moorland hill of Simon’s Seat dominates the estates of the Duke of Devonshire.

Beamsley Moor from Ilkley . A forgotten world, peaceful and pleasant awaits as you head to Round Hill.

Embsay Steam Railway. A short but lovely stretch of steam rail through the countryside to Bolton Abbey.

Cavendish Pavilion. An excellent place to grab a drink or have a long leisurely meal on the banks of the River Wharfe.

Hesketh Farm Park. A great day out for the family on this 600 acre working farm near Bolton Abbey.