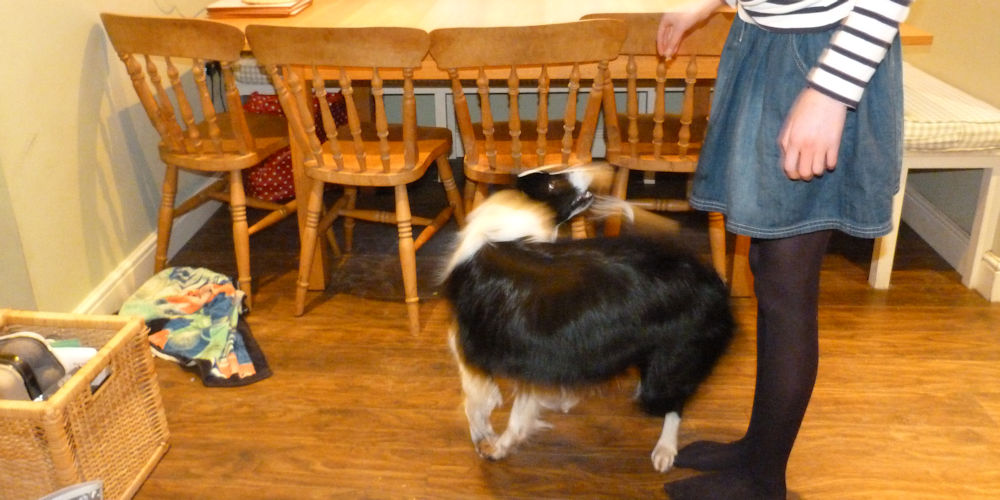 Handing over to Charlotte. Mist’s trick trainer!
Taking Mist on a walk is high-quality entertainment.

Stalking sheep is a must have, she slinks along a ditch, ears flat, never taking her eyes of them despite the fact that they don’t seem to be intimidated by her at all.

She isn’t that great at catching balls as there is often wild scrabbling after it before it falls in the beck and catching it first attempt is a very rare occurrence. I find the funniest thing of all is when she tries to get up stiles that are much too tall. She leaps up, her back legs lose their footing, there is a wild scramble and she falls flat on her back with a loud yelp of shock. So, not the most coordinated dog in the world, however…

Lately we took Mist to Agility lessons. Though she didn’t like the horses which were based there very much she loved all the agility part of it, especially jumping, though she never did master “weave” as it was far too slow for her. When competition time came around she won 2 firsts and 2 seconds and thoroughly enjoyed all the dog treats she won as a prize. There were lots of other dogs there that she made friends with; in particular Nellie, a Collie cross and her biggest rival (winning the other two firsts) and Bosan, another collie.

After the success of the agility lessons we decided to try Flyball. Tennis balls, jumping, speed. What could go wrong with Mist? A lot, as it turned out. At first she got spooked by the horses banging against the walls, and then she wouldn’t even go over the first jump and showed no interest whatsoever, just sniffing around the doorway wanting to leave. We came up with the theory that it was just too boring for her and she needed more mental stimulation. To be fair, learning (or trying to learn) to operate the box at the end was pretty boring and we froze to death! Therefore, we swapped Flyball for agility and that went much better (How could it be worse?), though she still didn’t master weave.

All the time we were taking Mist to agility, I was teaching Mist tricks at home and we’ve got to a grand total of 12 tricks so far. My personal favourite was weaving through the legs but Mist enjoys putting her front legs on her back and looking around, admiring the view from a high distance. Some more favourites are the good old “spin” “roll over” and “hi-five”. Dad’s positive “meercat” when she balances on her hind legs (to cat watch out the window) will be a winner but she seems to associate it with cats/birds and runs to the door and barks her head off. I’m planning to teach her to be a goalkeeper for our holiday in Wales but we’re not sure if after she gets her hands on it our balls will ever be the same again. However, maybe we’ll see her as the very first canine goalkeeper later this year!”

Here is a short video of me and Mist in action!.