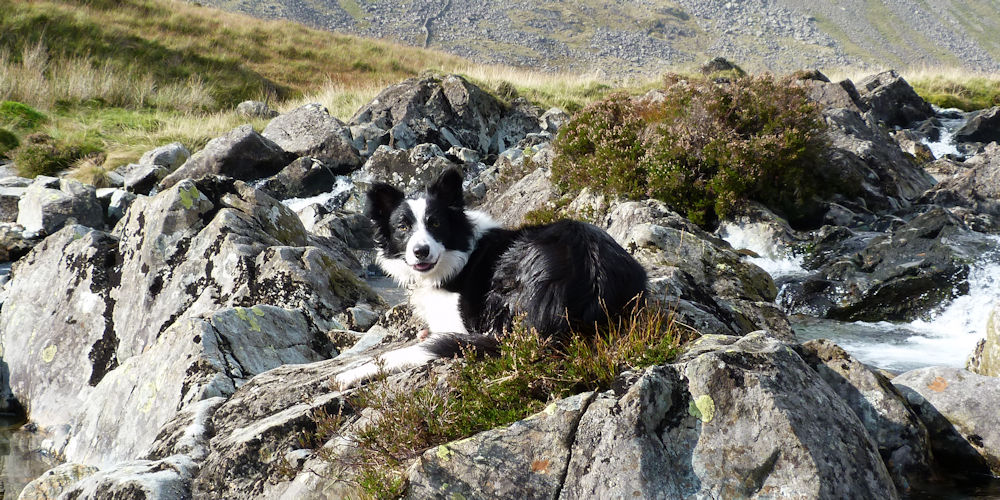 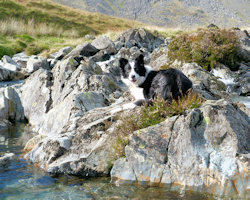 Before winter encased us all in its icy (or so it seems) grip myself and Mist headed off for a couple of days in the South West lakes and in particular Wasdale & Eskdale. My favourite (cheap and near the pub) campsite at Wasdale Head provided the base with Mist delighting in being allowed to sleep next to her master – curled up and barely moved for the entire night. Only when the British army moved in to take up the remainder of the camping field did she stir but aside from a little woof she was suspiciously quiet.

Day 1 involved the classic route over the Scafells, loved by many and  loathed by some but undoubtedly the only sensible way to capture both 3,000 footers 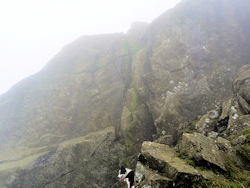 in one go (actually not so sure about that – Eskdale is another option). We took the Lingmell route on the way up to avoid the worst of the erosion but soon found ourselves in cloud – dreich as the Scots love to call it. Mist was unperturbed and skated over the summit boulders to greet the 15 members of our armed services at the trig point and sharing whatever bully beef she could extract from them. Finding Mickledore in the muck always proves testing both in navigation terms but also the wet and slippery boulders and on arrival decided the grim looking Broad Strand was not for us. Mist however did make an attempt on the Stand but it was not going to happen so we dropped down to the entry of crumbling Lords Rake. Mist was still enjoying the scrambling until I took the wrong chimney out of the Rake and ended up a creek as the saying goes. Mist has the habit of attempting anything that is ahead 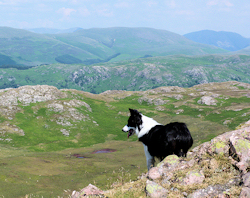 and actually fell 12 foot as the chimney simply gave out. Unperturbed she was about to try again till I hauled her back and we retreated back on to the main gully and the correct chimney. Lords Rake is challenging and badly eroded – death appearing to loom in the form of an overhanging boulder just waiting to crush an innocent collie and her master.

Day 2. A glorious warm and sunny day greeted us (not that Mist cares) and a full day exploring areas of the Eskdale valley I know very little about. The east flank of the valley near the Woolpack is one of those great areas of minature lakeland I am sometimes reluctant to talk about (but I will) – all I can say is visit it, it is absolutely lovely and full of interest – Mist had a swim in the tarn and even I was tempted. After sharing a pork pie at lunchtime (not that she would ever share her own dinner even if I wanted to) we headed on a low level walk in to Upper Eskdale. 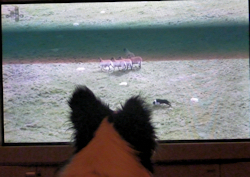 Upper Eskdale is simply marvellous and I have described the walk here but if you ever want to camp in an amphitheatre of mountains with no-one else near this is the place. A few interpid walkers were assaulted by the dog although she was as baffled as me by a couple in wet suits frollicking in the deeper pools of the Esk. Mist’s crowning glory was walking off a lead through a crowded field of sheep without disturbing one. She is under control when sheep are in the area but still insists on taking up the tense sheepdoggery stance that would not necessarily convince a farmer she is. Hey ho…collies! 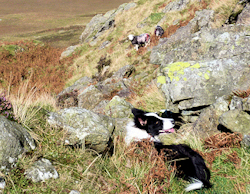