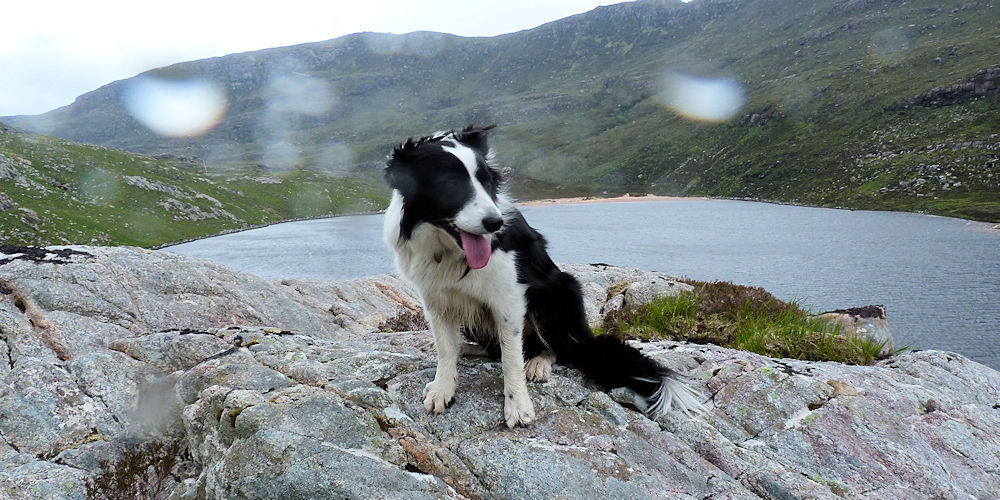 4 days camping and walking in Ullapool is surely any dog’s dream, it is certainly Mist’s. Last week, myself and my two hill climbing brothers met in Ullapool for our annual pilgrimage to conquer the Scottish hills, mountains, rotten beer and midge.

This year Beinn Dearg and a selection of the Sutherland Corbetts were on the agenda which, of course, meant nothing to Mist who just wants hours and hours out and about in the great wilderness which so characterises this part of Scotland.

Following the endless trawl avoiding the road works on the A9  (when will this road become dual?)   a near midnight arrival at Inverness meant the car was parked up on a lay by and myself and Mist ‘shared’ the experience of a night in the boot. I had forgotten how unpleasant this is, cramped and uncomfortable, although following the frustrations of the long journey Mist was full of energy and mischief. Not only did she succeed in bringing in to the car an army of midge attached to her coat but during the wee dark hours continually stuck her nose in to my face for a quick lick, always timed to disturb the few times I had actually dropped off. Not a great start.

Next morning we pitched the tent on the excellent campsite on Ullapool, discovered there had been no rain in the area for nearly 2 months and joined Barry for the memorable crossing of two excellent Corbett mountains Cul Mhor to Cul Beag. Released from the car Mist simply raced up the first hill stopping only to disturb some mountain hares and angry nesting birds and seeming determined to lead us into and over shear rock faces or deep boggy lands. She only returned when we stopped for a breather to beg for food. Sadly we had only brought 2 Mars Bars with us but despite this she scrounged a chunk off Barry which only doubled her energy and enthusiasm. (chocolate apparently poisons dogs but I have never noticed it with my two!).

The crossing of the Cul’s is a fantastic crossing although the col at 80 metres is depressingly low in an area of wilderness which so typifies the best of Scottish walking. We met no-one but that did not matter altho’ I did find the steep pull up 2 and 1/2 thousand feet to the summit of Cul Beag really tested my patience. Even Mist was slowing down and as we soaked in the wonderful views of loch, sea and hill from the summit she simply lay down, closed her eyes and went to sleep!

My two man tent was awaiting us back in Ullapool and, unlike the first night in the car, she simply curled up and snored soundly through the night. Even the late night stroll along Loch Broom did not impress her which is a shame as it is a lovely tranquil scene. Having said that her friendly nature took her off to visit many fellow campers (or was it just their food!)

Next day though she was raring to go but we were not! Myself and Barry had a quiet morning discovering the book and photography shops of Ullapool before venturing off north to the corbett of Canisp. Ears pricked and with an outraged look on her face she watched from the boot of the car as I came and went without inviting her out to ‘play’. They say collies have patience, well it is safe to say that this tested her to the full. However an afternoon climb of Canisp (a 2,500 foot peak with outstanding views… it was cloudy) cheered her up although I would add that her route finding is not good. Bracken (my old collie who died last year after completing 120 Munros) stuck to the path and, although always being ahead, seemed to pick the right path. Following Mist I suspect would mean the end of my days in some highland swamp or over a cliff edge.

Saturday was our biggest day and Alistair joined us on an 8 hour round of the Beinn Dearg range. This is a big day but Mist’s energy levels never flagged and even towards the end she was stalking sheep  in that sheep dog pose that she always uses whenever they (or cars) are nearby. Earlier on the walk she had disturbed a variety of frogs and nudged them down the hillside  – every thing that moves is a fascination to her. The weather was somewhat mixed on the Deargs but made no difference to her – she was in her element.

Sadly that was our last major day on the Scottish tour but another night in the tent, with driving rain outside (we always manage to break any drought) was followed by another Corbett near Aviemore. I went there in a vague attempt to beat the weather but failed as it tipped it down near the summit – bizarrely though the worst weather and the least interesting mountain seemed to bring the crowds out which in its own was as stimulating for Mist as much as longer days, sheep and craggy slopes.

So she returned south to the more familiar Yorkshire Dales but, like me, cannot wait to return to some proper mountains and wilderness walking