Two of the Dales 30 mountains lie to the east of the long valley of Mallerstang. The walking on the slopes of High Seat and Little Fell is rough but the views excellent.

The broad ridge on the east side of Mallerstang creates less attention than Wild Boar Fell to the west  but is an equally enjoyable walk. At least the higher parts of the ridge are, some of the lower slopes are hard work and are almost exclusively trackless (what ever the O/S maps would have us believe). High Seat is the 4th highest summit in the Dales and only receives 10’s of visitors a year as opposed to the thousands that pass by the Top 3, Whernside, Ingleborough and Great Shunner Fell. It’s a shame because the whole area is full of interest, historical and environmental. Where else can places boast a history including King Arthur, Lady Anne Clifford and Dick Turpin!

I have tackled these fells from both ends of Mallerstang and prefer the route from the south, starting near Garsdale at Aisgill Cottage. The climb is steep and rough to Little Fell but once the summit is reached it is a really pleasant walk over such finely named summits as Hugh’s Seat and Gregory Chapel until High Seat is reached. The descent follows the rim of Mallerstang Edge to the broad shoulder of the Riggs which in turn has some great views to the south and west as well as being an easy descent to Hell Gill Bridge.

There is also a straightforward climb of High Seat from the north which has some excellent views. Unfortunately for anyone wanting to do both mountains it is not convenient.

On the return down the Riggs head to the stones on Gregory’s Seat and then leave the path to Little Fell and head just west of south. The Riggs is a broad grassy ridge, keep to the highest part throughout the descent. 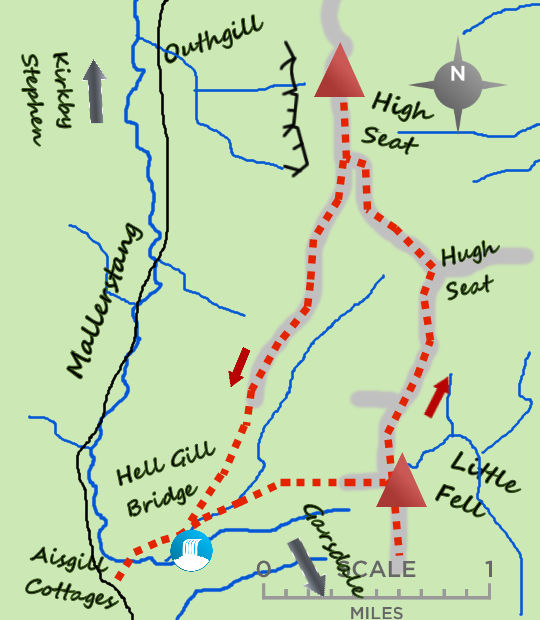 Rough on the lower slopes but ok (wet in places) on the broad summit ridge.

The Moorcock in at Garsdale Inn is a fine pub well worth a visit for a pint, pot of tea or food.