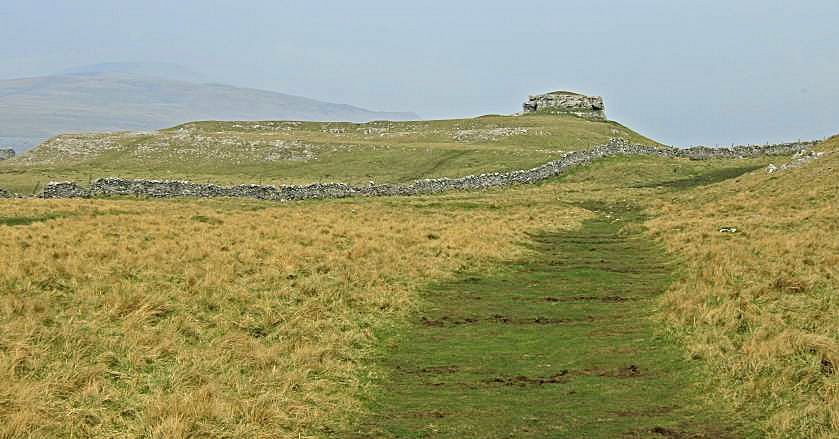 A limestone walk from Conistone heads up Conistone Dib to Conistone Pie. It also aims to find one of the remotest spots in England near Mossdale Edge.

Much of the pleasure of walking in the southern Dales is due to the excellence of the paths; short grassy highways, unspoilt by thousands tramping on them and churning them up. After the initial climb from Conistone the gradients are not steep and it is easy to stride out whilst taking in the views as you walk. The limestone scenery dominates the scene with a particularly impressive pavement to be found to the south just after the Dib. I recommend starting the walk by entering the narrow limestone gorge of Conistone Dib, a spectacular dry and rocky valley surrounded by limestone scars, an unusual spot which is unique in the Dales and I can only liken to the Olgas in Australia.

Ending the walk past the radio mast may seem disappointing but is compensated by the views across to Kilnsey Crag and the memory of the surprisingly symmetrical shape of the Conistone Pie which dominates the return 1.5 miles of the Dales Way. Above Capplestone Gate there remains some evidence of the lead mining that occurred in the 19th century. Ancient arable fields can also be picked out above the village.  The church in Conistone is reputed to be the oldest building in the entire Craven area – well worth an explore.

The O/S pillar at Capplestone Gate has wonderful views for a picnic spot.

Walking through limestone rock can mean paths are difficult to follow. This may be because of the exposed rock or just that the grassy paths are on such thin soil and it becomes bare rock. This happens in the area above Conistone. 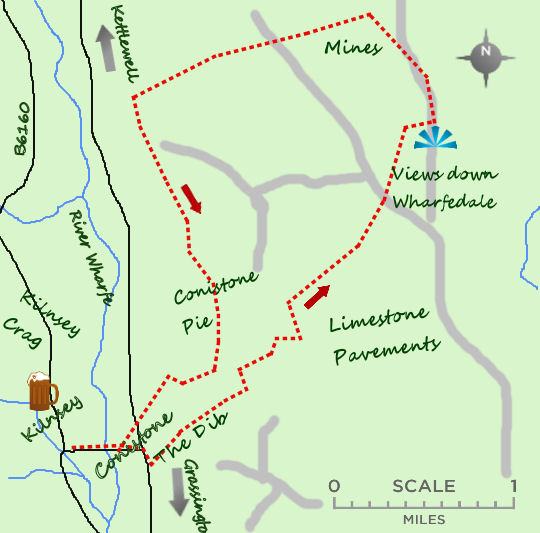 No parking in the village but there should be space near the bridge over the Wharfe on the minor road.

Aside from the rocky path up the Dib the walking is easy on wide grassy paths or bridleways.

The Tennants Arms over the main road is an obvious choice but the coffee shop at Kilnsey Park has some interesting snippets of the area.