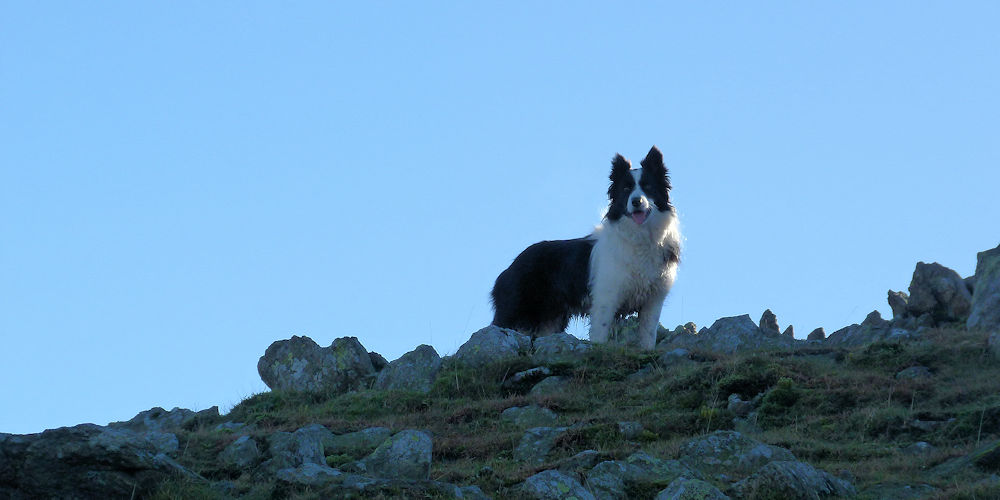 Home > Why walk with a dog?

Why walk with a dog?

Mist, and Bracken before her, have been my constant companion on walks, whether struggling up the high fells or a simple half hour stroll round Long Preston beck.

It may be obvious to anyone with a dog the pleasures that walking with one brings but for those who do not see it here are my top 10 reasons to walk a dog and an excuse to put some photos of Mist in to her summer blog.

Whatever the weather, whatever the walk Mist loves being out and about. I have walked her along city streets (the traffic holds a worrying fascination), dodgy estates (always things to eat), fields (things to chase), hills (she now understands the power of a summit cairn) and full day rocky scrambles (see below)  yet she treats each walk with exactly the same enthusiasm. The enthusiasm cannot help rubbing off on you and 99% of the time you feel better at the end than the start of the walk.

2. Bad weather not a problem.

Every dog walker has at some stage looked outside and thought NO. The weather may be foul, there is something good on TV or simply  they just do not fancy the idea of going for a walk. However one look at your dog’s eager face and pert sit and you know you have no choice, the coat goes on and out you go. Particularly in the winter months, when little else is happening, the health benefits of taking a 1/2 hour walk, twice a day are enormous. Mist and Bracken have never suffered the catastrophe of missing their twice daily walk.

When I did a normal job I often used to walk Bracken in the dark at night and sometimes in the morning. As we live out in the country I remember thoroughly enjoying it, particularly when the skies were clear. Watching the winter months pass by by observing the size and position of the moon, viewing the stars such as the Plough and Orion’s belt were just some of the pleasures. However I also liked to be out when it was pitch black on a moon free night. Bracken certainly helped develop my night vision, walking in the dark has never been a problem.

Often I just watch Mist’s antics on a walk. She rarely plods along beside you (she may when she is older) but is darting around, sniffing, watching, listening and awaiting for something to happen. I’ve seen here bunny hop when spotting a frog or mouse, scared out of her wits when a deer flew past unexpectedly, fall in to stream whilst stalking sheep (she never chases but does stalk) and produce sticks that simply will not go through a stile. Most times she does not do anything so daft but just watching her joie de vivre makes me smile.

Mist is very nimble and loves being on the rock. Recently I was on Lord’s Rake on Scafell when I took the wrong gully to the summit. Mist was ahead when I decided on an ignominious retreat when the next thing I knew she hurtled past my head in a 20 foot jump. She, as ever, landed safely. Wherever I can go she will find a way to join me, possibly not the ‘traditional’ route,  and having seen a dog on the rocky slopes of Sgurr Alasdair I am sure she could do that much more.

As someone who does a lot of walking on my own having a dog is the best of all worlds. She is a companion but unlike the human companion you are not obliged to vary your pace, make conversation or discuss a route – they are all your choice and one of the pleasures of walking on your own. Other people sometimes look at a solitary walker as a bit strange but with a dog that is never the case. The main problem is she does not bring her own sandwiches and feels mine are to share.

People do want to talk to you if you have a dog. Whether fellow walkers or others the dog provides a source of conversation. The other day I was approached by a shepherd who had seen Mist and had come across for a chat and presumably to see she was well behaved. He went on to tell me how Border Collies bred in the UK were increasing useless to him as sheepdogs as they are deemed too soft. He proceeded to show me his own fierce looking animal which he announced was from New Zealand! Its amazing what you learn.

Unless a walk involves some serious scrambling or copious amounts of sweets the girls pronounce all my walks as boring. However the single thing that does keep them interested on a traditional walk is Mist and her various antics. In fact the eldest has now taken to coming home from school and taking Mist on her popular round the beck at Long Preston….except when it is raining and I suspect when the temperature starts to drop in Autumn!

As many of my walks involve finishing with a nice pint of ale in a country pub it is important Mist is a good pub dog. Aside from sharing my crisps (clearly helping my health) and trying to share everyone else’s she is pretty good. Particular when there is a good fire she settles down well. However she once escaped from the table I was on (a clever knack she has of removing herself and her lead which is tied to the table) and only re appeared when led out of the kitchen complete disgrace.

As a lover of football and the way the timings of the games are on in this World Cup I could easily never get out for the evening walk. Of course I would for reasons mentioned above but tonight I have just had a splendid hour long walk around the 8 Stiles walk at Long Preston. Mist was at her frisky best but the later summer light was glorious. It is one of the pleasures of the summer being able to walk in shorts and a tee shirt and be pleasantly warm. Thanks Mist, now for Brazil.