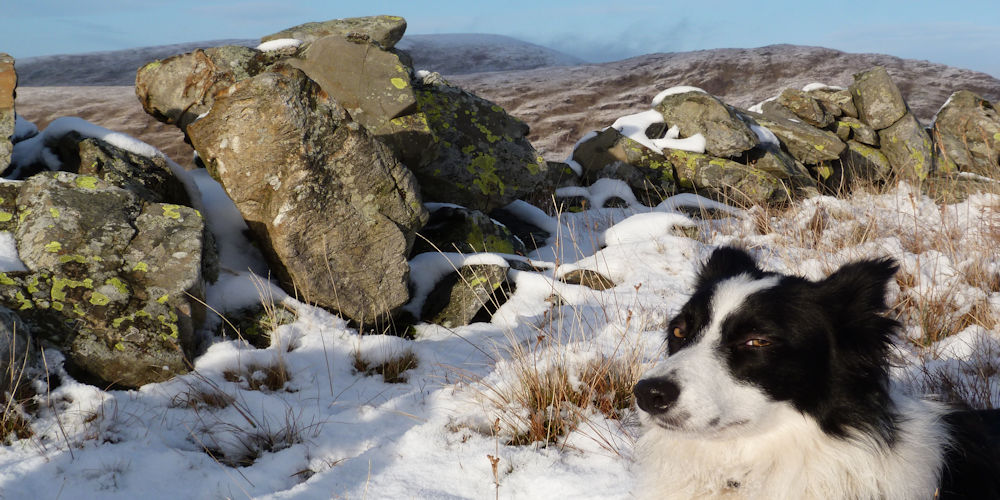 Snow was lying on the hills as I took the relatively short drive to these excellent fells in the far south west of Scotland. This was our first snow walking of the year and there was little doubt both myself and Mist would have a frollicking good time.

We did. Day 1 we headed towards the Merrick but due to a late start never actually summited. However the snow was on the road in and knee deep up to the 550  metre mark which is pretty much the highest that we got to. Mist was in her element, roaming far and wide and covering at least 10 times the distance that I did – she never stopped but sadly I did, walking in snow can be hard work!

She even enjoyed the vast swathes of forestry which dominate Galloway, disappearing for many minutes in to the dark depths. After a while I realise that she is not within sight and start shouting, naturally she soon appears with with an expression that clearly says ‘keep calm, what’s the problem?’

The views over Merrick and its neighbouring Corbett, the Shalloch were perfect with icy blue skies, no wind and crisp white snow offering perfect conditions.

On Day 2 I headed off to the Corserine, an elegant Corbett a few miles to the east of the Merrick. Conditions were not so good with a cold, strong wind blowing in frequent hail showers and removing the hills of much of their snow. The summit plateau was exposed but Mist seemed completely unfazed aside from when I made her pose for a few summit shots.

A look of weary resignation can be seen clearly on the photos. Actually when I stop and delve in to my pack for the camera she shows a lot of excitement but that soon turns to disappointment when biscuits are not produced. I do not think dogs quite ‘get’ cameras.