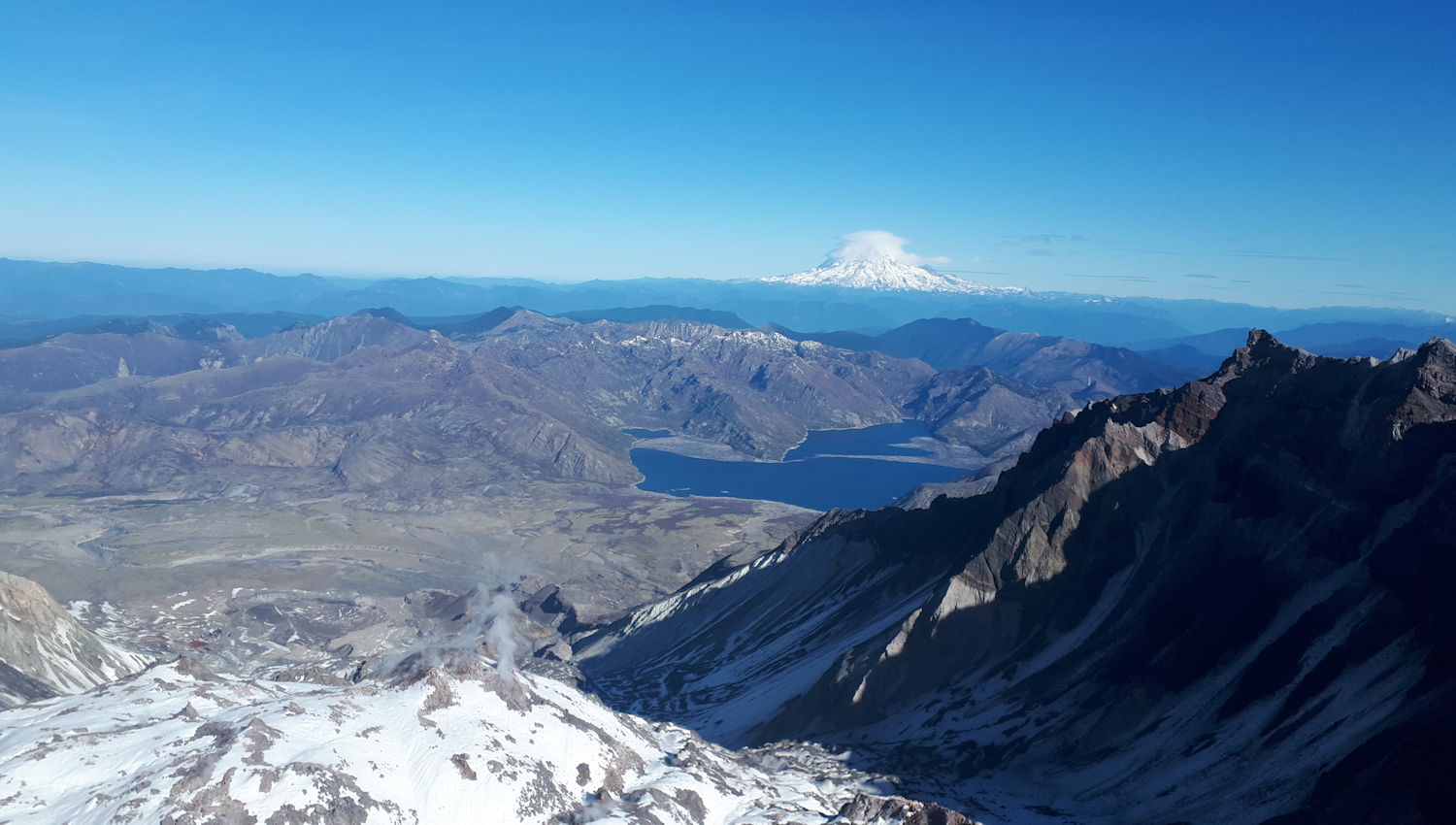 Home > A Climb of Mount St Helens in the States

A Climb of Mount St Helens in the States

Mount St Helens is a stratovolcano situated in the State of Washington on the north east seaboard of the United States. It is infamous for an eruption in May 1980 that killed 57 people.

A climb of St Helens at the end of October. I was out in Oregon visiting Charlotte and by a happy coincidence a day emerged where the family wanted to shop in Portland and the weather was set fair. Before travelling I had looked at the possibility of a good climb/walk/hike (somehow hike was the right word for this but never is in England) and Mount St Helens looked perfect. I did obtain a climbing permit (100 are released daily but I reckon the day I was on the mountain there was no more than 40). Trying to find actual information on the route was not easy. Mixed reports suggested it would take anything between 7 and 12 hours, there may or may not be snow and to be careful (whatever that meant).

Getting to the Climbers Bivouac (Start)

The first challenge was of course finding the start (Trailhead). I had no satnav in the car and trusted my own judgement. In essence from Portland it was a drive north up the I5 to Woodland and then take the 503 to a place called Cougar. From there I would enjoy the challenge of working out the rest of the day. I left at 5.30 and encountered my first surprise. The I5 was packed! The Americans start work earlier than us. Leaving the I5 at Woodland was fine and within a few miles the road was nearly empty. It was still dark as I approached Cougar, a small settlement full of ‘mid west’ character.

I was hoping that there may be some clue in Cougar where to go and I was not disappointed. The shop at the small petrol station not only had a scratty little map showing the route to the Trailhead but also offered me a coffee. The road narrowed soon after Cougar and in the pre light of day became a little spooky in the trees. This was not helped when I missed the turn towards the Trailhead and continued along a forestry road with the trees closing in. After a dodgy 3 point turn I recovered the route and soon ended up in a mid size car park in the thick trees. There were toilets and some rough information as well as 10 other cars. Arriving at the start in good time had been one of my biggest concerns.

An obvious path left the Trailhead (Climbers Bivouac) next to a small shelter and a good path headed in to the trees. This is where the American waymarking is definitely beneficial. The woods are endless and, although the path is quite obvious, any wrong turning and frankly your doomed. There is very little chance of recovery. Fortunately the National Park have added a number of small blue diamonds stuck to the trees to ensure the walker does not go astray. I saw no-one with a map all day.

Walking through the trees in the half light is definitely eerie. It is different to our forests or woodlands. Added to the sense of unease was the knowledge that bears and other animals lived in the woods. It is also clear why many old style horror movies are set in ‘the cabin in the woods’. The woodland path climbs steadily for over 2 miles and 1.000 feet before breaking out on to the bare mountain side.

After the darkness came the light. I was fortunate that the weather was superb all day, the views magnificent and the way forward clear. The blue diamonds did carry on up the boulder field but were more intermittent. They were not on the top section. The landscape was simply a mass of boulders, obviously blown out from the volcano when it erupted. I can only liken the underfoot to the summit area of Scafell Pike, just steeper. Initially a half path winds its way up to a wide boulder ridge (the Ptarmigan Trail) which I must admit to finding exhausting. Once on the ridge the final crater rim appeared in the distance.

The Climb of Mount St Helens

There were a some other people on the walk/hike but, considering the weather, very few. Certainly not the 100 that the permit allows. Many of those on the day clearly gave up as I believe only about 20 ever made the summit. It is a very tough walk. The boulder field seems endless. In fact it is over 2,000 feet of climbing in 1 1/2 miles with not one footstep not requiring some concentration. However the effort was more than compensated by the views which were very special. As I climbed above the treeline the scale of the country below stood out. Endless forests to the south, barer land to the east and no civilisation in site. I spent much of the time imagining the thoughts of the pioneers who first came to these parts following the infamous Oregon Trail. Amazing people indeed.

About two thirds of the way up the boulder field there is a small satelite station. Here measurements are taken about the volatility of the volcano and any pressures or signs of a future earthquake or earth movements. It is one of many such monitoring devices down the west coast of America, the word from all the locals is that ‘a big one is coming’. Having gained some breath after an initial push up the boulders I started enjoying the climb more and more. I was delighted to also see a border collie with one of the small groups (who did make the summit). They get everywhere.

Eventually the boulder field ends and the landscape changes. The final 1 mile to the summit must be like walking on the moon…except steeply uphill. A thin coating of ash sits on top of the bedrock with a few small pebbles still rolling downhill. My mind went back to Frodo and his final climb of Mount Doom, It could have been filmed here. A faint path headed up to the summit rim. To my left a large patch of snow filled a wide hollow, some people better equipped than me had clearly glissaded down.

The final 500 foot climb has been described as 2 steps up and 1 slip down but I found it ok. There was some ice around when I was up and a slip could have been costly but even without the snow this final climb is very exposed. It is not a place for the vertigo sufferer. There were a few people completing this section, the couple coming down shouted excitedly at me how good it was at the top. They were correct! Suddenly the path emerged on the crater rim, another few steps and I would have plunged in to the crater itself. As I said before it is not a place for vertigo sufferers.

However it is without doubt one of the most awe inspiring places/situations I have ever been in. Behind me the vast forests and deserts of Oregon stretched forever, to my left a short, very exposed, curving ridge led to the high point of Mount St Helens only 100 yards away. However it was looking north that was memorable. The crater itself has been blasted completely away. I imagined a full circle but this is not the case. The rim soon drops in to a shambles of rock and volcanic remains. At its centre some smoke made its way out of the rock bed but not as much as I had been led to believe. The far side of the crater had completely collapsed.

Beyond Mount St Helens itself a mountain stood proudly out of the largely flat landscape. The mountain in view was the snow capped Mount Rainier (14,410 ft), the highest mountain in Washington State. The isolation of these volcanos is probably my most vivid memory of the landscapes of the area (along with endless trees!). Behind me Mount Hood in Oregon stood equally proud. At this time of the year the snow added to the drama of the high summits. However, any time of the year would yield dramatic views.

After 15 minutes on the summit rim I headed down the same route, there really seemed no alternative. I passed a few people still climbing but they all looked competent. It was noticeable how better equipped and prepared these climbers were to those that maybe climb one of our highest mountains such as Snowdon. Having said that I was in the woods near the car park when this lad appeared and asked how long he thought the climb would take. I said it took well over 3 hours and he just looked at me and said ‘oh well I better run.’ To be fair he looked fit but I do wonder if he is still up there.

I did descend quickly and my round trip took 6 hours. An experience never to be forgotten.