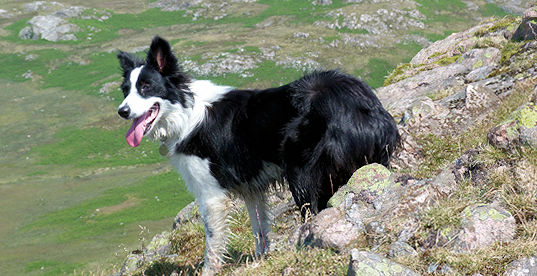 High on the flat summit ridge of Blencathra I was walking with Mist and was disappointed, and actually saddened, to see a young couple approaching the summit with their springer attached to a short lead.

Great that the dog was out, very sad to see him or her straining away for the freedom that is so natural in the instincts of most dogs. There were not even any sheep around which I guess would offer some type of explanation.

This was not a one off, more and more dogs are being walked on leads in the great outdoors when, in my opinion they should be racing around much more. I suspect there are two explanations, neither which gives much credit to the owner or society at large.

Mist is never on a lead which may be extremely unusual. Literally the only time that I put her on a lead is when a farmer specifically asks me to. The reality is that she is dreadful on a lead, pulling me in all directions, and much more likely to ‘alarm’ sheep or other livestock whilst straining away whilst on a lead. However it is fair enough if a farmer asks me to, it is his land and I am happy to oblige. More alarming for the sheep is that I may have to use my belt as a surrogate lead as I often do not carry one (I have also used a camera strap or a scarf!)
I will walk Mist off a lead through a full field of sheep, or alongside a road and, despite her intense interest, know that she will not leave my side and chase. This is because I have control of her (and therefore confidence in the situation) and I would argue this is key to walking in the countryside – Keep your dog under control but not neccessarily on a lead.
Once you have your dog under control  then let him or her enjoy themselves in the countryside. Being dogs most will naturally stick reasonably close to you but being off the lead makes them happier, happy to race, happy to investigate all the smells and happy to stretch their legs.
If a dog does not cover at least three times as much ground (Mist covers 5 or 6 as much)  as you do then the dog is not going to be as happy. Some breeds and advancing age may mean they stick closer to you but still allow them to sniff and explore on their own. It’s what they want.
Join a puppy or general behaviour club when you first get your hound, which will socialize the dog probably and also allows you as the owner to to be trained and gain the confidence needed to control your dog. Then take your pooch out in to the countryside and gradually train them in to what is and isn’t acceptable. I have not stopped Mist being intensely interested in sheep/cars/people but she does respond to commands, does not chase and knows how to behave. You may need to start off with them on a lead but gradually you will be able to let them off for longer and longer periods. You will know what is the best approach once you have the confidence to control your dog.
Mist simply loves the freedom and that happy smiling face is enough reward for the training that is initially needed!