Between Windermere and Coniston is an area of lowland tarns and woodland known as Beatrix Potter Country. It is where she lived and was happiest. Claiffe Heights is the high point and a challenge to find.

I am not sure why Wainwright insisted on Claife Heights being only an “Outlying Fell”. The fell is centrally located. The woods were apparently haunted by the Claife Cryer. I had also heard that the woods were impregnable, finding the summit of Claife Heights and that there was nowhere convenient to park. A lot of people will never explore the area as a result which is a shame. I must admit that for many years I was one of those guilty people. Near Sawrey and Hill Top being impossibly crowded. There was an element of truth to each statement (although I cannot vouch for the ghost) but this is still a thoroughly enjoyable walk albeit different in character to much of the Lakes.

Park near Far Sawrey and head directly north in to the countryside. This avoids the crowds visiting Hill Top House at Near Sawrey (the home of Beatrix Potter). The area near the tarns is particularly pleasant, whilst the summit of Claife Heights at High Blind How has a whopping O/S pillar and is only a few hundred yards from the path.

This is a tranquil part of the Lake District. It is easy to appreciate the pleasure that the area gave Beatrix Potter and the inspiration she drew from the walks. The land near the tarns (although they would have been smaller then) and the glorious views are inspirational today.

Start the walk at Far Sawrey. There is a pleasant little general shop, a good pub and easy access on to the fellside.

The path in the trees can be confusing. However it does head north for 1 1/2 miles, winding a little but generally straightforward to follow. The summit of Claiffe Heights is to your left at this point. A path leaves your path and bends west and south to the summit where you pass through a small col with higher lands to your left and right. 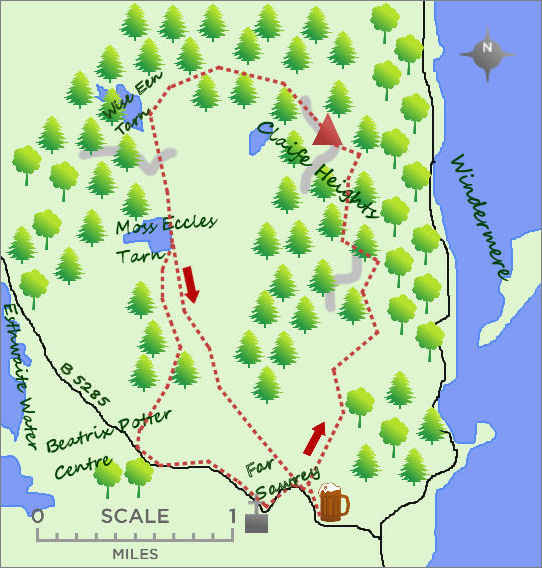 The paths through the woods in the mid section of the walk can be a little confusing but stick to the main one which is signposted. Underfoot is fine.

The Sawrey Hotel is a pleasant Lakes inn with a beer garden whilst the local shop serves a cup of tea and pastie.

Coniston to Ambleside via Tarn Hows

A walk in Grizedale Forest