The excellent walk of Sheffield Pike from Glenridding is often ignored by the thousands heading for Helvellyn. That is a mistake as it is an excellent mountain with spectacyular views over Helvellyn.

I have been guilty of ignoring Sheffield Pike, and its neighbour Glenridding Dodd, myself for far too many years as I headed up towards the higher mountains to the east. It is a typical example of a name drawing the yeye away from the reality. Glenridding’s local fell is Sheffield Pike (or Glenridding Dodd) and it would be expected that they would hve many visitors. They do not, certainly Sheffield Pike. This is clearly seen by the state of the path on the wide ridge leading to Sheffield Pike. Although muddy it is not the scar of the popular routes up other Lakeland fells.

The descent from Sheffield Pike starts off heading west until it reaches the remains of the old lead mining quarries. From here the wide track descends towards the youth hostel in Glenridding. The area around here offers a lovely contrast to the more rocky, steeper lands to the east overlooking Ullswater.

When planning a walk look for potentially hazards, particularly rivers. In this case Swart Beck near the quarries. In this case I was fortunate to find a bridge or I would certainly have been looking at some very wet feet! In particular look for streams that are on steep ground and in particular those where there is a v shape to the contours. The V on the map contours reflects the V on the ground! After any rain the gently stream can become much more foreful. 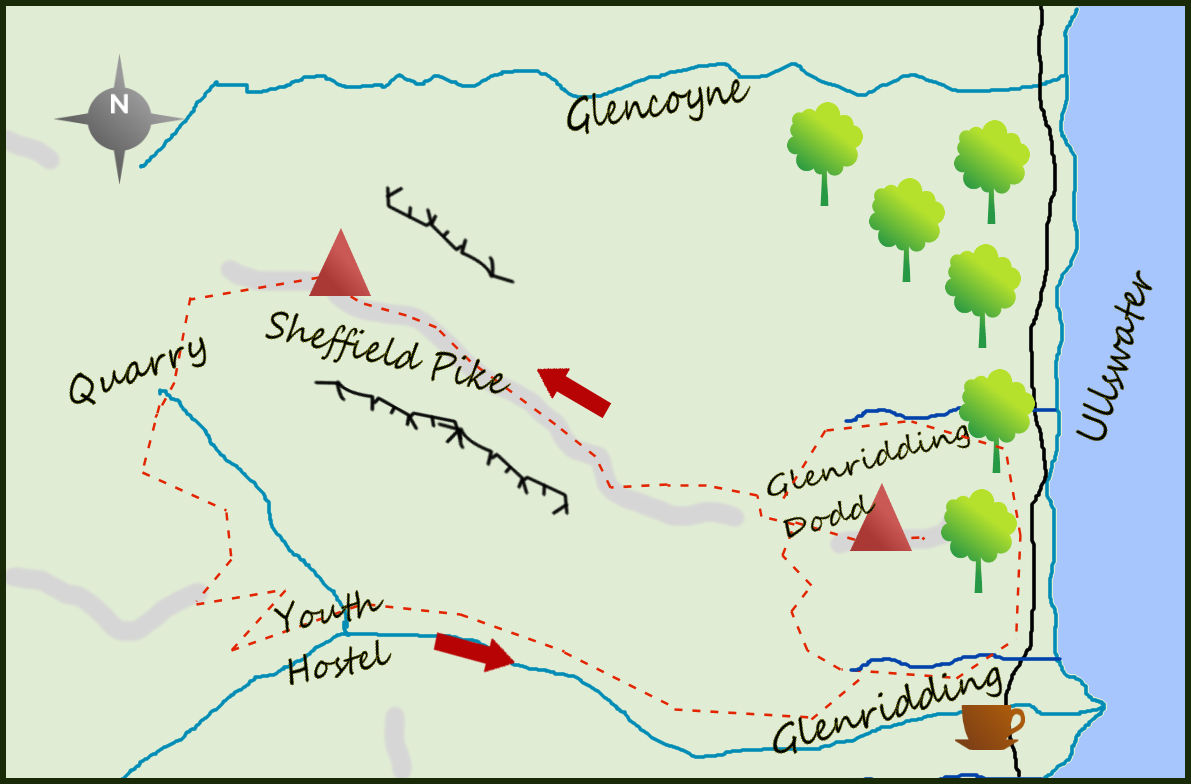 Glenridding. The large National Park car park. From the car park join the residential road heading initially to the youth hostel. Take to the mountain just over the cattle grid near past some houses. The path shown on the map is a little earlier on the road and has a no path sign on a gate.

Good stony paths except approaching the summit of Sheffield Pike where it can be wet through the peat.

Many pubs and cafes in Glenridding. The Travellers Arms is particularly tempting which is passed just before arriving back at the car park.

A Fistful of Dodds