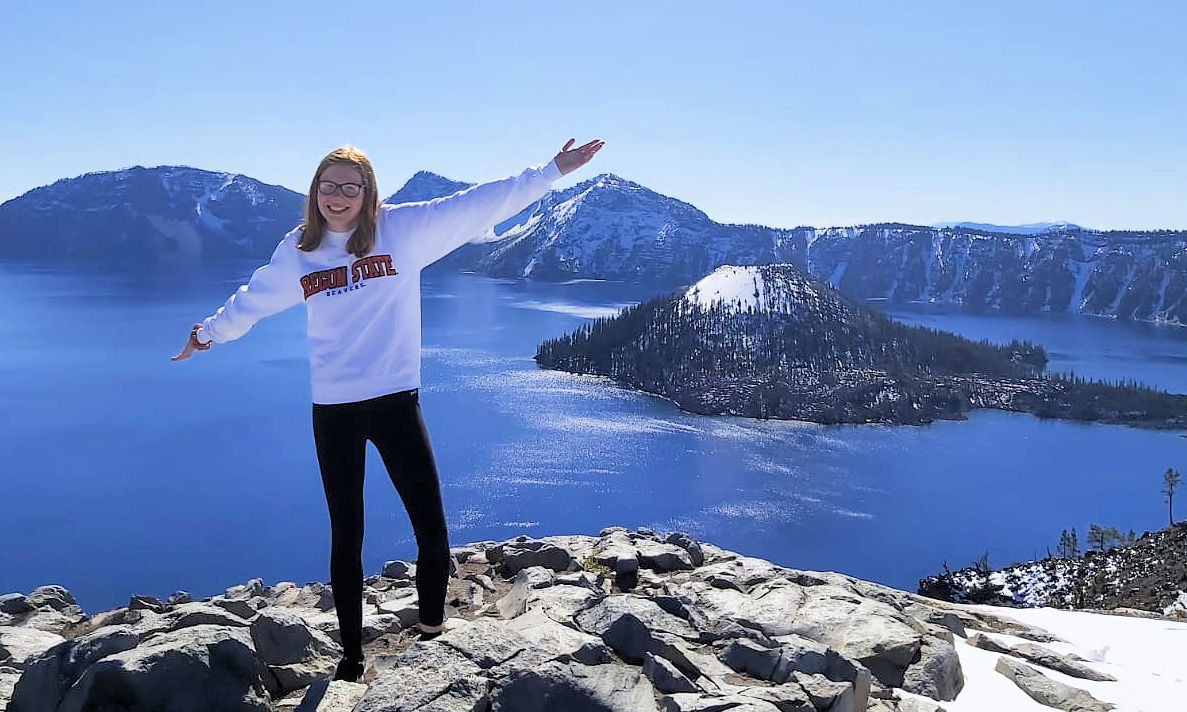 In 2019 Charlotte spent a term (semester) at Oregon State University. Oregon is renowned in the United States and beyond for its national parks and wonderful walking country. Whilst she ‘studied’ she  was able to travel through the state and took in some of the best hikes in Oregon.

These are her favourite 10 hikes in Oregon and places to visit:.

Crater Lake, the deepest lake in the US, is located in the south of Oregon in Crater Lake National Park, which cost us $25 per car. It was originally a volcano that erupted around 7700 years ago when the volcano collapsed into the empty magma chamber, leaving the Crater seen today. There is parking and toilets all around the 33 mile rim of the Crater. You can drive or cycle the whole way around or take one of the many walks.

We were given an information booklet and map upon entering the Park and optimistically went a 300m ‘serious hike’ up Garfield’s Creek starting from Rim Village, which even in the off season had toilets, a gift shop and café. While snow and mud made it a little slippery the climb was straightforward. In addition there are stunning view of Crater Lake throughout the walk. I’d also recommend taking your sunglasses, the glare from the water, sun and snow was blinding.

The Columbia River Gorge is a must-see, which you can reach by heading East out of Portland on the I-84. There are 77 waterfalls on the Oregon side alone, with multiple trails to view multiple waterfalls. Some are right next to a car park and some require a bit more of a hike. Some trails have been closed due to serious wildfires in the recent years but plenty more are still open.

The first waterfall you reach from Portland is Latourell Falls, with a 2.1 mile round hike from here to reach the Upper Falls. The best waterfall is Multnomah Falls, which falls in two tiers under the iconic Benson Bridge and also has a gift shop and places to eat and drink. Horsetail Falls is also easily accessible near the road and so named for it’s horsetail like shape

Silver Falls is located about 20 miles east of Salem. The Trail of Ten Falls in Silver Falls is the longest of the hikes in Oregon I did, a 7.9 miles long loop. If you don’t mind not ticking off all ten, you can shorten the walk considerably by cutting out North and Upper North Falls. The detour takes a lot of time.  Personally, I’d recommend doing all ten as these are two of the best waterfalls. North Falls in particular is impressive as the trail takes you behind the waterfall.

The trail has numerous ups and downs along the way but isn’t too taxing. Each waterfall is different, some fairly small and some huge, which you can walk behind. There are toilets and a small café/bar in the car park, although not many resources once you’re in the woods.

The Painted Hills are located in Eastern Oregon, near Bend in a desert-like area very different to the coasts, forests and waterfalls of Western Oregon. The John Day Fossil Beds National Monuments are split into 3 ‘units’ of which Painted Hills is the most famous for the red coloured layers of the hills. The short Painted Cove Trail takes you up close to the hills via boardwalks, or the 1.6 miles Crater Rim Trail gives panoramic views over the area.

Part of the appeal of the Painted Lakes is driving there. The pine forests of the coast give way to a bleak desert landscape much loved from old fashioned westerns. There is an adventure about the trip, passing small hicky villages where you really feel you do not want to be stuck for the night! Mitchell, the nearest village to the Painted Hill is one of these, we arrived on Halloween…say no more!

Everyone I met before leaving told me how beautiful the coastal hikes in Oregon were and now I’ve visited I know they’re definitely right. I’d recommend the Hobbit’s Trail and Heceta Head Lighthouse, which is located in between Florence and Yachats, both of which are South of the more well known Newport. You basically park on the side of the road in a small parking area, so be careful not to miss it.

The trail is so called due to the tunnel like pathway through the trees. A short way in, you can choose a short path directly to the (beautiful) beach pictured or take a longer walk to Heceta Head Lighthouse. This paths winds it’s way up until it opens out to some stunning views across the sea near the lighthouse. There is also a small (by hikes in Oregon standards!) secluded beach. You can’t go into the lighthouse but the views will keep you entertained. Going at sunset or sunrise is particularly stunning.

St Helens is now 8,365 feet high. However in 1985 it was over 1,000 feet higher. A giant eruption created by an earthquake blew the top off the mountain and created a dust cloud that covered much of the Northern Hemisphere. My dad climbed St Helens via the Monitor Ridge Route above the Climbers Bivouac (the Trailhead where there is a car park and toilets) . It is 4,500 feet of climbing, 10 mile round trip (the return is the same route as the climb) and took him exactly 6 hours. However the recommended time is longer.

You need a Park permit (May to Oct) to climb St Helens (obtained from recreation.gov for roughly $20. They offer 100 a day).

These are my dad’s words.

“The climb (non technical, no need for a rope but there is some limited scrambling)  is superb but I was fortunate to do it in good weather. It is split in to 3 distinct sections. The first 1,000 foot (2 1/2 miles) is through the trees on a decent path. The second is along the monitor ridge, a wide ridge full of boulders and loose rock making for awkward, at times slow, climbing. The final steep 1,000 feet to the crater rim is on a firm rock bed covered in ash and small pebbly stones. On breaking out on to the rim a short detour to the left took me to the highest point. The return is via the same way.  The route is signposted by discs on the trees and rocks.

There are plenty but in bad weather I can imagine some confusion in places, its not a place to get lost. I loved this hike in Washington State and have written a more detailed blog on the whole day. You can find it here.”

St Marys Peak is the first place I visited when I arrived in Oregon, mostly because it’s the closest to Corvallis, where Oregon State University is located. I went on a University organised trip on a very misty day, meaning walking through the forest was creepy and very cool, although there wasn’t much in the way of views at the top. However, there are beautiful views all the way across to the coast if you pick the right day.

There are multiple car parks located around, meaning the hike can pretty much be as long or short as you like. The 0.5 mile summit trail is the easiest, which starts from a car park with toilets at a very much worth it observation point. The Meadow Edge Trail through the trees lower down is the one I did and also lovely, starting from Mary’s Peak Campground.

The Mt Hood area offers some of the best hikes in Oregon and there’s definitely no shortage of walking. It’s also a popular skiing destination. Lists of hikes are easy to come by and we went for the fairly short 3.7 miles Mirror Lake Trail as the weather was freezing due to the altitude. We were staying in Government Camp, a small ski town very nearby with restaurants and hotels. The car park has toilets as well.

Mirror Lake is so called because it’s surface reflects Mt Hood, although a slight wind meant that didn’t happen when we were there. The total climb is 240m and we gained height slowly but surely and then completed the short loop around the lake before heading back.

Continuing North up the Oregon Coast to Yachats brings you to Thor’s Well, one of the highlights of my trip. Slightly treacherous and great fun to watch, Thor’s Well is a completely unrestricted sinkhole by the ocean. It fills from underneath until water explodes out the top, before completely draining away. This gives the impression of a bottomless hole that never fills, causing it to be described as the ‘drainpipe of the Pacific’ and even the ‘gateway to hell’.

My advice is to visit near high tide for the best views and also beware of sneaker waves, I happily watched one crash into the rock, realising too late as it came down and soaked me from head to foot. There is a lovely trail along the top of the cliffs to take in the views, or go down the steps to the beach for as close a look as you like…

In the south east area of the this hilly city lies the grandly named Mount Tabor. The name is Israeli in origin. The best way of hiking the hill is to follow the Blue Trail that winds its way gradually up to the summit mainly on dirt or paved paths.

Mount Tabor is the remains of one of Oregon’s iconic volcanoes (but less impressive than some of the others) and now houses a series of reservoirs. The reservoirs have caused much controversy over the past but now are simply sight seeing features rather than live.

Let us know if you have any other favourite hikes in Oregon.