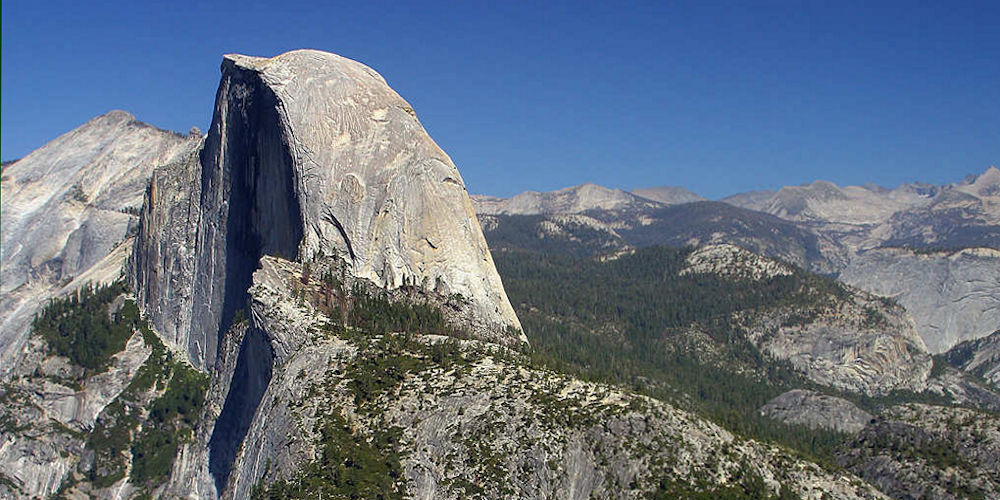 Yosemite is a superb walking area. There are a number of excellent ‘trails’ which are well signposted, clear to follow with wonderful views. Half Dome, El Capitan and shorter walks are all described.

We had an excellent day walking up to Nevada Falls and along the John Muir Trail in very hot conditions, Barry climbed Half Dome and JP trekked up El Capitan.

Hopefully these 3 separate walks (described below) and their accompanying photos will highlight some of the best walks and what can be achieved for the casual visitor. I have also included some Tips that may help you when you are planning your trip.

Planning your Visit to Yosemite

Here are some random thoughts about visiting Yosemite

We hopped on the valley (free) bus from Half Dome Village to the start of the walk at the Nature Centre at Happy Isles.  The signposting makes the walk obvious from here. The trail was packed for the first mile and a half along the Mist Trail to Vernal Falls, many heading for the first beauty spot of the route. Vernal Falls appeared dramatically just after some public conveniences and a steep climb took us up to the top of the falls and the wonderfully tranquil Vernal Lake. Maybe the steep slopes had seen off a number of fair weather walkers who just wanted to see the falls from its foot but the change to less people was very welcome.

The next leg was a steep climb in hot weather (part open/part in the trees). Very few people seemed to have made it here. The trail though was on a good path, straightforward to follow. The views when they did open up were magnificent. Nevada Falls were spectacular (nothing like them exist in Britain) and with the quickly gained height, the views down the valley were very impressive. The valley floor is U shaped (a legacy from glaciation) and filled with trees. Great domes of rock rose dramatically from the valley floor and with the deep blue sky made for a dramatic setting.

Near the top of the falls the path met the John Muir Trail near some more public conveniences! Left went to Half Dome (see Barry’s blog below), right was our route to the top of Nevada Falls. Despite various warnings about careful swimming  and not plunging over the waterfalls to your doom we made use of the river, cold though it was, for a quick period of cooling off. The clear water was irresistible and great fun to plunge in whilst keeping your feet firmly attached to the ground.

From the top of Nevada Falls the John Muir Trail meandered along the top of the cliffs with excellent views down the valley and up towards Half Dome. Again the trails are wide and easy to follow, superbly maintained, but still retaining a rugged feel. Where the trail divides (the uphill route leading to far off Glacier Point) the lower route starts to zig zag down hill. It meets the outbound route and the crowds at the foot of Vernal Fall. We had an easy walk back to the road head, ignored the bus, and walked 1/2 a mile back to Half Dome Village.

3. Walking up Half Dome

Barry took on the joys of Half Dome a few years earlier. Clearly he  did not have his family with him like myself or I would have ended up climbing this impressive peak.S ince he climbed the hill though it has become compulsory to get a permit to climb the fixed ropes. Apply well in advance.

Half Dome is a dominating feature of Yosemite and for many visitors it is the ultimate Yosemite hike. It is an unforgettable experience not just because of the magnificent sheer cliff face falling into the valley floor but also the 400 feet of steel cable which ascends an exposed 45 degree rock face at the back of Half Dome and which is the easiest way up.

There is however no need for climbing gear in summer conditions when the cables are in place which is generally between late May and early October.
It is a long day with 4800 feet of climbing and a 17 mile return trip. In summer it can also get fairly hot so I suggest you set off early.
In late August 2003 I visited Yosemite and stayed in the campsite near Curry Village. I got up early and found the start point near Happy Valley Nature Centre setting off at 7am on a beautiful sunny day. There were plenty of other people around setting off up the mountain.
I followed the John Muir trail on the way up. This stays in the trees and misses the falls but gives a steadier ascent. It is slightly longer and less popular than the Mist Trail which leads up by the waterfalls.

After an initial 2000 feet of ascent the route flattened and the John Muir trail rejoined the Mist trail. The Trail then carries on without gaining any height for nearly 3 miles as the route works it way to the back of the mountain and passed the Little Yosemite Valley Campground.

After this the route started ascending again through the forest reaching the Half Dome Trail junction about 2 miles from the summit. You are now at about 7000 feet and the excitement is about to begin!
Take the left fork up the Half Dome Trail. It continues ascending leading you out of the forest to the north east shoulder at 7600 feet. From here a rocky but relatively easy trail leads a further 650 feet up the mountain to the bottom of the twin cables. You will also see  wooden crossboards every few feet which provide footholds.

Fortunately it was early and thus not too crowded plus the weather was good. I picked up some gloves at the bottom to protect my hands and started up the twin cables finding the wooden cross boards useful to take the pressure off my arms. It was exposed and tiring on the arms but it is perfectly possible to get up as long as you have a good head for heights. I wouldn’t like to attempt it in bad weather or with thunderstorms about. n fact there are very few accidents on the steel rope ladders, two fatalities in 20 years.
I stayed at the top for about 30 minutes, it is a large flat rocky expanse with superb views. Although I nervously peered over the edge down the rock face I wouldn’t recommend this!

Going down the cables was easier than going up. However there were increasing amounts of people going up so I had to stop and let people go by and visa versa. From the bottom of the cables it was a fairly quick descent to the waterfalls. Here I stopped to take some pictures and cool down.

3,500 feet climb to a wonderful viewpoint

One of the best known and most iconic walks in Yosemite is the walk from the valley floor to Glacier Point. This is incorrectly called ‘Four mile Trail’ as it is in fact 4.6 miles from the start of the trail to Glacier Point. Apparently the reason for the discrepancy was route changes made many years ago. ‘Four Mile Trail’ can be combined with the Panorama trail to give a circular route and a visit to Nevada Fall, but this adds four miles and about two hours to the day so we descended by Four Mile Trail.

It was a glorious Saturday in June with the waterfalls full from melting snow when I completed this walk. The return journey took five hours. However, depending on the speed of your party, could take anything between four and seven hours. This does not allow for any time at Glacier Point. We spent an hour at Glacier Point to take in the fabulous views and stop at the snack bar. In short a full day should be allowed for this walk.

It is possible to drive from the valley floor to Glacier Point, a distance of some thirty miles as the road wends its way from the valley floor to the summit. This would normally take just over an hour but, at the weekends, can take closer to two hours because of the traffic (it may be quicker to walk sometimes!). Public Transport (buses) is intermittent. There were no buses running when we were there. If you are relying on a lift down, check out whether any buses are running before setting off.

We parked near Yosemite Lodge( which added nearly an extra mile each way to the walk), crossed Swinging Bridge and walked west up the road to the start of Four Mile Trail, which is clearly signposted from the road. An excellent path (see picture below) zig-zags up from the valley floor, gradually gaining height. The views over Yosemite Falls and down the valley improve as height is gained. Above, the terrain looks like an impossible mass of cliffs and trees, but the path finds a way through and takes you gradually east.

There were many people making their way up to Glacier Point. Some on the return journey after making an early start. One local woman told us that she completed the walk twice a week and said that, thirty years ago, she had spent the night on the summit of Half Dome. I suspect that would be more difficult today, with the requirement for a permit to make the ascent to Half Dome.

From time to time signs show miles completed and miles to Glacier Point to the nearest decimal point. About half way up the first view of Half Dome appears across the valley looking east. The path continues ascending and soon afterwards a short detour can be made to Union Point at a height of 6,314ft. From here there is a magnificent view west down the valley with El Capitan on the right. After a few more zig-zags the climbing relents and you are on the final section to Glacier Point.

On arrival the number of people dramatically increases, swelled by those who have driven up. Turn left for Glacier Point (150 metres) and right for the Snack Bar. We returned by the same route but a more challenging and longer descent (an additional four miles) would be to use the Panorama trail.