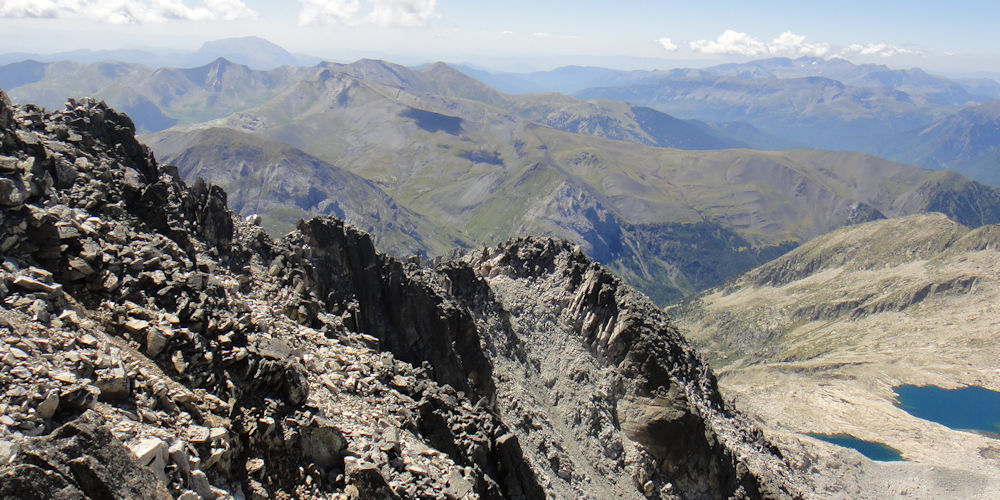 Barry has made two visits to the High Pyrenees climbing the 1st and 3rd highest mountains in the area. Starting with Perdido (the 3rd highest) then Pic d,Aneto (the highest) and finally the beautiful circuit of Pic Marbore

I climbed Perdido late in June 2010 as part of Jo Bradwell’s 65th birthday celebration trip to the Pyrenees. Perdido is the third highest Pyreneen peak and in good weather late in the season ie August/early September when there is little snow, it is probably one of the easier of the 3000 metre peaks in the High Pyrenees.

However we made it a hard day by walking up and down from the car park at the Pradera de Ordesa one day in late June with snow from 8000 feet. My recollection is that this took 10.5 hours for what was a relatively fit party.

About 20 of us set out from the car park at just over 4000 feet but not all expected to reach the summit. A good path took us up the valley floor for about 5 miles before a steep and rocky section (easy scrambling) took us off the valley floor and on to the plateau and the Goriz refuge. Some 3000 feet of climbing and about 7 miles from the car park to the refuge was completed in about 2.5 hours.

The route from the refuge then goes up steeply (but still a good path) towards the Lago Helado which is at nearly 10,000 feet. Towards the end of this section the snow and altitude started to take its toll and I slowed up finding it difficult to maintain speed as my steps kept breaking the crust of snow leaving me floundering in deep snow.

Five of us regrouped near the lake to view the summit slopes. Without crampons we were clearly under equipped. However there were footprints in the snow and with the snow now soft rather than icy we thought we would continue. Slowly we worked our way up the slopes stopping every 20 steps or so to recover breath and taking care as to fall off in places could have been serious. Eventually we reached the summit. Fantastic views into France but thunder and lightning were threatening so we started down.

The other 4 made faster progress than me down the steep snow slopes. We passed 2 more from our party on their way up who later reported that the lightening was crackling and dangerous when they reached the summit. They tried to discourage others from continuing up the mountain when they were descending

We retraced our steps just making the bus at 5.00pm and I struggled to walk up the stairs that evening! The High Pyrennes had taken its toll.

So Perdido is an excellent introduction to the Pyrenean 3000 metre peaks. I would make three recommendations:-

1 Take crampons unless you are assured that the peak is clear of snow (this would probably only be the case in August).
2 Unless you want a long day with nearly 7000 feet of climbing, book in at the Goriz refuge the night before.
3 Watch out for thunderstorms.

Having climbed Perdido, 5 of us went back to the Pyrenees late in August to climb Pic D Aneto, the highest mountain in the Pyrenees at 11,168 feet (3,404 metre). This time we were fully equipped with crampons and ice axes.

Monte Perdido is the 3rd highest peak in the Pyrenees at 3355m and was described by the famous Pyrenees pioneer Louis Ramond de Carbonnières as “the most beautiful limestone peak in Europe”.

We stayed in Benasque taking the bus up to the car park at La Besurta (cars not allowed as far as La Besurta in the summer season) arriving there at around 8.00am.

From there we walked up to the Renclusa refuge at around 7000 feet, 800 feet of ascent. This only took about 30 minutes so it is not necessary to stay in the refuge if climbing Pic D Aneto.

From there steep and at times bouldery slopes lead up the mountain to the ridge on the skyline. The path was at times difficult to follow but we continued up the steep slopes for about 2,500 feet finally traversing below the ridge to reach the gap in the ridge,named Portillon Superior, at about 9,500 feet. The sun shone out of a clear blue sky, the views were fantastic.

From there we traversed mixed snow and rocky/muddy ground until we reached where the glacier had not melted just below Pico de Corunes. It was time to put on the crampons, my first climb with crampons at age 54! They weren’t too difficult to use and I was glad of the security as we traversed the mountain where a slip would have left me sliding a fair way down the mixed ice and snow slopes. We then turned to go directly up the final snow slope toward the rocky summit. There were footmarks in the snow to follow and a number of people following the route.

We arrived at the col, took off the crampons and left the rucksacks at the col. The altitude was starting to take its toll and we were slowing up markedly, now at nearly 11,000 feet. We then made our way up the path to the final short rocky ridge which leads to the summit.

Some people were using ropes but although the ridge is exposed it is not difficult and relatively short, anyone who has been on the Cuillin ridge should be able to cope with this. At least in late August when there is no snow on the summit slopes.

We arrived at the summit with its cross and other paraphenelia still in unbroken sunshine.

A great climb but a long way down! On the way down I slipped off a snow slope into a glaciated pond much to the amusement of everyone. I also became very parched particularly on the final slopes down to the refuge which seemed endless. After a coke at the refuge and an orangeade at the bus stop I began to feel civilised again.

It took 9.5 hours up and down from the end of the road which meant we were back at the hotel for a bath and dinner.

A great and memorable day!

2 years later Jo, Graham and myself were once again in the Pyrenees, this time at Gavarnie.

The Cirque de Gavarnie is the best known feature in the Pyrenees and Gavarnie is the most visited village. It is a great amphitheatre of rock, snow and ice with a 1500 feet waterfall as the centrepiece. This area together with Spain’s Parque Nacional de Ordesa y Monte Perdido on the other side of the border have been included on the UNESCO World Heritage list recognising the spectacular nature of the landscape.

It was 4pm on a sunny afternoon in September and we planned to walk up to the hut, the Refuge de la Breche, stay the night and complete the route to the Pic du Marbore along the top of the Cirque the following day.

There are a number of ways to climb the 1200m (4,000feet) to the Refuge. We chose the route past the Hotellerie du Cirque which passes close to the Western base of the Cirque wall. It is featured as route 73 in the Cicerone guide to the Pyrenees. It is probably the most difficult route   To the Refuge as it is steep and a little exposed when it rises from the floor of the Cirque up rocky terraces to the Vallon de Sarradets which is also steep but not exposed.

We made good progress up the mountain and arrived at the hut soon after 7pm only to be told that it was fully booked. It was a Friday night in early September and clearly these huts need to be booked in advance particularly at weekends. Fortunately we were allowed to sleep on the floor in the dining room and given matresses to sleep on, but we were woken at around  4.30am as the early starters arrived for breakfast.

It wasn’t light until 7.30am and soon after that we were heading up to the Breche de Roland, a well known and historic gap in the frontier ridge (border between France and Spain) at 2800m. As it was September there was no snow and it was a straightforward and short ascent from the Refuge to the Breche de Roland. The Breche is 40m across with rock walls 100m high on both sides. Looking into Spain you see a desert of barren rock.

As the sun rose we turned left to traverse along the Spanish side of the Cirque below a rocky summit called Le Casque. The path hugs the mountain wall and after a few hundred yards a handrail protects a narrow section. We were now following route 74 in the Cicerone guide.

We continued until we reached the point where the path to the Casque du Marbore went off to the left (this mountain was 200m above us and could also be climbed on this trip by anyone feeling energetic). We continued on for a short distance then went up a cairned route which led us directly to the Tour du Marbore. There was a superb view overlooking the Cirque and it is well worth the short detour to take in this peak.

We continued along the top of the ridge for a few hundred yards with superb views over the Cirque du Gavarnie then dropped down to the Col de la Cascade. From here we made a short descent and started traversing round again on the Spanish side of the border towards the Cilindro du Marbore, which rose up as a rock wall about 3 kms ahead, it is 3325m.

About half way to the Cilindro and before starting the ascent, we headed north along a cairned route which after a short distance started to rise steeply and head slightly west of north. This is the last 300m of ascent to the Pic du Marbore. The Pic stands on the edge of the Cirque with views west towards Vignemale. Behind us was the Cilindro and behind that Perdido, only a few kilometres away.

The return trip took 7.5 hours. The route takes longer and is more complex than the Cicerone guide suggests. It had been a glorious day but just as we reached the Refuge a hailstorm started.

We stayed overnight in the Refuge, this time in the official accommodation and had some dinner with red wine.

The following morning dawned sunny and we took an easier route back to Gavernie. We followed the path from the Refuge towards the Col de Tentes over the Col des Sarradets and after a few hundred metres turned down the hillside following a cairned path. A drop of 1500 feet over scree but with a good path followed and we then crossed a stream to reach the path running from Gavarnie to the Port de Boucharo. We followed this to Gavarnie

Some Advice in the High Pyrenees

1 The easiest way of getting to the Refuge de la Breche is to drive up the road until you reach the Col de Tentes at 2200m. From here walk up to Port de Boucharo and then turn left to the Refuge. However the routes from Gavarnie give great views of the Cirque and the surrounding countryside

3. There was no snow in early September but I would have thought there would be snow around at least until July and ice axes and crampons would then be required