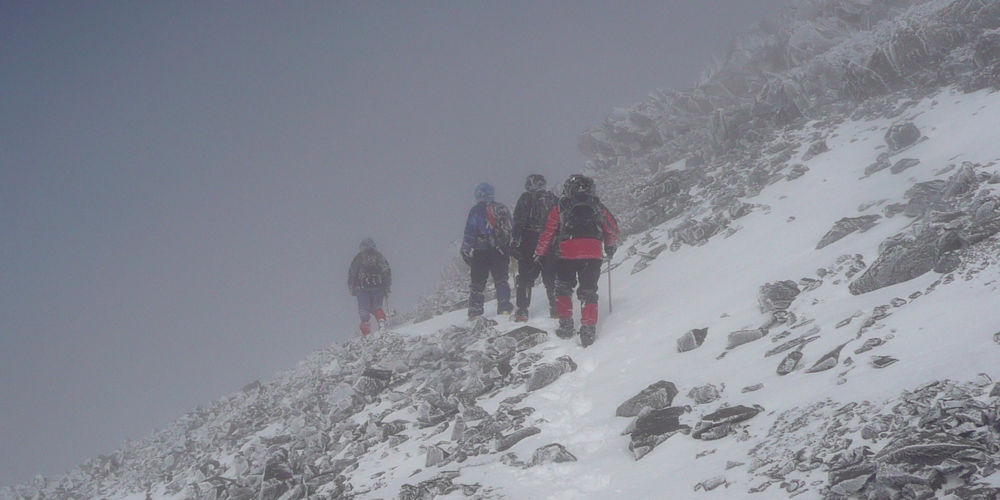 In November 2008 I took a week’s break to visit Morocco and a winter climb up Jebel Toubkal, the highest mountain in North Africa. It was a step into the unknown for me but it turned out to be a fantastic experience.

I joined a trek organized by Exodus Travel for a 4 day trek in to the Atlas Mountains and an ascent of Jebel Toubkal (4167 ms) the highest peak in the range. There was a couple of days in Marrakesh on either side.

A winter climb up Jebel Toubkal was exciting and demanded attention but not technically difficult. With the correct gear I would be comfortable not taking a guide with his main use on our trip for route finding (the maps not being of the quality of our O/S ones). Next time I would not. Summer would be straightforward and a guide not really necessary if a good map was available.

The reality is that climbing Jebel Toubkal is a minimum 2 day visit. 2,000 metres there and back from the road end is too much and would lose much of the enjoyment. Once up at the refuge it would certainly be worth another day or two walking in the area aside from Toubkal itself. The scenery is superb.

A week based in Marrakesh with 4 days in the mountains sounds right. I would tell anyone competent in the mountains that they do not need a guide but those who are less confident/experienced may find the Morroccan ‘way of life’ requires the comfort of one.

The road from Marrakesh ends after a 1 ½ hour drive. Imlil is a small village with a couple of traders shops and a café where the road ends. A steep climb for ½ an hour took us to a gite where we stayed for the night across the valley from the spectacular hill village of Ahmed. The gite was extremely cold and basic with an ineffectual fire which produced little heat but much smoke. I slept in room with Peter and Stevie.

We set off about 8 the following day in good weather for the walk up to the Refuge which really is no more than a 3 hour walk but took us over 4. The track crossed the flat valley floor before climbing steadily up the valley side. The track was good and the walking very pleasant bearing in mind the mules had our packs! A noticeable stop off point was the ‘shrine’ which infidels are not allowed near but a man was selling green tea and coke so we stopped for ½ an hour.

From the shrine another steep section brought us to the main valley and a dramatic change in weather. The wind got up, temperature dropped and ice and patches of snow appeared on the track. The views were still spectacular of Jebel Toubkal and the surrounding peaks. Certainly more Alpine than British. Eventually we reached the Refuge which was perched under the south cwm route up Jebel Toubkal. It was noticeable how poor Stevie performed.

The Refuge and the ‘wasted’ day

The refuge was not so bad, just permanently cold with yet again an ineffective heating device in the main room. Therefore for the many hours we were always wrapped up in full outdoor gear and even then your core always seemed cold – maybe that is what always happens when in the high. Chocolate and drinks could be bought and we had meals which were ok if a little limited. The real problem soon became obvious – boredom! We played cards a lot, read a lot but basically found ourselves waiting around for something to happen. Nothing ever did, particularly when the party from Adventure Travel left on the following morning.

We had 2 full days planned for walking but the first of those was a right off. The weather was v poor and there was no way we were going to get far from the refuge. And certainly no attempt on the summit would have been possible. The wind was the problem, whipping up a snow storm and really too strong. The boys went for a walk in the afternoon which really was more of an attempt to relieve the boredom and prove to the guides we were serious about climbing than achieving anything useful.

It was noticeable at this time that the chief guide (named Ya Ya) and the girls were not particularly enthusiastic about the whole trip and in particular going up the hill.

A slow start to the day with us not leaving the refuge till 8.30. The weather was better than the day before but still windy and snow had fallen the night before making the route slow. We would be the only people attempting the summit that day as no-one else was staying in the refuge. It was clear immediately that not many of us were really determined and believed that we could get up. I even discussed with Pete the possibility of going alone but we were unsure of the route.

The route goes steeply up from the Refuge in to the south cwm. In summer this is meant to be a difficult scree slope, for us this was more about breaking trail through snow. Hussain, the mountain guide led the way with Ya Ya sweeping up. Within ½ an hour Ya Ya had turned back with Stevie and we never saw him again. A shocking bit of guiding which left us very exposed with a single guide.

After the initial steep climb in to the cwm the track flattens a little but we were faced with deeper snow. Hussain asked me to lead for some points which was very hard work, with snow up to my thighs at one point. Without really knowing the route it was hard to gauge where we were on the hill (there was no views – just cloud).

There was also trouble with Steph who was climbing very slowly and was clearly affected by the altitude. Chris was doing a staunch job but she was being sick and was totally weary. She kept shouting at me, claiming I was going too quickly and was too single minded about getting to the summit (surely not!). Things carried on in this vain for a couple of hours with us expecting to be turned around at any time by Hussain but all he kept saying was that we were climbing slowly but he kept going.

Eventually the terrain improved as we approached the ridge with the ground wind blown and therefore easier to walk on. Despite some wind there was also a perceptive lightening of the sky and patches of cold blue appeared. Hussain suddenly announced that at our pace we were 40 minutes from the summit and then I knew we would make it. Suddenly the walk became immensely enjoyable as we headed along an exposed ridge with a serious drop to the south. The ground was hard frozen and there was a little bit of light scrambling – the summit would not have been attainable without crampons. I took Steph’s ice axe and she carried on with walking poles.

The Summit of Jebel Toubkal

The summit was some type of wig wam frame in a built up flattened area perched on the cliff edge. It had taken 5 ½ hours. We stayed for 20 minutes as the views were distinctly limited and the wind was getting up, most water was frozen as well (platypus useless in the cold!). The guide seemed quite happy to have got up and to be fair he was always in control. He oozed confidence that he knew what he was doing.Experience makes the difference.

He said that he was taking some French up to ski down which looked interesting. Lisa had a crap on the summit! We reversed the route on the descent and it took us just over 2 hours. Both Chris and Patrick suffered through exhaustion and fell a lot in the snow but really the descent was fine and easy in the snow. I did get a headache on the way down but whether this was through altitude or dehydration I do not know. It went away that night.

Overall great relief to have got up but I do have big reservations about travelling in a group of unknown expertise which could affect the chances of getting up. Jebel Toubkal and the surrounding hills would be good fun in the summer in good weather – no guide would be needed – but it is a little different in the snow. There is no doubt that weather and ground conditions were much worse than I thought – more snow and colder!

We descended to the gite without incident the next day. The weather was ok and views initially good. The day we descended was however a big festival where each Moroccan family slaughtered an animal and hung it in the home for the night – apparently a legacy from when Abraham was asked by God to kill his own son which he was prepared to do until God showed leniency and at the last moment offered him a sheep. This is now wildly celebrated. We saw a slaughter from the distance at the shrine and when we took a walk through the hill village of Ahmed (in the pouring rain) there was plenty of evidence of slaughter and also people running around carrying goat skins.

Marrakesh is really no more than a 2 day visit. The Souks off the Old Square are interesting enough and the old city walls are a spectacular colour but really the begging does get a little wearisome after a while. The old square is ok to eat in off the markets and the food is ok if a little bland. No alcohol is available at all in the old town and only in nice hotels or the Chesterfield outside! Apparently the museum is worth a visit but I never got there. Fez is meant to be what Marrakesh was 10 years ago and certainly the whole county is a very different experience than Europe. The people were all friendly and helpful but there is a lot of begging. The mountain though is what counted on this trip.

Pete the Aussie – typical of his ilk and prepared to give it a go. Up for a beer.

Steph and Chris – Orthodontists. Good company but Steph struggled on the mountain with altitude sickness.

Why not contact El Houssain from Imlil Trek to guide you up Toubkal .