Angletarn Pikes overlook one of the most beautiful tarns in the Lake District, Angle Tarn. Surrounded on all sides by craggy mountains the tarn is a perfect place to loiter and enjoy.

1857′. I have included a considerable number of fells around Ullswater for a reason. Almost without fail they offer some of the most interesting walks in the Lake District. A walk that includes Angletarn Pikes has always been popular.Principally this is due to the magnificent tarn which sits between themselves and Brock Crags. Angle Tarn is not smooth sided, deep and cold as many Lakeland Tarns are but enjoys a wide, shallow basin surrounded by low craggy hills and punctured by inlets and grassy knolls. It has been scooped out gently rather than scoured deeply. No doubt it will silt up eventually.

The Pikes themselves are often ignored by those intent on seeking the pleasures of the tarn or the higher fells beyond. However it is a pleasant scramble to the twin summits. The highest point is on the northern outcrop albeit with the smaller cairn. Hartsop is a pleasant starting point. I headed first towards Ullswater and Boredale Hause, which lies between Place Fell and Angletarn Crags, and returned via Hayeswater. The walk is along an obvious rough path, steep at times, but very rewarding.

The track up from Glenridding is part of the Coast to Coast. It eventually emerges on to the High Street ridge and the spectacular summit of Kidsty Pike before plunging in to Haweswater. It is one of the best days on the crossing.

Add Brock Crags to the walk for the best views over upper Ullswater.

Angletarn Pikes and the descent are all off the main path. Sheep tracks lead the walker astray so just follow your instinct on to the crags themselves. A bit of a scramble can be a lot of fun. On the descent a sheep track does lead to Brock Crags but from here follow the wall south on your descent to a path just above a second wall. 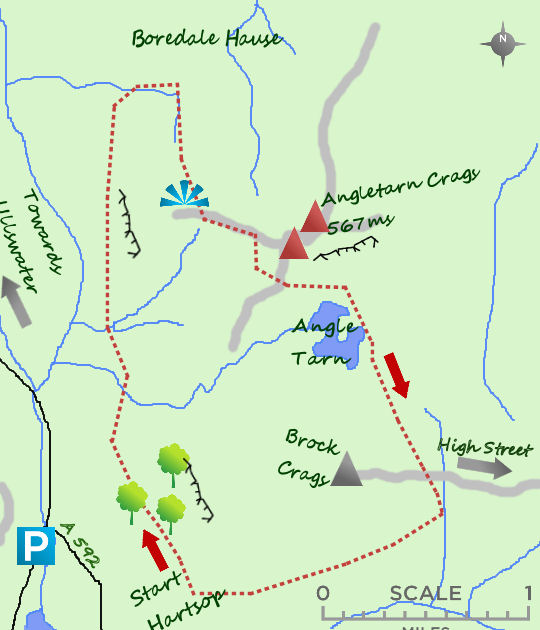 There is a small car park at the far end of Hartsop. Either route up is as good as the other.

The tracks are clear and unmissable except for the clamber/scramble over the twin summit areas. Pick your own route here.

There is nothing at Hartsop but the Brothers Water Inn is good as is the Kirkstone Inn. There is a greater choice in Patterdale & Glenridding.

The Beauty of Ullswater