I have attempted to climb Baugh Fell from 3 different directions; I failed to gain the summit on the direct approach from Sedbergh and found the quick up and down from Dent a little monotonous so the other day I took some outside advice and started a long day from Rowleth Bridge. Baugh Fell is a massif expanse of upland with no obvious routes of ascent; as a result it is only visited by the lonely fanatic and sadistic instructors on Duke of Edinburgh training.

A little harsh as the route from Rawthey Bridge has some interest once the farms have been left behind, mainly in the form of the attractive beck which is followed until it splits in to a V on the 450 meter contour. The summit area is vast but the views particularly over the Howgills and generally to the west are outstanding. Once I passed the lonely (but well constructed) shelter on the edge of the plateau I thoroughly enjoyed striding over the plateau and the long but easy descent back to the car. I have certainly revised my previous view of Baugh Fell.

Baugh Fell is one of the Dales 30 Mountains

Make sure you tick the highest point which lies 1 kilometer east of the trig point. My brother did not so must return!

I cannot think of a walk on this website that is more of a test of navigation skills. In particularly the use of a compass. The summit area is vast without obvious features (one useful fence) and the approaches from the north and west equally difficult. Do not venture up without the ability to take and more important follow a bearing. 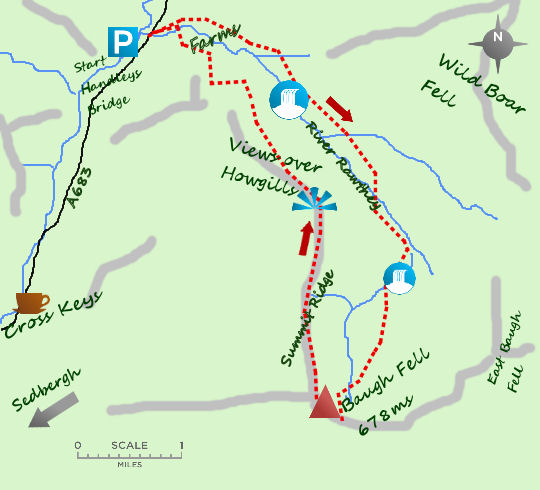 Rawthey Bridge on the A683 has a good parking. From here cross the bridge and aim up the side road before taking to the fields at the sharp corner.

Tracks are at best intermittent on this walk. There are some signs to get through the initial farmland but then the river provides the route. Underfoot can be wet but I found it ok if tussocky.

The Cross Keys Inn is 1 a mile to the the south of Rathey Bridge and serves good food and non alcoholic drinks.