Head from Seathwaite to Great Gable via Styhead Tarn. At the tarn cut under the steep, rocky south slopes, past Napes Needle and a steep climb to the summit. The return is in direct contrast, easy grassy slopes with amazing views.

Great Gable is a ‘climbers’ mountain, possibly the best and probably the most famous in the Lake District. For walkers attempting Great Gable this means one thing. The route up is going to be steep and in the case of Great Gable unremittingly so. It is possible to avoid the worst by starting at Honister Pass but this is a bit of a cheat and still involves a rocky pull from Windy Gap. The other 2 main routes of ascent are hard work, whether the start point is Wasdale or Borrowdale.

However there is one route which simply must be taken by anyone who wants to fully appreciate this magnificent mountain. This is the Climbers Traverse and the Needles Ridge. The traverse crosses the southern slopes of Gable on a visible but ‘loose’ path with stupendous views down Wasdale and up over the Napes and the Sphinx’s Head. I prefer then ‘threading the needle’ ie: taking the direct route on an initial thin but then non-existent track below Napes Needle. This is Grade 3 scrambling but can be avoided by following the traverse over loose scree and some grade 2 scrambling all the way round to the col under Kirkfell. Whichever route you decide on you will be in the most spectacular rock scenery within the Lake District.

Follow the route north over Green Gable and Base Brown before dropping steeply to Seathwaite Farm and a well earned pint.

After following the Climber Traverse it is tricky to find the walkers route via Napes Needle and the rocky buttress further on known as the White Napes. Where the traverse turn from west to north a path heads steeply uphill. It is rough and sometimes two steps up one step down. Alternatively follow the main traverse all the way to the col between Kirk Fell and Great Gable and head east to the summit on a much better and easier path. 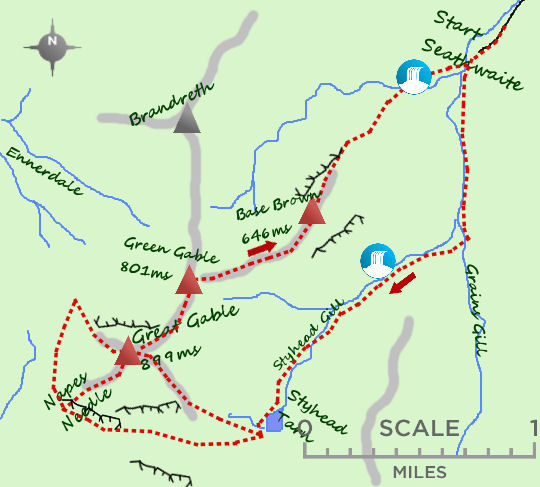 The road to Seathwaite farm has plenty of roadside parking even on the busiest of days.

Rough tracks on all but the Base Brown Ridge. Hard on the feet but exhilarating even if you take on the Napes scramble.

There is a small tea shop at Seathwaite farm, otherwise the Yew Tree is a mile down the road at Seatoller.