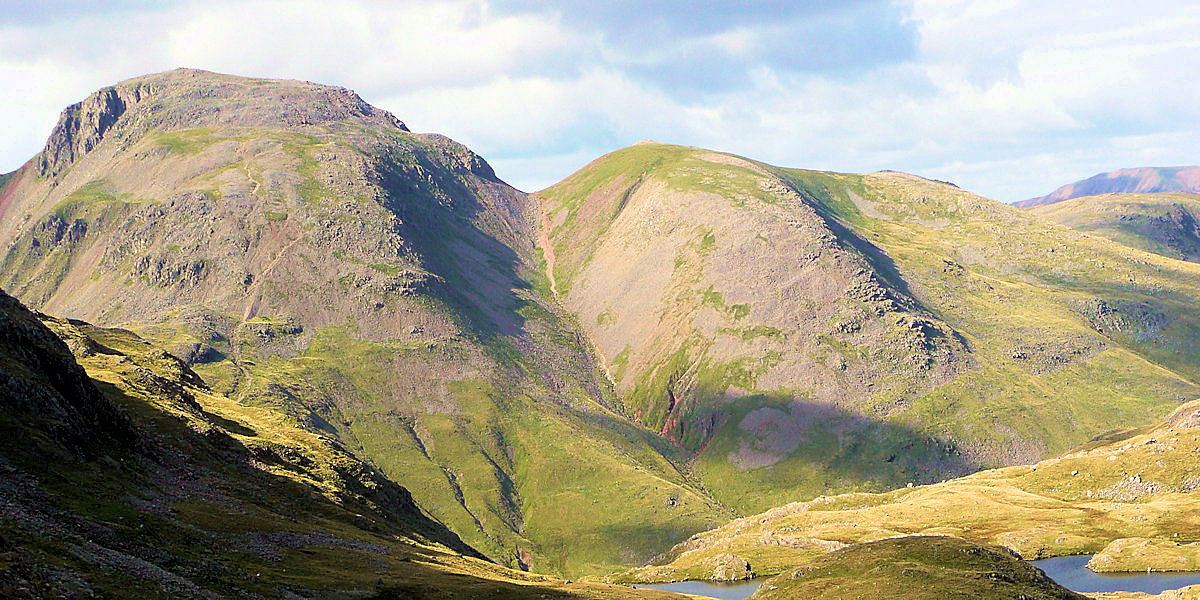 The climb of Scafell Pike from Seathwaite via the Corridor Route is the best way to arrive at the highest place in England. In addition the walk includes two of the best tarns in the Lake District, Styhead and Sprinkling.

The highest point in England is Scafell Pike (3,210 feet/978 ms). It is most often reached via the Corridor Route from Styhead Tarn and Seathwaite. The most popular alternative climb is from Wasdale Head. However this is a strenuous pull which generally lacks interest. It is also used on the National 3 Peaks as the quickest ascent. The fact it is then done in darkness really sums it up. Stick to the walk from Seathwaite!

The Corridor Route winds its way through the most rugged yet spectacular rock scenery in England and is correctly described as a classic. The deep gash of Piers Gill and the views down Wasdale maybe highlights but there is drama and delight from the start. The path is rough however so stopping is more frequent in order to appreciate the ever changing views.

The summit plateau is an uninspiring boulder field. The highest point is not a good viewing spot either. There is some interest for geologists (the boulders on the summit being literally blown out of the ground in a volcanic eruption) but just relief for the walker. The return route via Great End and Sprinkling Tarn is initially very rough but improves as Borrowdale opens up on the descent of Grains Gill.

Take in Lingmell, the extra 200 feet of climbing is worth it for the wonderful 360 degree views. Wasdale and Borrowdale are most impressive.

Scafell Pike from Seathwaite is definitely a challenge and requires good compass work in cloudy conditions. The summit area and return via Broad Crag is full of rock and boulders with no definable path. There are plenty of cairns which help but most important is to take and follow the correct bearing. 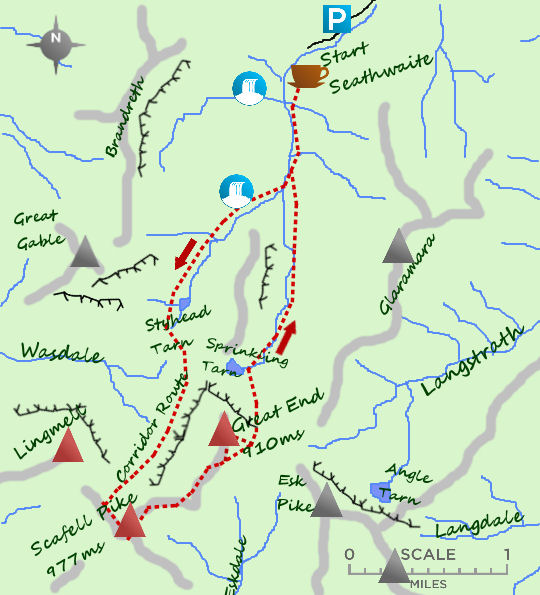 The road near Seathwaite is always packed with cars parking at he side of the road. That is fine.

Well worn paths lead to and from Safell Pike. The summit plateau is bouldery and hard on the soles!

The Yew Tree at Seatoller and the the Langstrath Inn at Stonethwaite are fine for a refreshing drink, each still retaining some Lakeland charm