The Head of Haweswater walk circles the valley head,starting with a rocky climb past the idyllic Small Water. The return heads south east over the lesser visited peaks of Harter Fell, Branstree and Selside Pike.

Haweswater is a good base for a climb of the eastern fells. The walking tends to be shorter than any approach from Ullswater. It is also quieter. However be aware that the Head of Haweswater walk does not venture on to the main High Street ridge but explores the lesser known fells to the south and east. From Nan Bield pass the route does join the Kentmere Round for the brief but steep climb of Harter Fell.

However it is the two summits of Branstree and Selside Pike which make the walk memorable. The rough paths suddenly become grassy pathways, rocky summits become smooth rounded summits. It is a great contrast to the previous climb of Harter Fell. In addition there is a small tarn just beyond Branstree which you can compare (badly in this case) with the delectable Small Water. One is surrounded by dramatic rocky slopes, the other is a tranquil body of water set in a grassy hollow. As the walk continues the views become more focused on the rolling fells of the eastern lakes, again a contrast to earlier but no less interesting.

The views north towards High Street and beyond are exceptional. It is worth stopping on the steep slopes of Harter Fell for your picnic.

Navigation Tips on the Head of Haweswater

On the descent back to Haweswater from Selside Pike head just north of west to Hopgill Beck and the sheepfold just over the beck. A steep but faint path descends from here. However it soon arrives at the wall next to Hopgill Beck. Hop over and it is a short walk back to the car. 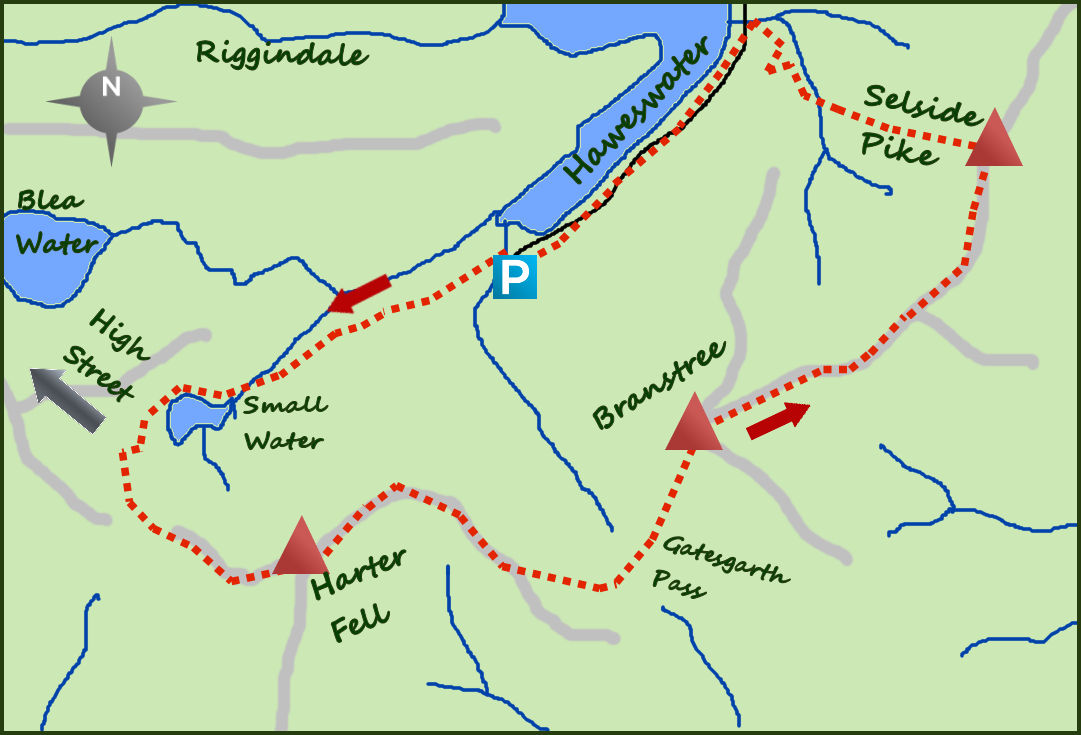 There is free parking at the head of Haweswater, not much on a popular summer's day when the traffic backs up alongside the reservoir.

Contrasting. The first half of the walk has rocky well used paths but from Gatesgarth Pass the paths are less obvious but on grass and easier to walk on. From rock to grass.

There is nothing near the parking. The Brasserie 37, a hotel half way along the lake is good for dining but best head on to Brampton Grange.