Scafell and Scafell Pike from Wasdale involves a steep and relentless climb from the valley and a tricky crossing between the two (very separate) mountains. It is rightly a classic. The descent from Scafell is lovely.

The circuit of Scafell Pike and Scafell from Wasdale is a well deserved classic. This is particularly so if you climb Lingmell first and do not take the badly eroded path directly to Scafell Pike. Part of the erosion is caused by the 1,000s taking up the National 3 Peaks Challenge, and therefore the quickest climb. From Lingmell it is a short drop to the col between it and Scafell Pike. The Pike is soon reached and you can then take pleasure in being at the highest place in England.

The walk improves dramatically at the summit of Scafell Pike. Initially cross the rocky summit area to the col of Mickledore, a place of history and legend. It also requires sensible decision making.

There are three options at this point. My preferred option is Lords Rake. A 200 foot drop to the north side finds an opening in to a shattered rake of loose rock which climbs steeply to a point just before the ‘unstable’ boulder (chockstone). The steep grassy slopes lead to the summit. The second option is Broad Stand. I climbed Broad Stand (the direct and quickest route) when I was young. However the twelve foot slab scares me now and I would avoid it. It can be lethal in the wet or on a descent. The third option is a 500 foot descent on the southern side of Scafell to Foxes Tarn. It is not particularly appealing, a bit dull but safe.

The descent from Scafell is safe and pleasant with great views over the Wasdale valley.

Take the track up the shoulder of Lingmell rather than the more obvious one up Lingmell Gill.

Navigation Tips on Scafell from Wasdale

The summit of Scafell Pike is a confusing place in bad weather. There is steep land on all sides and the descent to Mickledore from the summit needs care. The bearing is 240 degrees but take a compass and check yourself. On arrival at Mickledore go left towards 3 Tarns or right to a gap/ladder in the rock face which is Lords Rake. 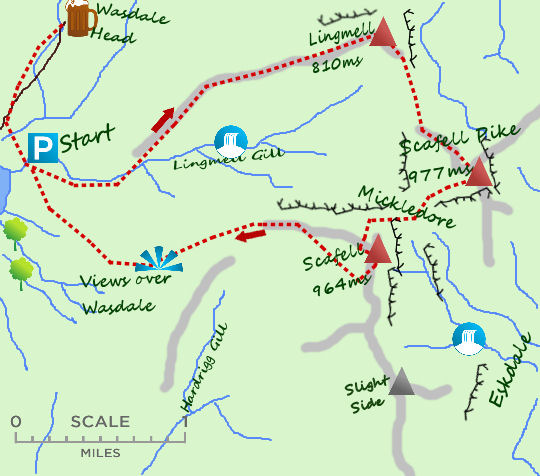 Wasdale Head is an iconic place to enjoy good food (restaurant or bar food) or just a cup of tea.

Pillar and the Mosedale Horseshoe

Scafell from the South