Home > Walks > The Other Borrowdale

The ‘Other’ Borrowdale is situated near Tebay on the M6 (sounds great!). However the walk goes through a unspoilt valley and returns via the rolling countryside on its north side. Amongst other things there are interesting views of the M6!

There is a sizeable clutch of beautiful unspoilt land to the north of Kendal. The best is sandwiched between the M6 near Tebay and the A6. It is dominated by the ‘other’ Borrowdale which cuts a deep (but wide) swathe through rolling fells that are more reminiscent of the neighbouring Howgills than the Lakes to the west. I have looked at these fells year in year out as I sped up the M6 but never bothered to stop and investigate them more closely.

On my first visit in 2010 I explored the valley without really knowing what to expect. I walked up the valley from the east expecting to make a long loop to the south. However on arrival at the stepping stones near the A6 I changed plans and headed up to the rolling hills to the north which cling closely to the Borrowdale Valley. It was good choice. The walking on the ridge is excellent (there is a path) and the views interesting with the M6 to be seen but surprisingly not heard. Try it.

A political one. Please extend the boundaries of the National Park to include this lovely area, it is well deserving and in review at the present time. It has happened.

Navigation Tips in the Other Borrowdale

There are no real paths on the grassy ridge to the north of the valley. Therefore pick your way from rounded lump to rounded lump. If in cloud take a bearing between them. 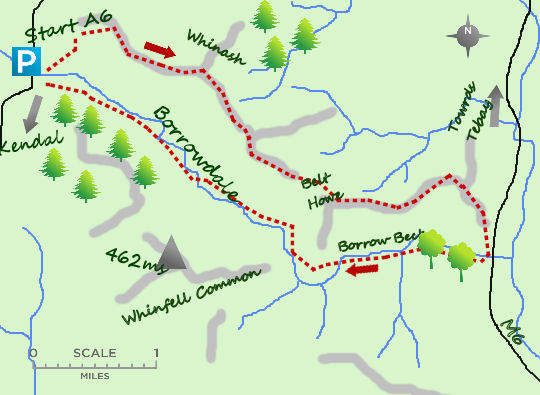 Just south of the bridge on the A6, 2 miles south of Tebay, there is a side road with parking 100 yards in.

Easy bridleway on the valley floor and up to the ridge where a path winds its way to all but the final descent to the start point.

The Cross Keys in Tebay is two miles away from the start point and a surprisingly good pub. Tebay is alright!