Wet Sleddale is hidden away in a quiet corner of the Lake District near Shap. This walk circles the reservoir and ends above it with good views across the valley and beyond.

It was a lovely summer’s evening that on impulse I pulled off the M6 and decided on a walk in Wet Sleddale. The reservoir was to be the focus but to be honest a more compelling reason was that I had never previously visited the valley. Maybe the name had put me off in the past, it is really not very inspiring. One look at the map suggested there was little more than a reservoir in the valley. However it did look as though there was a good walk around the reservoir and that it would be quiet and peaceful.

This turned out to be the case. I thought it was a delightful circuit with plenty of interest. In particular for bird watchers and wildlife experts will enjoy the lack of people and subsequent emergence of other forms of life. In addition Sleddale House has a long history. It may have existed for over eight hundred years when the monks from Shap Abbey owned and farmed the area. It is now a private residence. The owners must wish to really escape the outside world as there is no access. However the reservoir (which feeds Manchester) sparkled in the low sun light and made for some continuously impressive yet changing views. After climbing to the (intermittent) bridleway to the north there were some surprisingly good views over the Pennine fells. In addition the village of Shap and the twin transport lines of road and rail can also be seen.

I took the higher bridleway to the north to avoid the farm houses and absorb the peace of the area, I think it was the correct decision. However the path does fizzle out as it heads east.

Sometimes a walk in a quiet area can feel a little like trespassing. It isn’t. So do not worry. However be careful in following the path which in quiet areas are not obvious on the ground. My tip is look for the stiles in walls and fences. 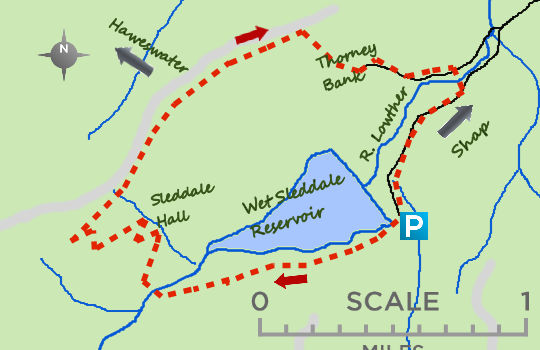 There is a car park to the south east of the dam. I would head along the south shoreline in a clockwise direction.

Can be a little wet near the reservoir and above Thorney Bank the path is not clear as it is rarely used.

The nearest place to eat and have a drink is Shap, only 2 miles distant.

A walk round Haweswater