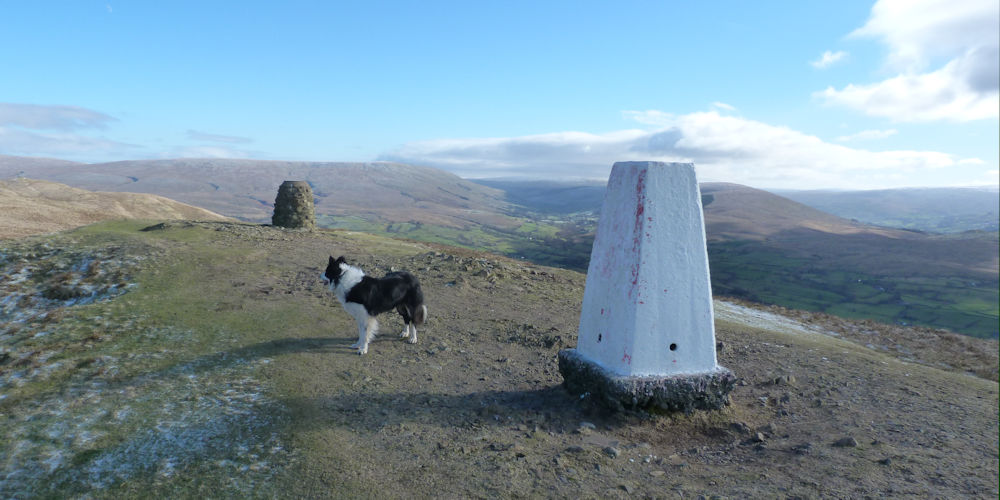 The Dales High Way does what it says on the tin ie: provides a high level route through the Dales. The mountains just roll off the tongue. Ingleborough, Whernside , the Howgills, Ilkley Moor and Sharp Haw are the summits but for much of the rest of the route the path keeps to high ground.

It is also A Dales High Way for a reason as there are variations on the route that can include more high land, more choices and even more fun. Yes there is an official route (there are even a few signposts) but because A Dales High Way is for the more experienced walker there will always be a tendency to create your own route. Pen y Ghent can be added to ensure all 3 Peaks are climbed. A stop in Ravenstonedale could lead to an excellent day walk on Wild Boar Fell whilst Ilkley Moor could be explored further.

What also makes the walk so attractive (and practical) is its continual proximity to the spectacular Settle to Carlisle railway. As well as ensuring a quick return at the end of the walk the presence of the line means A Dales High Way can be easily split in to sections (at the end of most days a station is nearby). It also provides options for non walkers.

The Most Popular Itinerary

From Saltaire (the official start) the walk takes to the hills immediately with a climb over Ilkley Moor and back down in to Ilkley town. From the town the route skirts the moors at Addingham Fell, drops in to the town of that name before a final climb over the rolling hills that make up Skipton Moor. The views are excellent herewith the Dales laid out in front of you and the market town of Skipton below.

Flasby Fell starts the day and is an easy fell set just north of Skipton. From here you enter the real Dales. A low land section follows passing through the villages of Flasby, Hetton (lunch!!) and then on to Malham. There will be a major temptation to stay in Malham but the official route carries on over the limestone pavements of the Settle Loop before ending with a steep descent in to Settle.

Initially following the River Ribble to pretty Stainforth the route then climbs over some limestone pavements to the small hamlet of Feizor where it would do no harm to sample the sandwiches in surely the best cafe in the Dales?? Ingleborough in now looming and the ascent picks its way through some rough lands on to the steep slopes of the best of the 3 Peaks. After the flat summit the path drops steeply towards Chapel-le-Dale or Ribblehead for your night stop

The 600 metres up hill refers to the official route but I would be tempted to take the climb (similar distance) that peaks out over Whernside (the highest point in Yorkshire). This high level option does miss a closer inspection of the magnificent Ribblehead viaduct but I believe that climbing Whernside (particularly if the weather is good) is preferable. Both routes then drop in to Dentdale near the village of Dent. From here follow the River Dee to the ‘Book Town’ of Sedbergh.

The Howgills are often described as a glorious High Way of walking and I would not argue. Once up the steep slopes above Sedbergh the walking is so easy the miles just fly by. From Winder the ridge undulates over Calders, the Calf and Hazelgill Knott before dropping steeply in to the Lune Valley and Newbiggin of that name. Kirkby Stephen is only a few miles away and has plenty of accommodation if it is a struggle in the valley.

In contrast to the previous 3 days the very high land is left behind but the land is full of character, variety and more than anything a feel of remoteness. Limestone scenery predominates near Great Asby but it is the sense of freedom and escape which will remain with you before the busy market town of Appleby hoves in to view, complete with magnificent castle.

Day 1. Remain on the higher ground over Ilkley Moor rather than drop in to the town.

This day could be split with a night in either Ilkley or Addingham.

Day 2. Many will want to take more time around Malham and spend the night there. On the 2nd morning take a walk up Gordale Scar and to Malham Cove before heading off to Settle.

Day 3. For those keen on completing all 3 Peaks it is possible to climb Pen y Ghent from Stainforth and then descent to Horton in Ribblesdale and climb Ingleborough from there. There is therefore an option to then stay in Horton.

Day 4. I have suggested going over Whernside here rather than skirting the fell. The climb is at present steep on a badly eroded path.

Day 5.  Walking the length of the Howgills is superb. Adding an extra day in Newbiggin/Kirkby Stephen and climbing Wild Boar Fell, returning via Mallerstang valley is a pleasant addition to the walk.

The usual start is at Saltaire to the south.

We have listed some of the best places to stay on A Dales High Way:

Ilkley. Wheatley Arms . Treat yourself at the start or finish to the walk

Dent. The George & Dragon is in the centre of Dent and has good food & excellent beer

At the present time I have not completed ‘A Dales High Way’ as a continuous long distance walk.

The route is on my doorstep so hopefully it will not be long before I do complete it, particularly as the train service is also on my doorstep!