Addleborough is one of the few ‘stand out’ profiles in the Yorkshire Dales. Viewed from distance the long flat summit has the look of an Ingleborough or, with considerable imagination, Table Mountain!

Tackling Addleborough is straightforward with a few permissive paths creating an obvious circuit from the attractive hamlet of Thornton Rust. Being mainly on National Trust land the route is clearly, some may say strictly, signposted. The path to the summit bears west off the bridleway leading over to Semer Water.

The summit plateau of Addleborough is an interesting place. Largely flat, there are a number of seemingly randomly placed dry stone walls disguising the isolated but neat cairn. The highest spot is to the north west and has commanding views up Wensleydale. It is a good place to linger, full of interest with some bronze age markings on the stones near the highest point. Exit the summit from the north, it is initially a little steep but nothing difficult. There are various paths leading towards Culbeck from the summit. The one I normally take bypasses the farm and was probably the quickest route back to Thornton Rust via the minor road on Thornton Scar.

Try the walk round Semer Water for the best long distant views of Addleborough.

As with its twin peaks of Ingleborough and Table Mountain(!!) the flat summit of Addleborough can be confusing. Head to the north west of the plateau or just east of north where the descent is a little less steep. 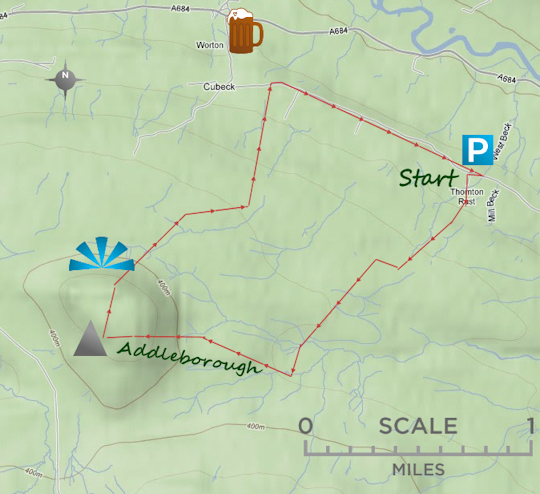 There is parking before the stream 100 yards off the road at Thornton Rust.

A little damp when I was there but not eroded so generally good. Easy to follow the route

There is nothing in Thornton Rust which lies midway between Bainbridge and Aysgarth (2 miles away) which have a pub and tea shop.