It is a straightforward climb to head for Ingleborough from Ingleton. There are no demons. However rather than return the same way drop down the northern flank and return via the limestone scars.

In my eyes Ingleborough is the best and most interesting of the 3 Peaks. There is a good choice of ways to the top, fabulous limestone scenery and views across into the Lake District as well as the Dales themselves. Climbing Ingleborough from Ingleton is the most straightforward and safe way to the summit. It is almost impossible to get lost and only in the final 100 foot steep enough to cause any concern. The summit area is however large and featureless. It may need a bit of accurate compass work to find a safe descent in the mist.

However those who go up and then retrace their steps back to Ingleton miss the great appeal of this mountain. Therefore I carried on north west over the summit area before dropping North East in to the wonderful limestone pavements of Raven Scar. This is the ascent route of the Yorkshire 3 Peaks. Here I stuck to the pavements and took a return route a few hundred feet above the road and between the two main scars. The only disadvantage being that the gradual descent at times reverted to a gradual ascent!

Ingleborough is one of the Dales 30 Mountains

It is perfectly possible to start the walk in the centre of Ingleton but if you have transport save yourself a mile each way by driving to the parking area at the east end of the village.

Navigation Tips for Ingleborough from Ingleton

On the return cross the wall and leave the paved footpath at the foot of the steep descent via the stream. For the next one and a half miles it is a question of picking your own safe route. It is better to keep high and walk along the first level of limestone. Keep to the contour line and eventually you will bend south back to the outbound path. 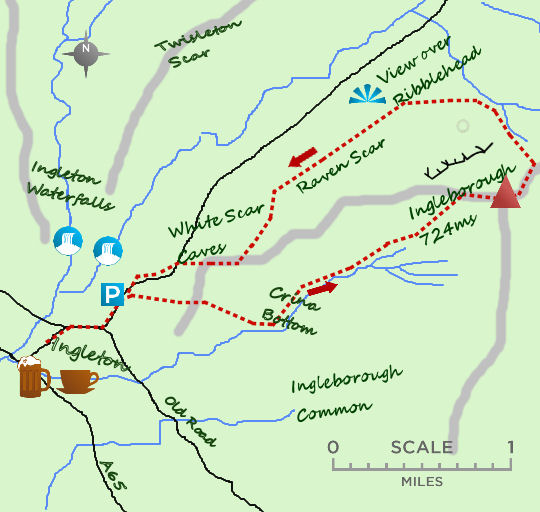 There is parking just past the last house on the B6255, head on the intermittent sheep track to join the Fell Lane and the main track.

The path up is clear and well protected, as is the one down till Raven Scar where it is more a question of follow your nose!

Ingleton has a good choice of eating and drinking hostelries