The limestone scar of Fremington Edge is the most striking feature of the area around Reeth. A walk along its broad ridge offers striking views over Arkengarthdale. The return below the edge is on a good path.

Fremington Edge overlooks Arkengarthdale, the exposed scar formed by a retreating glacier 15,000 years ago. It offers some excellent walking along its wide ridge (the best is the small path right directly above the scar). Arkengarthdale is one of my favourite dales and the bridleway that marks the return route explores it at its best. Ancient woodland and remote barns and stone building dot the valley floor.

The route is best tackled from Fremington. Here a stony track leads easily up on to the ridge. Follow the edge for two miles until it drops down to Storthwaite Hall through the remains of the spoil heaps of the limestone. On the edge there is a faint path which sticks close to the edge, this has much preferable views and drama that the more obvious path through the dry stone wall. After a mile on the edge take the small gate on your right to return to the main bridleway.

The easiest and quicker way of exploring Fremington Edge is from the small hamlet of Hurst to the east. I have marked the route on the sketch map, it is one of the easiest walks in the area and has no stiles.

This walk is a very good example of the benefits of Access Land in England. The faint path along the edge was only formed since the year 2000 when the Right to Roam became law. At that point access land (shown by the yellow background shading on 1.25,000 O/S maps) was able to be legally used. Previously you would have to follow the Right of Way on the far side of the wall. Not only is this beneficial on the Edge but the bridleway passes some lovely countryside on the return route which you can wander off to explore more fully. 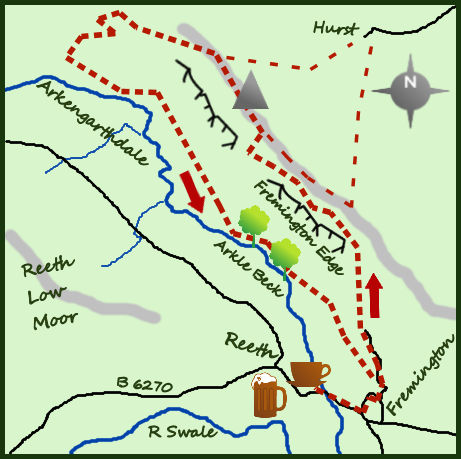 Reeth (parking on the village green has a small voluntary contribution) and then walk down the road, over the bridge to Fremington. There is a few places to park in lower Femington but none in the Upper village.

The walking on the edge is very good. The return along the bridleway i the valley is narrow in places but fie.

Reeth has pubs and cafes arranged round the lovely village green.