It is a very pleasant afternoon to walk through the grounds of Castle Howard. Unsurprisingly they are very well kept and full of interest, both historical and for the nature in the ground.

Castle Howard is one of the best and famous stately homes in England with an inspiring history. As a result it often used as a film set for dramas and historical documentaries. For older audiences Castle Howard was the setting fr Brideshead Revisited whilst for the younger audience Victoria was filmed here.  However for those of us who want to walk around the grounds of Castle Howard and only catch glimpses of the great house, it is just as enjoyable.

I was surprised by the variety of terrain (well kept gardens, lakeside walking, woods and even some pleasant paths along the ‘great avenue’) as well as the number of interesting historical ‘out houses’ to explore. The Pyramid, the Mausoleum, the Gate House and Obelisk are just some of the buildings that are on the walk. Good paths link them all. There is so much more to see than the building itself and it is a pleasure idly strolling the grounds and taking in the uniquely English atmosphere. When I was there there was the added attraction of peace, quiet and tranquility. However I would guess that is not always the case.

As you may have guessed Castle Howard is named after the Howard family who have resided here since the early 17th century. Although they were not living here at the time in 1545 Thomas Howard (Duke of Norfolk) arranged a marriage for his daughter Catherine to Henry VIII. Sadly this ended badly when she lost her head. However strategic marriages since for the family have helped keep them to their esteemed position.

Coneysthorpe is a very attractive estate village and worth a closer look. The Centenary Way long distance path runs through the centre.

Navigational Tips in the Grounds of Castle Howard

There are no difficulties in following this walk through the grounds but do stick to the paths. There are enough. 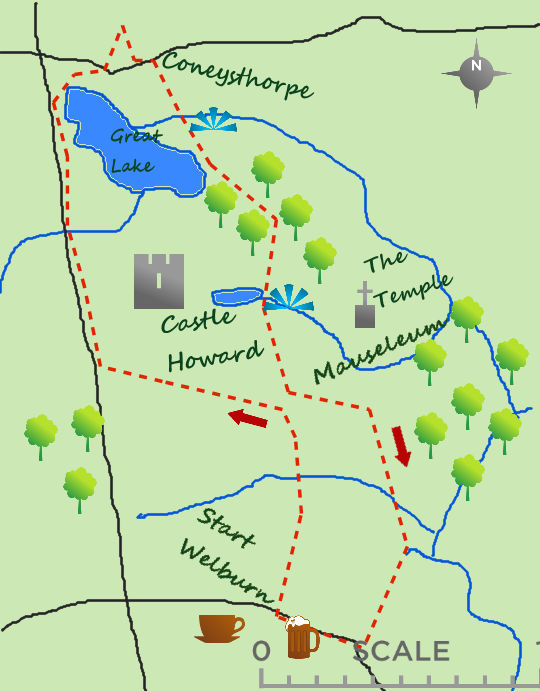 All on good, clear paths including along the Avenue (a short stretch is on the road near the Great Lake)

Kirkham Abbey and the Derwent