A sumptuous, wide grassy ridge with easy walking and outstanding views over the Northern Fells encapsulate Souther Fell. Add to that you will almost certainly have no company and Souther Fell makes for a very worthwhile slice of Lakeland.

1,713 feet high. My most recent visit to Souther Fell was on a lovely, still evening as spring starts to promise summer. Previously I had always attached Souther Fell to a circuit of nearby Bowscale and Bannerdale and never gave it the attention it deserved, a bit of an afterthought at the end of the walk. It offered a bonus Wainwright. However this particular evening I tackled it on my own with a promise of a pint in the Mill Inn at the end.

The summit, whaleback shaped, ridge was a delight. The walking was so easy and the mile long ridge offered spectacular views towards the ‘saddle’ of Blencathra (it is worth the short detour to the cairn on the west ridge). The larks sang, the lambs frollicked and the terrain was typical of this area. The entire north and east of the Lake District has the easiest walking. Even the paths are not rough and eroded like their central counterparts.

The return is via the embryonic River Glenderamackin which is fine in its early stage but difficult at present where the path bends east. The path is wet and partially destroyed by a landslip so takes some picking through. The land to the north, away from the river and path is easier but marshy in wet weather.

The summit has no cairn. This is not so much a reflection of the lack of visitors but more the lack of any loose stone.

Souther Fell is one of those special places where peace and tranquility can be found. It stands isolated and has never attracted much attention aside from those looking for a quick tick on Wainwright’s list. Climb it on its own for a short walk, particularly at the beginning or end of a summer’s day.

The awkward descent described above is the result of a slither of land just above the pub on the northern slopes of Souther Fell which is designated non access land. Therefore there is no access off the hillside directly north which would make the circuit a little bit more straightforward. Hopefully the path below will be repaired soon. 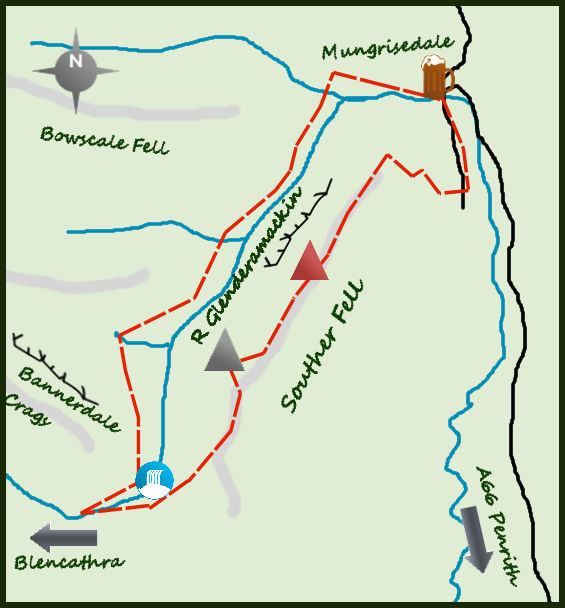 There is roadside parking on the south end of the village. The lane you want is across the river either via the pub or a bridge a little further south.

Excellent in all areas except the stretch where the river turns east on the return. Here it is awkward.

The Mill Inn in Mungrisedale is a fine Lkaeland pub, traditional but serving good beer.