Upper Dentdale offers one of my favourite walks in the Yorkshire Dales combining great views from the lovely summit of Great Knoutberry Hill with the engineering master class of Arten Gill viaduct.

Not many people visit Upper Dentdale so I was not surprised that I met nobody on the walk. Even the roads are empty so the final 2 miles of the walk, which are on tarmac, are perfectly pleasant. However the area was once famous for being the home of Dent Marble which is not in fact marble but is a dark limestone with a high fossil concentrate. Primarily used for fireplaces the marble is most dramatically shown on the 2 great viaducts of upper Dentdale which carry the famous Settle to Carlisle railway over the deep valleys.

The walk up Arten Gill passes through one of the great arches of the Arten viaduct (used in the film Mr Potter) as it travels along the bridleway on the lower slopes of Great Knoutberry Hill (Widdale Fell). Great Knoutberry itself is rather a dull lump with nothing to commend it unless, like me, you travel off route after the summit and visit the twin tarns of Widdale, the shake holes and meet the masses of swallows that live in the swallow holes.

Great Knoutberry Hill is one of the Dales 30 Mountains

This route may be best taken by train with a start and finish at Dent Station. If so travel down in to Upper Dentdale first. I did the route by car from the Sportsman’s Inn.

There are no paths on the descent to Widdale Tarns (if you choose that way) just rough featureless moors. In the cloud is down at the summit either follow the fence due west to the main bridlepath or take a compass to head for the tarns. 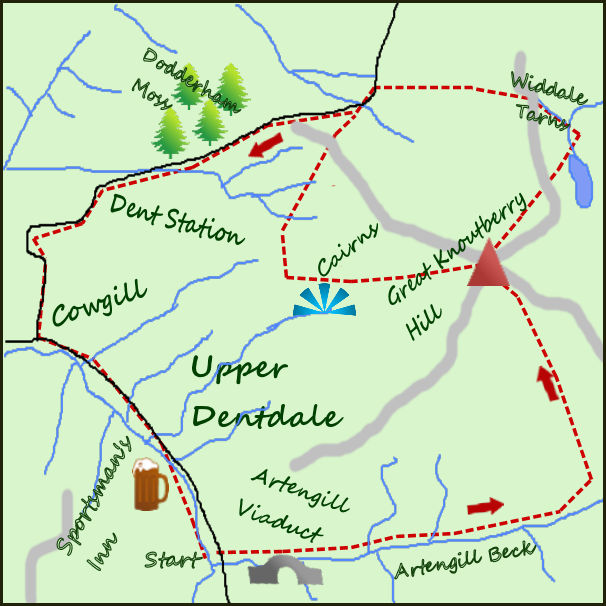 I asked the landlord if I could start at the Sportsman and he was fine. Alternatively parking is limited in a tight valley but Dent station is another possibility.

I went off the normal route from the summit which is trackless from the tarns. The summit area of Great Knoutberry can be very wet.

The Sportsman's Inn is a fine and traditional Dales pub, well worth a pint.