The route up Whernside from Dent, the highest mountain in Yorkshire, is in my opinion more enjoyable than that from Ribblehead. Dentdale is lovely and the route brings out more of the mountain’s character.

I may have climbed Whernside too many times from Ribblehead but I do now prefer the quieter, more interesting climb from Dent. There are a number of reasons for this. Prmarily the village of Dent is full of character. The cobbled streets and old pubs makes this one of the best villages in the Dales. Secondly Dentdale itself is quiet and traditional, nothing much seems to have changed over the past 100 years. Mainly though the route showcases the most interesting side of Whernside. In particular the Tree tarns is a special place, a hidden jewel. Similar are the spectacular views down Dentdale from the isolated cairn nearby.

Climb Whernside from Ribblehead but follow it up with this walk from Dent.

Whernside itself (at 2,370′) is the highest mountain in Yorkshire and has the appearance of a whale’s back. The walking along the summit ridge (the only place both walks meet) is highly enjoyable. From the road in Deepdale on the descent there is a choice to be made. Either take the path leading along the valley floor (rather than just the road) and find the many small waterfalls. Alternatively join the bridleway on Occupation Way and cross the flanks of Great Coum. This route finishes directly above Dent village. All in all the walk is a fine way to explore this excellent mountain.

Whernside is the largest of the Dales 30 Mountains

For a quicker visit to the summit park further up Deepdale on Dyke Hall Lane and return via the lower valley path.

It is easy to miss the turning uphill from the Boot of the Wold. The faint track follows the east side of the wall to the corner, carry straight on to the tarns. From the summit head due west till arriving at a pile of stones then head north west for a few metres to the corner of the wall. Follow this to the road. 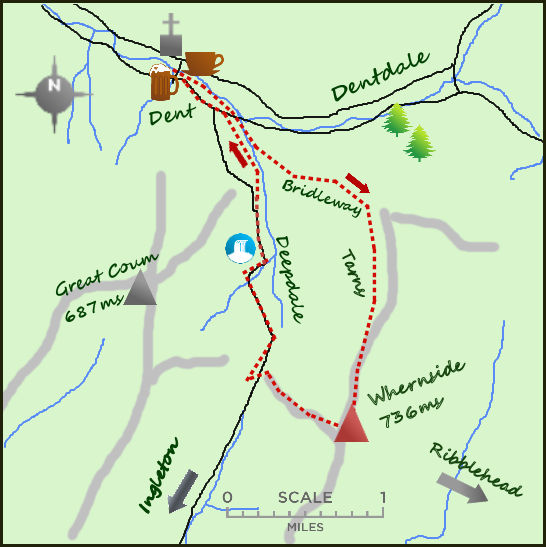 There is a large car park to the west of the village. If the short route is taken there is some limited parking at 723860.

Whernside is notoriously wet but the west side has little erosion as it is less climbed and therefore better underfoot.

Dent has a good choice of pubs and tea shops. The George and Dragon is home to one of most remote breweries in the country.