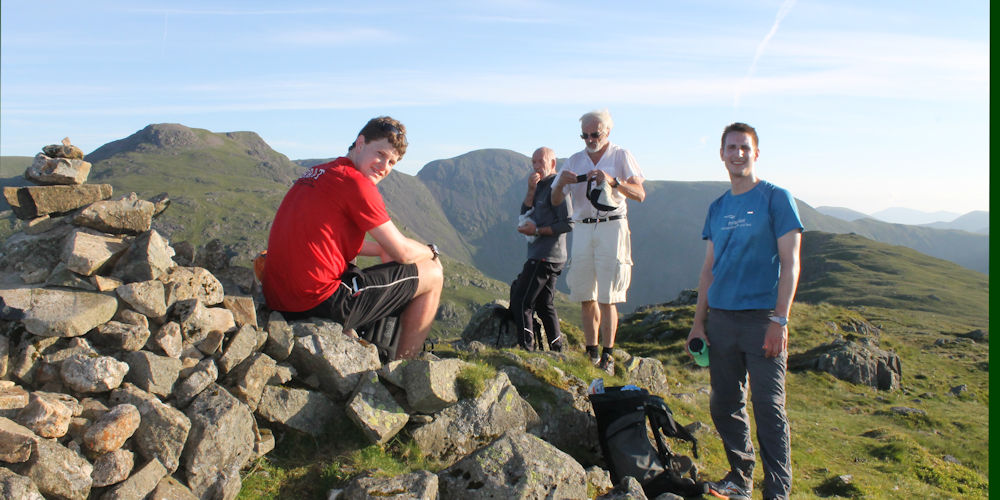 In 1932 Bob Graham, a hotelier in Keswick, completed a round of 42 Lake District peaks in 24 hours on his 42nd birthday and unwittingly started one of the great fell endurance challenges in Britain.

The round is at least 66 miles and involves 27,000 feet of ascent, presuming that no route finding errors are made.

By the end of 2013 there were 1848 members of the ‘Bob Graham club’ who had completed the route in 24 hours. It was not,however, our intention to complete the walk in 24 hours but to finish in 3 days. This sounded easy enough and indeed somewhat feeble when Bruce, our guide on Tower Ridge, told me he had completed the round in 17 hours. Nothing could have been further from the truth!

The walk had been organised by the Birmingham Medical Research Expeditionery Society (BMRES) started in 1977 to research acute mountain sickness.

We started at Dunmail Raise at 6.45am on 21 June, Midsummer day. Jo Bradwell led the way up steep slopes to Steel Fell going faster than I thought was sensible and soon we broke into sunlight. The top of Steel Fell was reached 25 minutes after setting out from Dunmail Raise. The one and only time I matched the timing required for a 24 hour round.

We continued over Calf Crag, a new summit for me, then Sergeant Man and High Raise, the highest point in the area but not an interesting summit. The magnificent Langdale Peaks of Harrison Stickle and Pike of Stickle (an old favourite) followed then a long walk to Rossett Pike. All seemed to be going well and we even found some water between Rossett Pike and Bowfell. Jo led the way up directly up Bowfell finishing in a steep rocky gully requiring some scrambling.

Relentlessly we continued over Esk Pike and Great End encountering a group of 5 speedy fell runners, exploring the route for a subsequent attempt. We kept up with them for a while but lost them between Ill Crag and Broad Crag. Flagging now I staggered up Scafell Pike where at least 100 people were enjoying the sunshine. A debate followed on the way up Scafell, Broad Stand, Lords Rake (which Neville had heard was dangerous because of concerns about a loose boulder) or the lower, but safer, Foxes Tarn.

We chose Lords Rake and the boulder stayed put as we climbed up the gully and on to Scafell. Scafell is one of the great British mountains but surely one of the most neglected. Knackered now, legs and feet hurting, we made our way down to the Wasdale Head Inn. 8 hours 20 minutes for the section. How on earth could I complete the longer sections scheduled for Sunday and Monday. Still, best enjoy the rest of the day as I downed 2 pints of grapefruit and soda and a pot of tea.

Sunday morning dawned (barely) and an earlier start. At 5.45am, with clear blue skies above, we set off up the relentlessly steep 2,000 foot climb up Yewbarrow. The beauty of the surroundings contrasted in dramatic fashion to the way I felt. It only took an hour to climb Yewbarrow but it felt considerably longer as I clutched at grass in an effort to pull myself up the slope.

It was now a magnificent morning as we continued to Red Pike then Steeple, for some reason Scoat Fell did not count as one of the 42 peaks. There followed 3 brutes, Pillar, Kirk Fell and Great Gable as my water ran out. Fortunately we met some members of the group at Beck Head. John came running across with 2 litres of water which was soon gone. I now knew what I required, 2 litres of water, an energy drink, a sandwich and 2 bars of chocolate per 7 hours of walking in the sunshine.

Refreshed we stormed up Great Gable. Soon we were traversing Green Gable, Brandreth and Grey Knotts on the way to our first pit stop at the top of Honister Pass. This was to prove a feast provided by the support team; bacon sandwiches, cheese rolls, tea, juice, chocolate and even a birthday cake as it was Jo’s 69th birthday.

An hour later we were back on the mountains climbing Dale Head (my first mountain at age 4), Hindscarth and Robinson before the long 6 mile walk down the road to Keswick in evening sunshine. We arrived at the Skiddaw Hotel at 6.30pm, surely I had done enough and should have tomorrow off!

The next day the alarm went off at 4.45am for what was to be the longest day. I have never seen Skiddaw looking so beautiful as I trudged up it in the early morning sunshine. I decided to take it slower and was soon behind Jo, Neville, Owen and Chris. However I managed to keep them in sight so as to pick out the best route.

I was pleased to get from Skiddaw to Great Calva in one hour in near perfect early morning conditions. However Blencathra gave a sterner challenge particularly the descent down Blease Fell which we had decided would be easier than Halls Fell. I reached Threlkeld for the pit stop catching up the others but still fearing the ascent up Clough Head.

Surely Clough Head is the worst mountain in the Lake District went through my head as we struggled up the steep slopes to it’s summit at just over 2,300 feet. In retrospect this may be unfair. Summits now followed relatively painlessly, Great Dodd, Watson Dodd (a flat summit, hurrah), Stybarrow Dodd, Raise, White Side, Helvellyn Lower Man and finally Helvellyn as a light shower passed. It started to dawn on me that maybe we were going to finish which had seemed unlikely for most of the last 2 days.

Nethermost Pike and Dollywaggon Pike passed and we left our rucksacks at the bottom of Fairfield. Why had Bob Graham added Fairfield, couldn’t we count Scoat Fell as a Peak, clearly not! My feet screamed with pain on every step down Fairfield. The climb up Seat Sandal was enjoyable as the evening sun appeared and I realised nothing could stop us now. Then it was down to Dunmail Raise where the cars and the drinks, some alcoholic, were waiting.

A great round and thanks to the BMRES for arranging it and their fabulous support team!

It took us 33 hours of walking to get round excluding the lunch breaks. To get round in less than 24 hours non stop is an awesome challenge and I am full of admiration for those who achieve it.

The walk divides into 5 sections, maybe 5 days would be more civilised, but however long it takes, it is a superb way to see the very best of the Lake District.