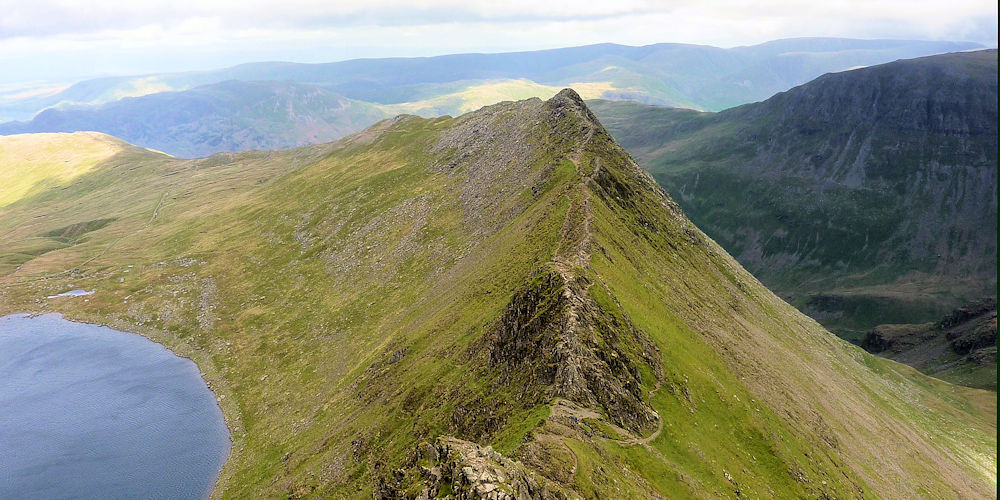 This is NOT the Bob Graham Round but a simplified version which takes in all four Lakeland 3,000s mountains (the Munros if you like) of the Lake District and by default England. Whereas the Bob Graham round is a fell race covering 72 miles, 27,000 foot (pretty much the height of Everest) and 42 Wainwright peaks the walking challenge is a mere 43 miles, over 8,000 foot and 4 peaks. Theoretically both have to be completed within 24 hours.

I have not done the Lake District 3,000s yet but it is certainly achievable for the fit fell walker. Support will be needed at certain points, particularly at Dunmail Raise and Seatoller. The start point is the Moot Hall in Keswick and my thoughts would be to do Skiddaw first and get it out of the way early, possibly in the dark before heading down Borrowdale for the central section and the Scafells.

Styhead Tarn, the Corridor Route and Scafell next before returning over Scafell Pike (route depends on the confidence to take on Broad Stand) and along the high bouldery shoulder to Esk Hause. From then I would pick a route over or round High Raise before falling down to Dunmail Raise. From then the route is straightforward over Helvellyn via Grisedale Tarn before dropping off the shoulder to the White Horse and back to Keswick. Easy!

http://www.bobgrahamclub.org.uk/ A read just because it is mind blowing how fit these runners are

http://www.mountain-adventures.co.uk/lake-district-3000-footers.html This company has a detailed explanation of the route and will organize it for you if you do not want to sort it out yourself