Perched on the far south west corner of the Lake District Black Combe sits almost on top of the sea. The climb is via an excellent path up the mountain. An alternative, longer, descent heads north and west in to remote lands.

1970′. William Wordsworth once described Black Combe as having the “amplest range of unobstructed prospect may be seen that British ground commands”. The reality is that Black Combe is unique in England in finding a mountain that rises so dramatically from the sea shore. To the north the lands are remote and rarely walked. However the views out to sea are simply stunning which is why a descent to the west is recommended. The decent to the west is on an easy sloped bridleway, but the walk back along the mountain’s eastern flanks is quite long, albeit on a good path.

My other suggestion is to climb Black Combe on a summer’s evening where the soft light does give a real feeling of peace and tranquility. Return the same way. The climb is initially quite steep but the path is excellent and height is quickly gained. With the quick gain in height many mountains appear seen from an unusual perspective. Wales, Ireland and Scotland can also be seen along with the Isle of Man as this whale back hill has sea views in three directions.

The only problem with this walk is the access as it is a long drive to the village of Whicham. Maybe though that is part of the appeal.

Best done on a warm summer’s evening where you can stop often and enjoy the views.

The western fells of the Lake District can be viewed from an unusual direction. At this stage it is well worth taking time to view these from a direction almost never seen. On the summit take out your map, orientate it and enjoy Wainwright spotting. 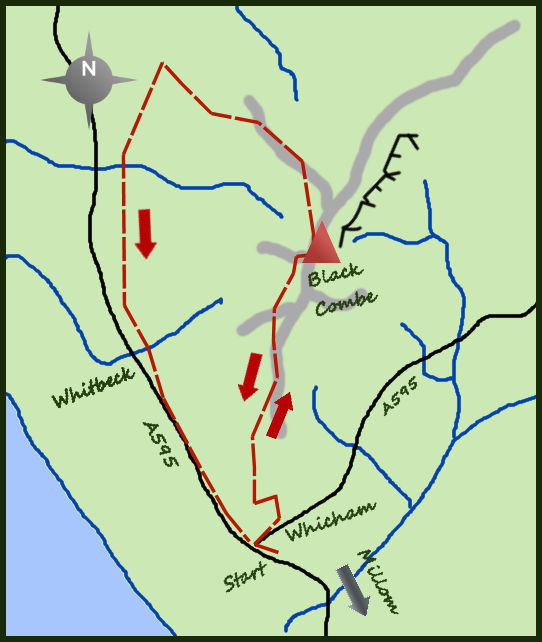 On arrival at the T junction on the A595 at Whicham park over the road to the left at a large lay by. From here return 200 metres to a footpath across the fields of Whicham, joining a lane and leading to the steep slopes of Black Combe.

Black Combe is at 1970' and the start is low. The pull up is steep but for once the path is so good it is hardly noticeable!

The local pub appeared on the verge of closing when I visited and the recommendation anyway is to travel to the village of Millom or further afield.

Fells over the Duddon Valley