Fair Snape Fell is the highest point in the Forest of Bowland. The walk up is straightforward, if at time wet. The final walk to Parlick is a delight, the walking often accompanied by gliders.

The mile between the western summit of Fair Snape Fell and Parlick is the best mile of walking in the Forest of Bowland (and competes well with the best in the Dales) The track is excellent, the views south and west impressive and distant and, when I was up there, the hang gliders and traditional gliders were decorating the skies with their bright colours. Sadly I saw little wildlife, which is unusual as this is a relatively new and large area of Open Access land which should be encouraging more native species of bird and beast.

The challenge on this walk though is how to showcase this special mile but enjoy the remainder without it seeming too much like a secondary act. The first time I visited the area I simply climbed Parlick, walked up and back but I felt I was missing something. This time I included the round of Saddle Fell, the well named Wolf Fell before reaching the ‘real’ summit of Fair Snape Fell. The climb up Saddle Fell is on an excellent bridleway. However the crossing to Fair Snape is rather a peat hopping challenge which adds sufficient interest to the walk.It is only an aperitif to the main course which is truly something to savour,

Visit the large cairn and O/S pillar which is marked Fair Snape Fell to the west of the plateau but it is not the highest point. This lies 1/2 a mile to the north east.

The highest point lies just to the north of a 3 way junction of boundaries/fences. It is a simple cairn in the middle of some peak hags, not easy to find in bad weather. It is just to the east of the north heading fence. 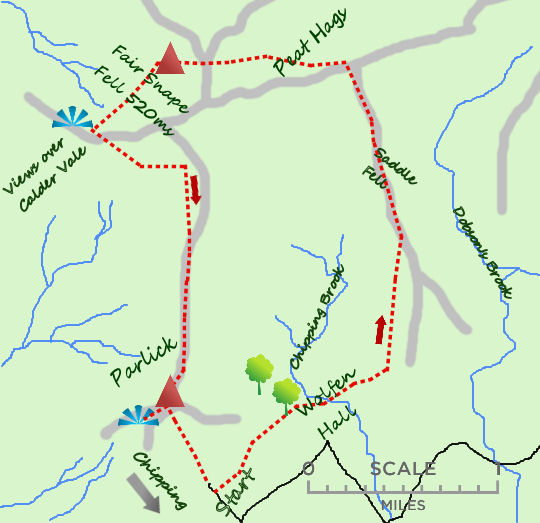 Parking is available roadside on the lane leading to Parlick. There is a footpath opposite leading through Wolfen Hall and this is the best route by leaving the 'the finest mile' to the end of the walk.

Chipping is a lovely village, off the beaten track adds to its appeal. The Sun Inn boasts the most active ghost in Lancashire!