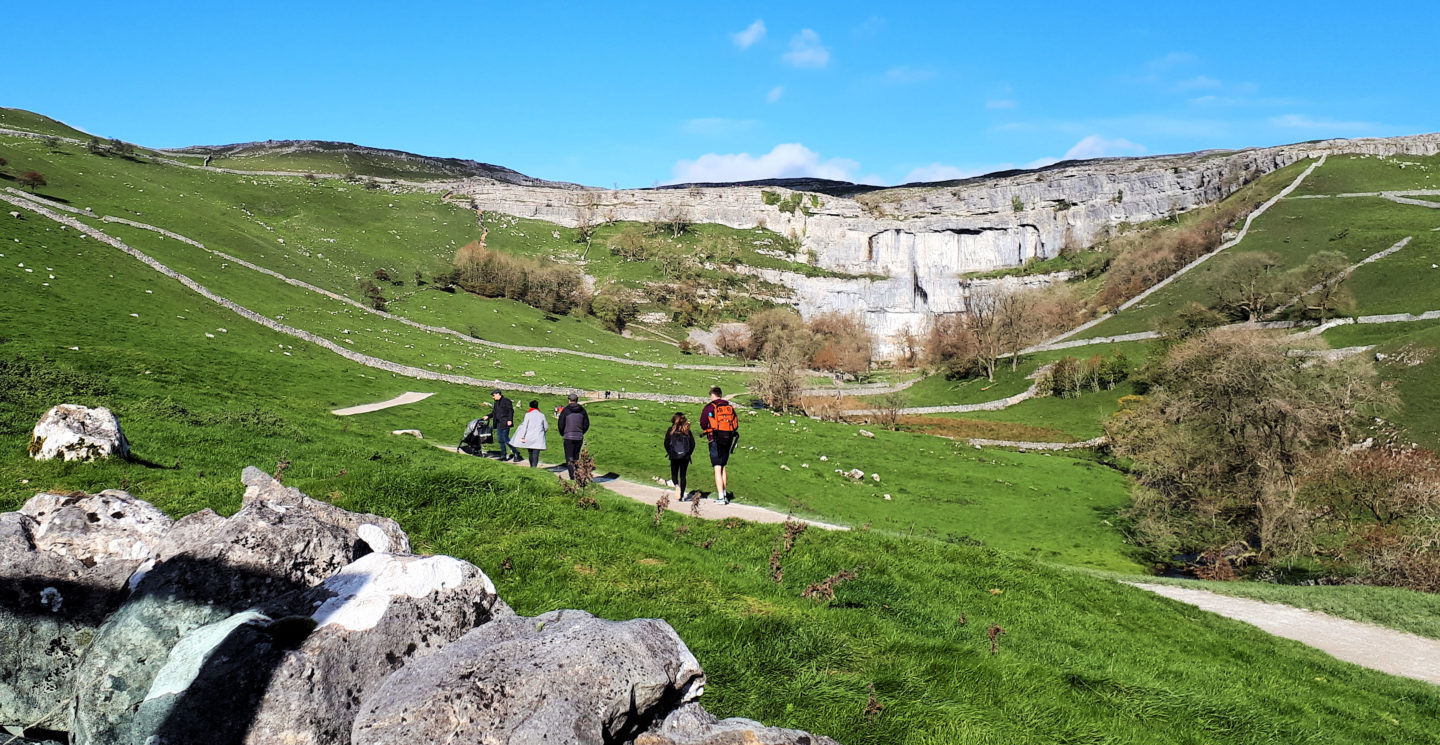 Malham Cove is a spectacular face of rock that is climbed by stone steps on its western fringe. The limestone pavements on it’s top are rightly world famous with good views over the stone walls and fields of the area.

There is one major problem with a walk to Malham Cove. It is too popular. The 1,000s of visitors who arrive in Malham walk the one mile from the village centre to stand under the impressive 250′ rock face. They take a photo and retire to one of the cafes or pubs in the village. It is probably the most popular mile of track in the Dales. Sadly only a small proportion of visitors climb the steps that lead up to the left of the rock face. If you physically can everyone should.

The limestone pavement on the summit of Malham Cove is one of the very best examples of clints (blocks) and grykes (gaps) in the Dales. Even though the rock has been smoothed out by the pounding of walkers boots it does not harm this spectacular spot. The large pavement shows how weathering and in particular ice has created fractures in the originally solid rock. These areas of weakness have gradually eroded to wider gaps creating the pavements of today.

There is no real access back down to the Cove on the eastern side. However if you carry on to the footpath under Sheriff Hill this does offer an interesting route back to Malham. Here the remains of ancient iron age settlements replace high heels, handbags and bored youths which tend to clutter the more popular path.

Recommend (from my daughter)

The limestone pavement for Malham Cove is the setting for a famous scene from Harry Potter and the Deathly Hallows. It is when Harry and Hermione were camping. My daughter took a photo from our TV of the exact place where the tent was placed. She then made it her mission to find the spot. Whether she actually did I am not sure but it helped encourage a reluctant teenager enjoy a walk through such spectacular scenery.

When you are on the pavement above Malham Cove there is an easy path that traverses the rock face to the back of the rock. It avoids the scramble across the face, particularly if the rock is wet. 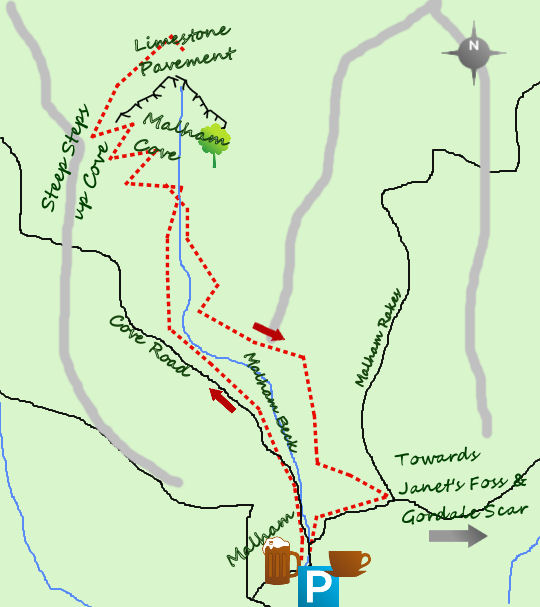 The car park at the visitor centre is the best place to park but this can become full and then parking is accepted on the side of the road towards Kirkby Malham.

The National Park have extended the wide track to the village now avoiding the trawl up the road which was uncomfortable and a little risky. The track is very good and suitable for pushchairs and wheelchairs. There are a lot of steps up to the summit of the Cove and counting them will relieve the monotony of the climb!

Malham has a good selection of pretty tea shops and 2 top walking pubs. Which one you choose usually depends on which is the least full. A second alternative is to drive the 1 1/2 miles to Kirkby Malham and enjoy a good pint at the Victoria Inn.

A walk round Malham Tarn