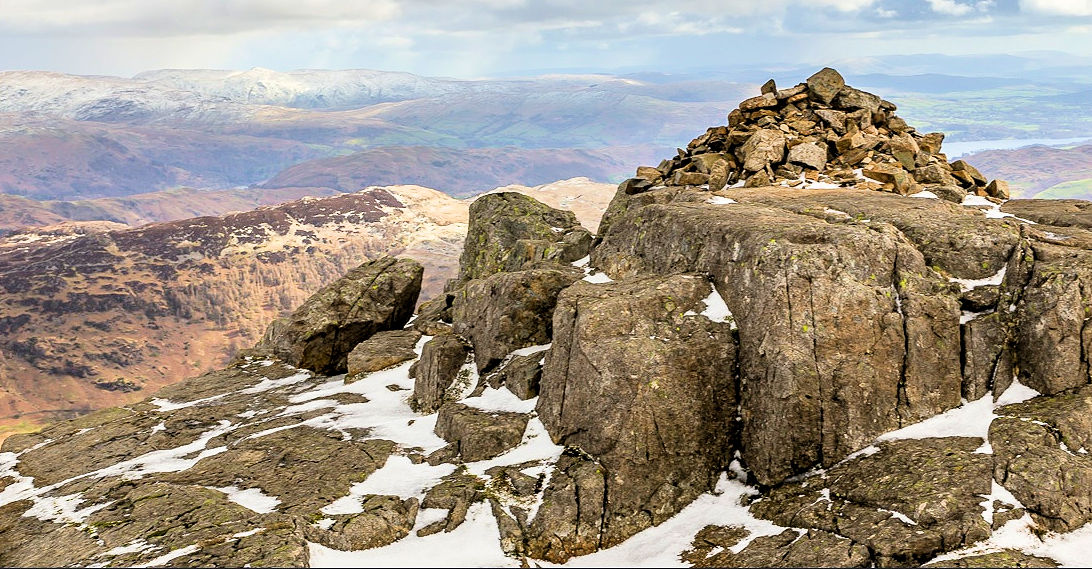 Pike o’ Blisco is a rugged Lake District mountain that overlooks the Langdale Pikes from the south. It is often added to a Crinkle Crags walk but also makes for an excellent, if steep, climb on its own.

2304′. An irresistible name combined with a true mountain profile makes Pike o’ Blisco one of my favourite mountains in the Lake District. I have categorised Pike o’ Blisco under Easy Fells but this is no easy fell such as a Catbells or Helm Crag…. unless it is climbed from the top of Wrynose Pass. The route from Langdale is steep, rocky with some genuine scrambling near the summit. In fact the difficulty I had coming off the summit last time has persuaded me to alter the more traditional route down to the east and use this as the ascent. The return is via lovely Red Tarn, Brownley Gill and the farm at Stool End.

The twin cairns of the summit are dramatically situated above a circle of rock. Some careful, or careless, route finding can take you either smoothly up or leave you with a ‘sporting’ hands on scramble. I prefer the latter although to be fair I bailed out on one cliff face as I was descending. It’s all good fun. The large, and perfectly formed, cairn on the main summit has been the subject of much debate over the years. Wainwright was much taken by the cairn when he wrote his guides. However he was then much distressed when it was vandalised a few years later. Today the cairn is once again showing signs of wear and tear. It probably needs the dedicated folk of the National Park to repair it before it crumbles once again in to a pile of rocks.

Visit the wood hut on the western slopes. It is not a refreshment hut but storage for the National Park footpath erosion team.

There are excellent if rough paths up Pike o’ Blisco. However the summit is a twin both with a rocky scramble so the paths are not obvious. In bad weather this can be confusing. The true summit is the north one. From here the path heads due south and then bends west after a couple of minutes.

If in any doubt the main summit has the large cairn! 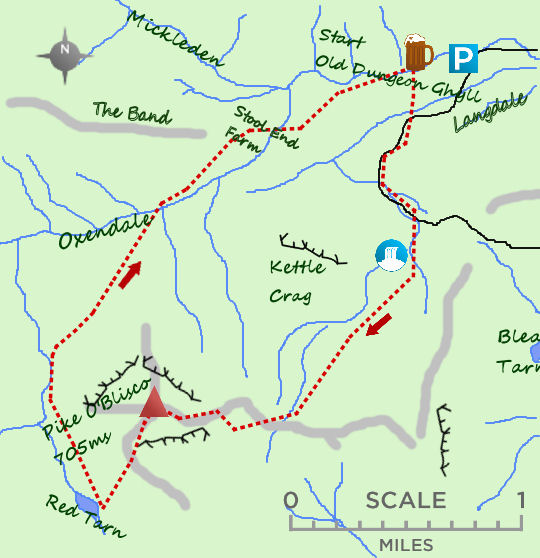 The car park at the New Dungeon Ghyll Hotel is best but expensive. Bring over £6 in change.

2,304 feet. For footpath erosion students this is a study in how it should be done. Due to Pike O Blisco's steepness the erosion, particularly to the east has required nearly 1000 foot of new path. It is not bad at all although does give the feeling of going up stairs a little.

There is a choice of Dungeon Ghyll's on the valley floor. The Climbers bar in the Old version is the best although I like travelling down to Wainwrights Inn at Chapel Style.