A walk in Upper Nidderdale

Upper Nidderdale is a remote part of the Yorkshire Dales. Physically transformed when the reservoirs were built the walk passes over wild moors, through isolated farmsteads. However they are all on excellent tracks.

It was only after living in the Dales for ten years that took a walk in Upper Nidderdale. Officially outside the National Park (it is an Area of Outstanding Natural Beauty) Nidderdale is in reality an undiscovered wilderness. The word that comes to my mind when describing Upper Nidderdale is ‘openness’. This is due to the wide panoramas and vast open spaces of the area with no steep hills to spoil the view. It is true however that there is not a lot of scenic variety, particularly towards the upper reaches of Angram and Scar House Reservoirs. However I treated this as a walk as an exploration and have returned many times. One of my overriding memory of my first visit was being attacked by an angry pheasant. In addition I was dive bombed by some gulls at Scar House, something I have not encountered before!

The walk in Upper Nidderdale is long but I think it is important to walk round the reservoirs to judge for yourself the impact on the environment. In addition take the high bridleway under Dale Edge to enjoy the vastness of this area rather than the more cluttered valley bottom. Finally enjoy some of the local names. Crossing Woo Gill and Trizzling Gill is only surpassed by Dead Man’s Hill (where the bodies of 3 tinkers were discovered….headless). All in all a very enjoyable and educational day.

Visit How Stean Gorge near Middlesmoor which has some exceptional rock scenery in a deep gorge. It is unusual for the Dales.

Do not venture any further than the west end of Angram Reservoir. The moors between here and the heights of Great Whernside are the wettest and bleakest in the Yorkshire Dales. 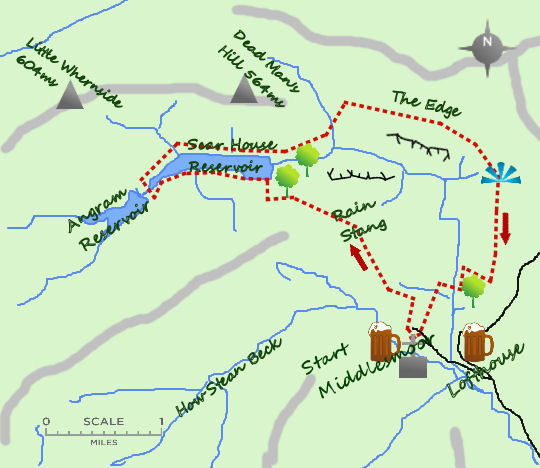 Follow Moor Lane from the car park at the top of Middlesmoor.

The route is straightforward throughout on good bridleways except in the last mile from the Shooting House 108753 when the path is more intermittant back to Middlesmoor.

The Crown Inn is a good pub in Middlesmoor although I never seem to find it open! It is 7 miles to Pateley Bridge and the valley seems well endowed with pubs and tea shops.