Home > Walks > Cataracts of the Strid

Cataracts of the Strid

The River Wharfe passes through the cataracts of the Strid up river of Bolton Abbey. It provides a lovely woodland walk that continues up to Barden Bridge on one side of the river. Return on the far bank.

I think the estate has done a wonderful job creating and maintaining the banks of the River Wharfe known as the Strid (stride). The river at this point is squeezed through a narrow valley. At one point it is only two foot wide. It creates rapids of immense power intermixed with patches of tranquil waters. Having said that I first walked the banks of the Strid during an exceptionally dry period making the river less spectacular to look. However it was still pleasant to walk alongside. In places the waters reach thirty foot deep as it has gouged its way through the ancient millstone grit leaving pools and eddies.

The Site of Special Scientific Interest was awarded to this part of the Duke of Devonshire’s estate. This was due in part for the acidic Oak Trees that line part of the river banks but also the other rare plants and fungi which grow here.  To find out more there are special tours arranged from the Strid Woods visitor centre. There is also a a shop and cafe, Dusty Bluebells. However my highlight on the walk was the graceful heron that I sat and watched for a while. My efforts at photographing the bird were poor but it was all part of the enjoyment of a day on the Strid.

As a geographer I read up on the physical background to the cataracts of the the Strid. Amongst other things it revealed the power that water can bring.

Navigation Tips on the Strid

It is very easy to follow the route along the Strid. In particular look for the many signposts set up by the estate. Just follow them. 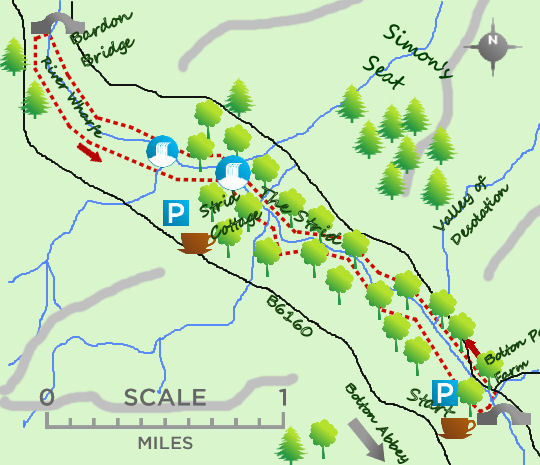 On balance I prefer starting at the Strid Woods Car park rather than the Cavendish Pavilion as it feels less busy.

An excellent track throughout but on the west bank keep to the path nearest the river for greatest interest.

There are 2 possible options, the Cavendish Pavilion which serves everything from teas, lunches and a quick beer to the more sedate Dusty Bluebells.

A walk near Appletreewick