Cross Fell from the West

Cross Fell from the west is the easiest way to climb the mountain. The walk does lack interest except on the summit plateau which is of course the highest place in England outside the Lake District.

I have climbed Cross Fell four times now and each time the summit plateau has been in cloud. Each time as well the forecast has suggested this would not be the case. Maybe the met office do not take in to account all 2,930 feet of the mountain and its moorland nature. This is a shame because the rocky summit plateau is the most interesting area on the mountain. There is a trig point, a cairn, a large cross shelter and I would imagine excellent views over to the Lake District.

The route itself is not difficult, the lower slopes are accessed by excellent farm tracks. It is only the higher part of the mountain where there is some unpleasant peaty moorland. Here too the path becomes difficult to follow, particularly on the ascent but also where the return route leaves the Pennine Way. It is this wasteland that makes it a popular spot for those following the Pennine Way to come to grief. The Mountain Rescue lads at Penrith are often called to rescue a stranded long distance walker.

This is the quickest route to Cross Fell. The climb from Garrigill to the east is a long way.

Navigation Tips on Cross Fell from the West

The descent of Cross Fell starts off on a faint path but soon after leaving the summit plateau the route leaves the Pennine Way path. There is no indication where this is and it is a confusing place. In cloud the only option is to take a compass bearing and contour the mountain side towards Wildboar Scar. Here a path emerges. 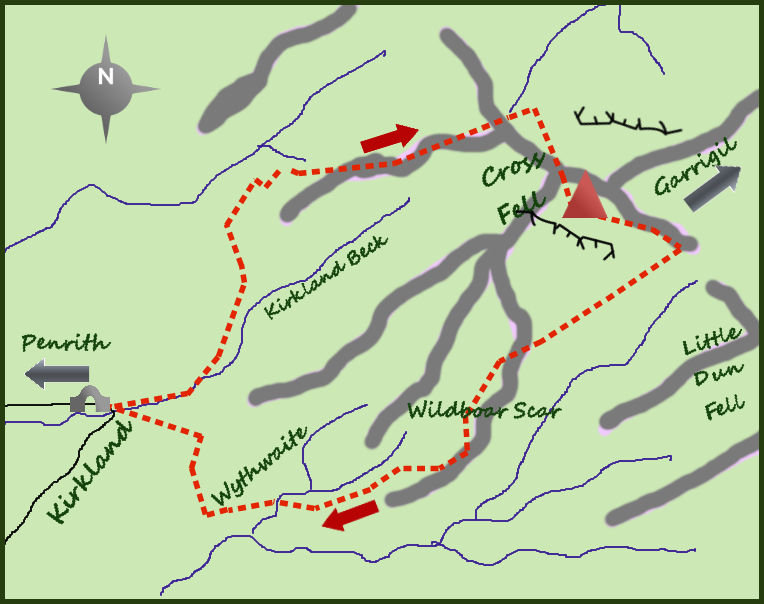 There is parking in the small village of Kirkland near the bridge. Start the walk by heading up the road towards the hall, soon turning in to a farm track.

Easy on the lower slopes, rough higher up. This is Pennine moorland and in places is rough, peat hags with plenty of water around. There are very little features on Cross Fell to orientate yourself.

The nearest pub is at Culgaith but there is very little else in these isolated villages.