Penistone Hill, just outside Haworth, is mentioned in Wuthering Heights as somewhere that Heathcliffe worked. The remnants of the mines are still there but its the views that make the walk appealing.

The Penistone Hill walk involves a short sharp climb from the village of Haworth. Haworth is, of course, famous for being the home of the Bronte sisters. They used to walk over Penistone Hill on their regular walks to the Bronte Bridge and beyond, seeking inspiration from the wild moors. The distinctive moonscape appearance of Penistone Hill is the result of sandstone quarrying. The industry was very big in the 19th century and only ceased in the 1960s. The result is a myriad of moors and craters filled with small tarns that are criss crossed by a number of paths. It is a popular place.

However to fully enjoy the walk I continued west on to the moors, adding another four miles of easy moorland walking. The contrast to Penistone Hill could not be greater. From August in to September the heather is an attractive and vibrant purple colour, a great time to take the walk.

Haworth the village is also worth exploring. The Bronte Parsonage offers an interesting tour, the church is suitably imposing and the cobbled streets hide a selection of interesting and quirky shops.

On the moors stick to the paths. Not only does it protect the moorland birds but it makes the walking so much easier.

There is a multitude of paths on Penistone Hill, just pick the best for you. At the far end of the extended walk on to the moors I never found the marked path. As a result I needed to cross over the moors where I guessed the path was. Its not far and on access land. 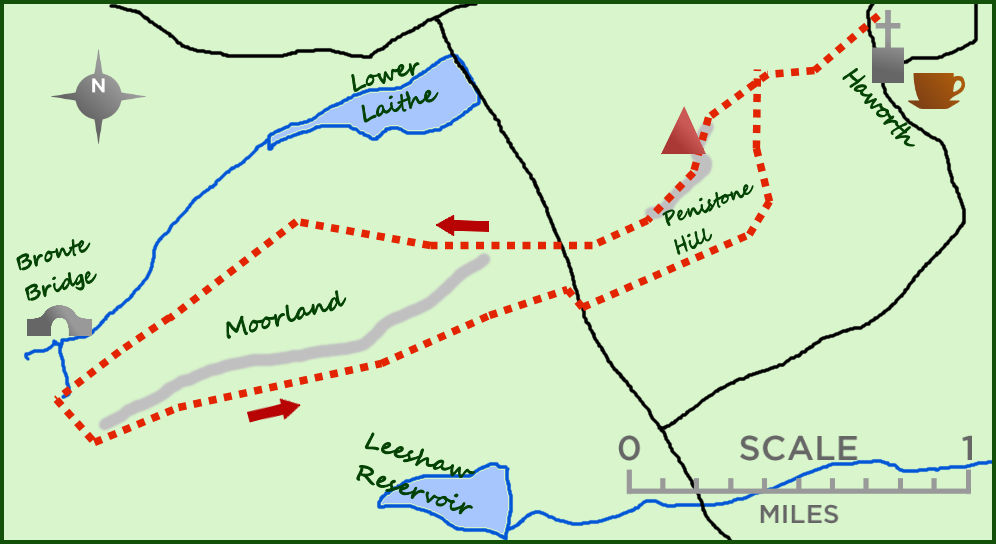 There is a number of car parks around Haworth but start the walk beside the church in the centre.

The paths are excellent throughout and aside from entering and descending in to Haworth not steep.

Haworth has some excellent cafes and a number of pubs.