The twin tarns of Gurnal Dubs and Potter Tarn form the centrepiece of an attractive area of moorland near Kendal. Combined with a walk along the River Kent to Staveley it makes for an attractive day.

I recently visited the two tarns on a dry and crisp winter’s morning. There was no-one around and it was a lovely scene of tranquility and solitude. The tarns lie half a mile apart linked by a delightful path. Surrounding the tarns is some typical Lake District scenery; bracken clad slopes, rocky knolls and hidden hollows. Of the two Gurnal Dubs is my favourite.

This return walk picks its way back to Staveley along the River Kent, in itself one of the best few miles of the Dales Way. Staveley itself has a long and distinguished history. Stretching all the way back to Roman times when the town formed a staging post between the forts of Kendal to Ambleside. More recently it was a centre for the middle aged sheep markets, had a popular rail station and was mentioned frequently by Dorothy Wordsworth as she walked through. However today it is surprisingly quiet, tourism largely passing it by.

Whilst walking the Dales Way, all the way from Ilkley, this stretch is when I really felt I had entered the Lake District. The path along the River Kent is a perfect example of riverside, Lakeland slate and attractive trees combining to form a beautiful riverside path. In the high summer months there is the added attraction of plenty of wildlife and colour. Birds, otters and wild rabbits are just some of the wildlife that it is possible to see along the river. Higher up the slopes and towards the tarns it is bracken and sheep that dominate this tranquil scene.

North of the two tarns lies a large area of remote countryside separating the valleys of Kentmere and Longsleddale. Staveley to Longsleddale walk traverses this in a circular walk, longer walk than this walk to the two tarns, but definitely worth doing.

Gurnal Dubs tarn is in Access land, Potter Tarn is not. Therefore you can wander around the tarn at Gurnal Dubs but you must stick to the path at Potter Tarn. It makes little sense but that is the largely arbitrary boundary between access and non access land. 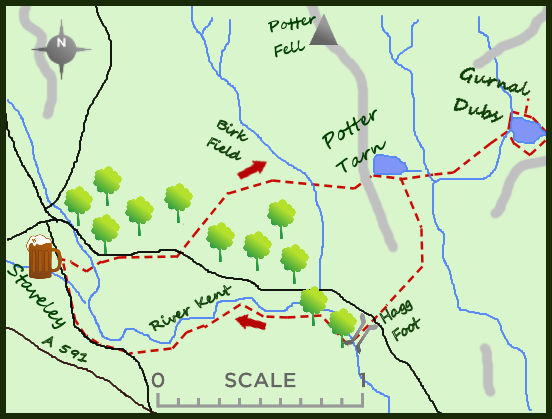 Head south to the footbridge crossing the River Kent. A quick right and left after the bridge brings you to a road heading uphill.

Good tracks on the fells and an excellent riverside path

Staveley has a choice of pubs and cafes. A special mention to the home of the Hawkshead brewery. Definitely worth a visit.