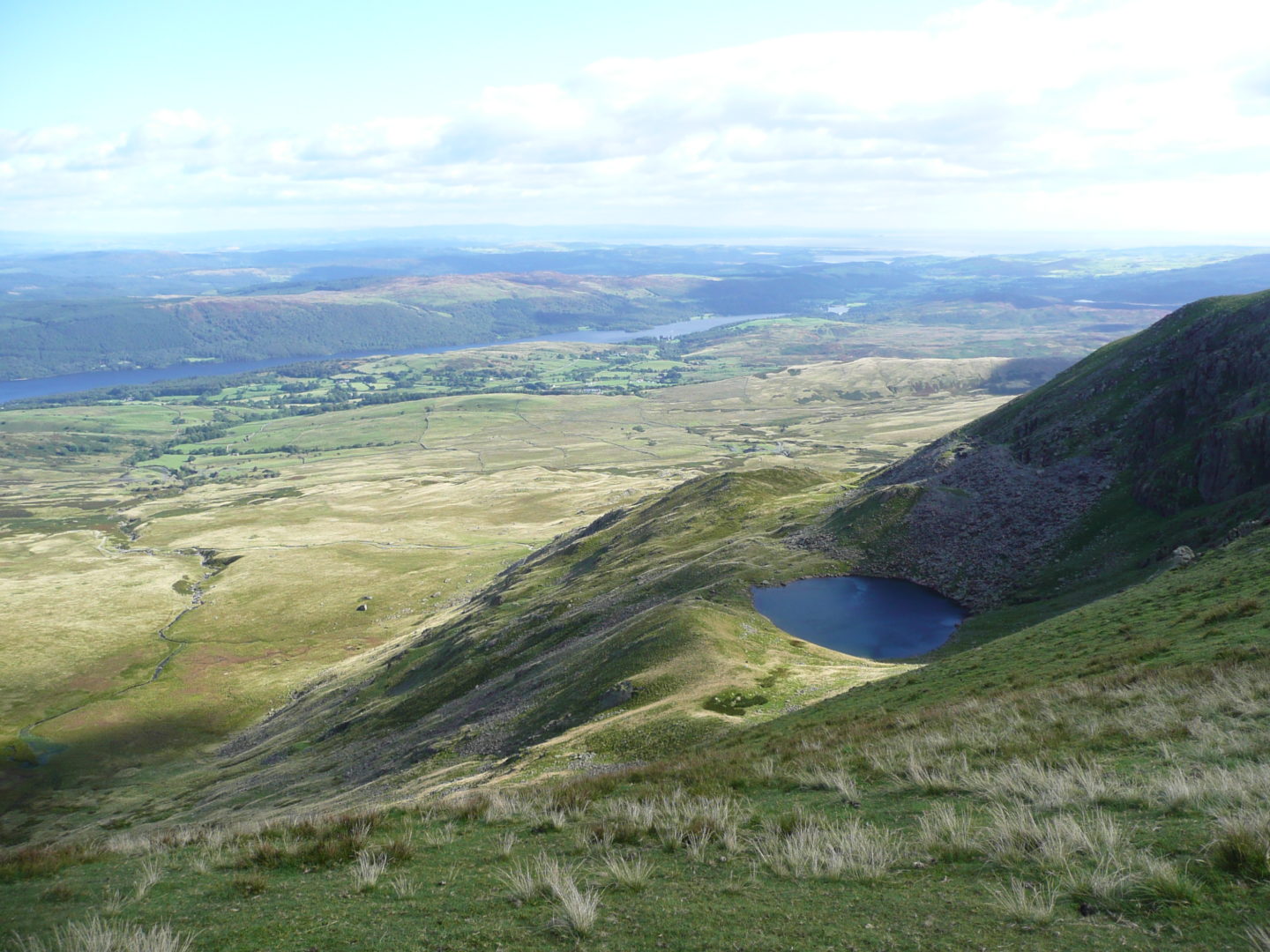 Home > About the Lake District > Coniston and Hawkshead

The area between lakes Windermere and Coniston is filled with a series of low, smooth sloped hills dominated by forestry and some pretty areas of woodland. Coniston and Hawkshead are the villages. This is not an area for wilderness or big hills (with the exception of the Coniston horseshoe) but there is plenty to keep walkers more than interested. Historical figures have left their mark, Rushkin, Donald Campbell and Beatrix Potter being the best known. Including these on one of the shorter walks adds to their attraction.

History plays its part with Hill Top House in Near Sawrey and Brantwood House on the east bank of Coniston being homes to Beatrix Potter and John Rushkin (founder of the National Trust) respectively. They are both worth visiting for different reasons. The views from Brantwood House are lovely and the situation is peaceful whilst Beatrix Potter’s House at Near Sawrey is more commercialized. However the surrounding area where she walked glorious.  Both were very involved in the conservation of the area and their legacy today should not be ignored.

Donald Campbell meanwhile was killed on Coniston Water whilst attempting to break his own world water speed record in 1967. The remains of his boat was lifted from the foot of the lake a few years ago. However his legacy is best remembered by the local ‘Bluebird’ brewery in the village centre!

Coniston is one of my favourite villages in the Lake District. It has avoided the obvious commercialism of some of its larger neighbours. The pretty white washed cottages help retain the peaceful feel to the village. Set between the higher fells of Coniston Old Man and the lake also helps to prevent sprawl and development. The Coniston fells are deservedly popular. Rather than just climbing the Old Man explore them a little closer. In particular Wetherlam and Dow Crag are excellent mountains.

The now disused copper mines of the Old Man also helped create a community in the village.  I inadvertently explored some of the mining remains one November night whilst being assessed on my Mountain Leader course. The weather was really poor so have never really looked on the mines with great affection. Coniston lake front is not sadly one of the most attractive. However non-motorised boats can be hired and a steamer runs the length of the lake in the summer months

Hawkshead may be better known than Coniston and sit only a few miles to the east but to me lacks a more rustic nature. The centre is attractive but the large woollen shop, large car park with a steady chain of coaches does it no favours. Best to stay in Hawkshead at one of its traditional guest houses or pubs, abandon the car and withdraw in to the tiny alleyways with their craft shops, the Beatrix Potter museum and cafes. It is better at night.

Nearby Tarn Hows is a famous landmark north of Grizedale. Grizedale is an artificial tarn created over a century ago by merging 3 smaller areas of water. Now it is a beautiful spot, peaceful and well managed by the National Trust.

The forest is Grizedale houses a popular adventure playground. It has many walks and cycle routes, a Go Ape Tarzan style outdoor experience and a large information centre. For those after walks on the open fells clearly it is not ideal. However as a one off I found it interesting and the walk offers an alternative in poor weather.

Near and Far Sawrey are two pretty little hamlets near the ferry across Windermere. Near Sawrey is the location of Hill Top House but Far Sawrey is the prettier with the added bonus of a pub. The remainder of the area is more peaceful but with no villages of note. The character of the Lake District changes towards the south end of Windermere and Coniston. Farmland taking over and the influence of the sea starting to take effect.

Best Walks around Coniston and Hawkshead

Tarn Hows. An easy walk on an excellent path round this lovely tarn set in woodland and rocky outcrops.

Latterbarrow & Hawkshead. A short walk to this excellent viewpoint from one of the most popular Lake District villages.

A walk in Grizedale Forest. A choice of walking opportunities from this famous outdoor playground in the forest

Beatrix Potter Country. From Hill Top at Near Sawrey the land rises through woodland and tarns with views over Windermere and Coniston.

Top o’ Selside. The land rises steeply from the the south west shore of Coniston to this lovely, rarely visited peak.

Woodland Fell & Beacon Tarn. South of the main Coniston range lies unspoilt fells with an idyllic tarn nesting amongst them.

Classic Coniston Round. A high level circuit of the fells that lie to the west of Coniston village.

Brantwood House. The wonderfully situated home of John Rushkin, who founded the National Trust and was a great friend of the Lake District

Hill Top House. The home of Beatrix Potter in Near Sawrey, the National Trust tell the tale of this famous author and conservationist.

Coniston Boating Centre is 1/2 a mile from the village and is where canoes, sailing boats and all manner of aquatic joys can be hired.

John Rushkin museum. In Coniston this museum is the story of the area and the best way of finding out it’s history.

Bluebird Brewery. Set on the Coppermines road and showcased in the Black Bull this is a celebration of great beer and a great adventurer.

Grizedale Forest. A remarkable 28 square mile of forestry converted in to an adventure playground for cyclists & walkers. Information centre and cafe.