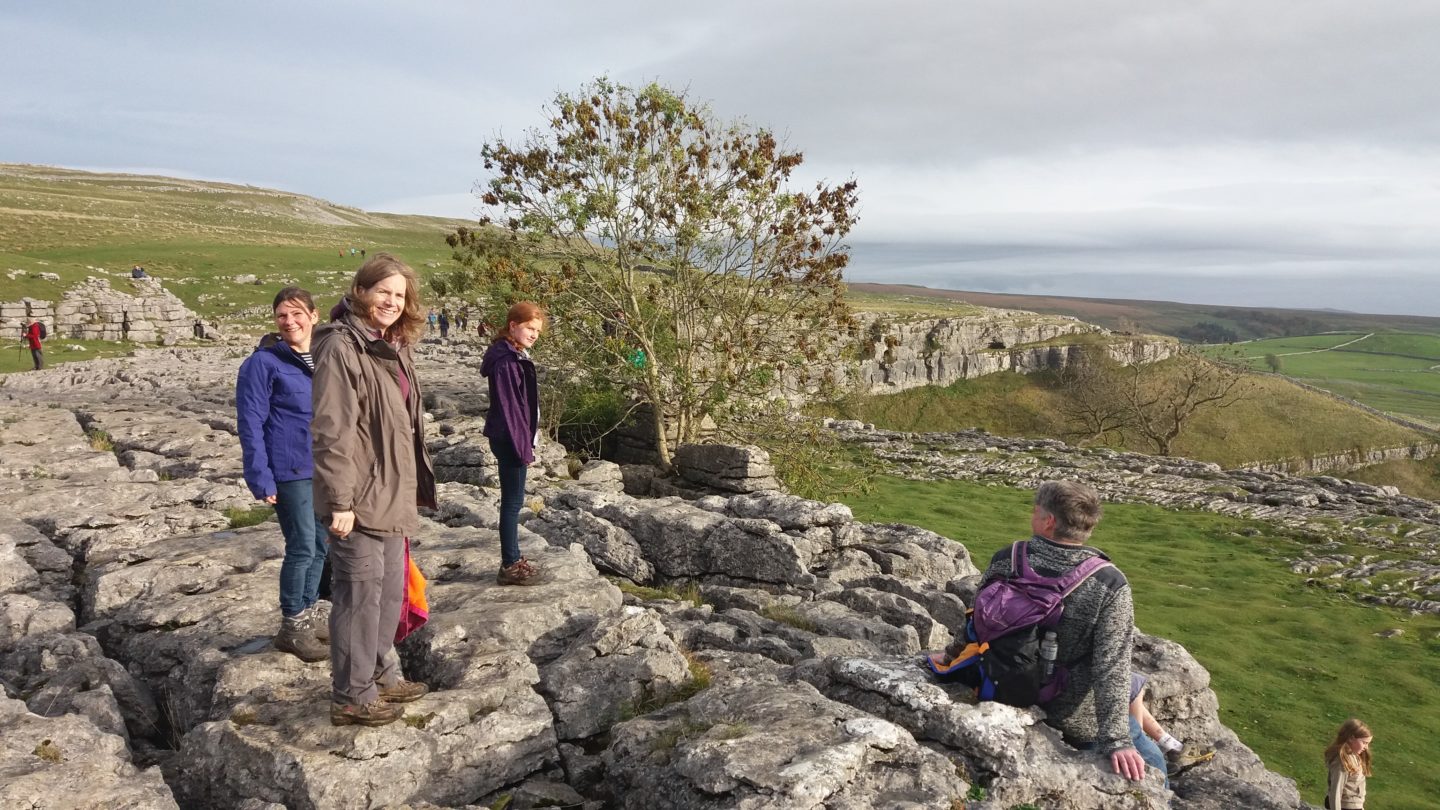 Home > About the Yorkshire Dales > Malham and Dentdale

“Malham and Dentdale are two of the smaller dales displaying great character and stunning geography.”

I have included Malham and Dentdale in the same section as, despite being geographically separated, they share many similar characteristics to each other. They are significant dales and have sufficient character and familiarity in their own right not to be classed as ‘part of one of the major dales’. Their most relevant similarity is that the village that the dale is named after is superb in both cases, full of character with almost endless walking possibilities.

Malham is the more popular of the two. With its dramatic geology the dale showcases some of the most iconic features in the Yorkshire Dales. Dent is undervalued. There are some excellent riverside walks, good mountains and a significant history in the upper part of the dale.

Getting the most out of Dentdale

Malham is the most popular village in the Yorkshire Dales and on summer days and weekends it is definitely over crowded. The village struggles to cope with a summer Saturday and the short walk to the cove is like walking down the high street of any market town. However once the effort is made to leave these hot spots the scenery is spectacular and unique to Britain. The village itself of Malham is attractive. Traditional stone buildings sit beside a small stream with a background of rolling fields, stone walls and barns.

The village of Malham has two pubs of similar character and quality. The Listers maybe older (the sign above the door suggesting a 1723 opening)  but both offer a good mix of traditional pub food, a beer garden, good beer and a separate restaurant. The Buck Inn is Grade 2 listed, has 2 large bars and is welcoming for all, the Listers more open plan and modern.  Beck Hall also has a bar and there are a number of cafes, away from a hot summer’s day it is a very pleasant place to spend some time. However it is the surroundings that make the village.

This splendid amphitheatre of rock can be seen on the approach from Skipton, it is 80 metres (260 feet high). The walk to the foot of the cove is lovely, peregrine falcons can often be seen on the cliffs, if not rock climbers can! The stream that emerges from the cave has its origins many miles away. However in 2016 water did come over the top of the cove as a traditional waterfall, the first time in living memory. On the top of the cove is a splendid limestone pavement where the Clints and Grykes of limestone offer a geological lesson of erosion over the years. Legend has it that Malham Cove is the inspiration for Charles Kingsley’s book the Water Babies whilst realty has it that the pavements are the settings for one of the Harry Potter films.

Approached by a well-built track and an attractive picnic spot Gordale Scar emerges at a bend in the valley. It is a dramatic gorge, seemingly impassible, with steep cliff sides and a tumbling stream at its head. It is possible to scramble up the rock next to the stream but extremely difficult to come down it. A public right of way goes through the gorge and has led many in to difficulties or from above a long and frustrating return trip. Viewing from below though Gordale Scar is a must see place.

A lovely setting just off the road near Gordale Scar this double waterfall makes a popular picnic spot. Apparently the Queen of the Fairies, Jennet, is rumoured to live behind the waterfall (although she can only be seen by children). Some take a pleasant swim in its cool waters.

The highest freshwater lake in England, Malham Tarn has an average depth of only 2.4 metres and a maximum of 4. The banks of the tarn are a Nature Reserve and no fishing is allowed on the tarn. Fishermen refer to it as the ‘forgotten tarn’. However Malham Tarn Centre offers a variety of courses, many residential, on the banks of the Tarn It is also a popular spot for school trips.

Dent probably stands today how Malham stood before the crowds descended. Although it is still popular on summer weekends (and during the excellent festival in June) there is still a timeless peace about the village and its cobbled streets. Charles Dickens comes to mind when I think about Dent; the church is lovely (almost perfect when covered with a coating of snow) the buildings full of character and the people friendly and welcoming.

The Dent fault line separates the carboniferous limestone to the south and the older Silurian stone further north and the different character can be clearly seen and encountered on the numerous walks which lead from the village. If Dent was more accessible it would be so much more popular, good for the local businesses but less good for those of us who have discovered this delightful dale.

Further up the valley Gawthorp boasts an interesting old cornmill whilst Cowgill has a lovely old church, a micro brewery and a 300 year old listed pub called the Sportsman.

A History of the two dales

was first mentioned in the Domeday Book under the name of Maglan, the name meaning ‘Settlement by the gravelly places’. It is on a track called Mastiles Lane where Monks once trod. Lead mining and farming later dominated the landscape until the tourists arrived in the later 20th century. Today there is much more to Malham than just a tourist centre and it is a very important conservation area. Designated a Site of Special Scientific Interest the geology has created an educational centre for the area. The Yorkshire Dales National Park has its main tourist and educational centre in Malham. To the north of Malham Tarn the Field Studies Centre has a vast array of courses for both the public and as a focus for local educational establishments who come from as far as Bradford and Leeds.

Dent has three unusual claims to historical fame. ‘The terrible knitters of Dent’ were the most productive knitters in the Yorkshire Dales; their dexterity an art form in which even the men joined in. Their talent was such that they could knit one handed whilst utilising their other hand to churn the butter or wrap the cheese. The full story is set out at the museum in Dent.

Do not be fooled in thinking Dent Station is near the village, it is 4 miles away, but it is the highest mainline station in England. The building of the Settle to Carlisle railway was a major feat with the superb viaducts at Dent Head and Arten Gill seeing up to 16 trains a day passing through each day. Finally Upper Dentdale was famous in the late 19th century for the production of Dent marble, a popular building material used for some of the Railway that runs nearby.

My favourite walks in Malhamdale and Dentdale are outlined below. For further details just click on the link.

Circuit of Malham Tarn A shortish walk through woods, a nature reserve and limestone scenery.

Malham Tarn to Littondale. A long walk over limestone pavements with views acoss the southern Dales

Malham Cove. Anyone can take this simple stroll to the magnificent limestone amphitheatre at Malham.

A walk through Dentdale. A riverside stroll from the pretty village of Dent for as long as you want.

Whernside from Dent. My favourite approach to the highest fell in the Yorkshire Dales

Upper Dentdale. Dent station, Arten Gill viaduct and the summit of Great Knoutberry are all visited on this 7 mile walk.

Aye Gill Pike from Dent. A comfortable climb to an excellent viewing point.

Other Things to do in Malham and Dentdale

Malham Smithy. A visit to Annabel Bradley’s smithy where there is a gallery and a full range of steel jewellery.

Hand Made Crafts Dent. Hand made crafts can be found in this pretty studio in Dent.

Dent Brewery. Visit the Dent Brewery based in the George and Dragon in the centre of Dent.

Heritage Centre in Dent Telling the story of Dentdale through the ages the centre is open most days in the summer.